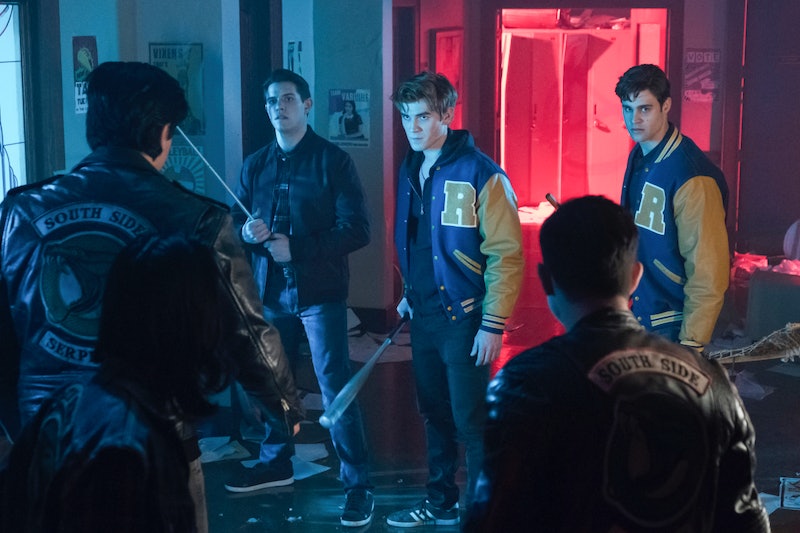 Spoilers for Riverdale Season 2, Chapter Thirty-Four ahead. The penultimate episode of Riverdale Season 2 comes in swinging — literally. Titled "Judgment Day," Chapter Thirty-Four opens with the Black Hood wielding an axe at Cheryl Blossom's head. However, she proves to be more than capable, fending the masked intruder off in a Red Riding Hood-esque cape and an intimidatingly large bow and arrow. But the real kicker comes when viewers discover that the Black Hood is later in two places at once — at the Cooper residence and simultaneously at the Andrews'. Who is the second Black Hood on Riverdale?

Fortunately, one of these killers has finally been unmasked. As many suspected, the man beneath the hood is none other than Hal Cooper , who, after Cheryl shoots him with an arrow, goes to the hospital to be treated, then kills the doctor and returns home. There, he sits Betty and Alice down and makes them watch a video of him as a child.

In it, viewers learn some illuminating things about Hal's childhood and subsequent inner darkness. "Your father did something very noble, Harold," Hal's mother says off-screen. "He took care of that Conway family. They were sinners. And what happens to sinners?" "Sinners have to die," a young Hal answers obediently. And it appears as if he's taken his mother's words to heart, finishing what his father (and grandfather) started long ago. Hal admits to shooting Mr. Andrews and killing Midge, Miss Grundy, the Sugar Man, and the doctor back at the hospital. He also illuminates some gray areas in the Cooper-Blossom family tree, explaining that his grandpappy Cooper killed grandpappy Blossom and took on the Cooper name. The Conways, however, knew their dark secret, so Hal's father killed them. "What are you telling us, Hal?" says Alice. "That I have a darkness, Alice," he answers. "The same darkness my father had. The same darkness his father had. And now it lives in Betty."

So, given that Hal is with Alice and Betty this whole time, who shoots Archie's dad (for the second time) back at the Andrews' house? Luckily, Fred is wearing a bullet-proof vest and isn't hurt. What's more, Hal admits that he wasn't the one who opened fire at the mayoral debate, a few episodes back, although the shooter was dressed as the Black Hood, too. There is a theory floating around saying Hal has an identical twin brother, and they've been taking turns wearing the hood, à la The Prestige (oops, spoilers for The Prestige).

Before you dismiss this outright, keep in mind that twins have been a consistent theme so far in Riverdale, with Cheryl and Jason Blossom — the original twins, as well as Polly's twin babies, Juniper and Dagwood. Could the Cooper-Blossom lineage include an evil, third set of twins? It sounds very soapy and over-the-top, yes, but when has Riverdale been anything but?

As for who Hal's accomplice is, there are still several likely candidates — characters who were predicted to be the OG Black Hood, including Chic, Polly (remember that Cooper darkness), and Sheriff Keller. Laura Bradley over at Vanity Fair thinks that Hiram Lodge has something to do with it. And his ick factor has definitely been mounting each week with those secret alliances of his, not to mention that Hiram was discovered to be paying the Dark Circle to wreak mayhem in town. "What better way to ensure that the chaos consuming Riverdale reaches a fever pitch than to guarantee that the town is also cowering in fear of a serial killer?" Bradley theorized.

Whoever ends up being Hal's literal partner in crime, it's awful to remember just how much pain he's caused his daughter as the Black Hood. Just think about it: Every time Betty heard that triggering "Lollipop" ringtone, her father was on the other end. Like the similarly misled Hiram, Hal believed he was doing it for the greater good — purging Riverdale of sinners, however, misguided his motives. Perhaps that hints that Hiram is the second one?

In any case, with Cheryl running around in her cherry red robe, it looks like Riverdale now has three hooded figures in their midst. Just don't ask Cheryl to wear a mask — she'd hate to do anything anonymously, especially if she's doing something noble, like saving Riverdale. Hopefully she can help unmask the second Black Hood before it's too late.