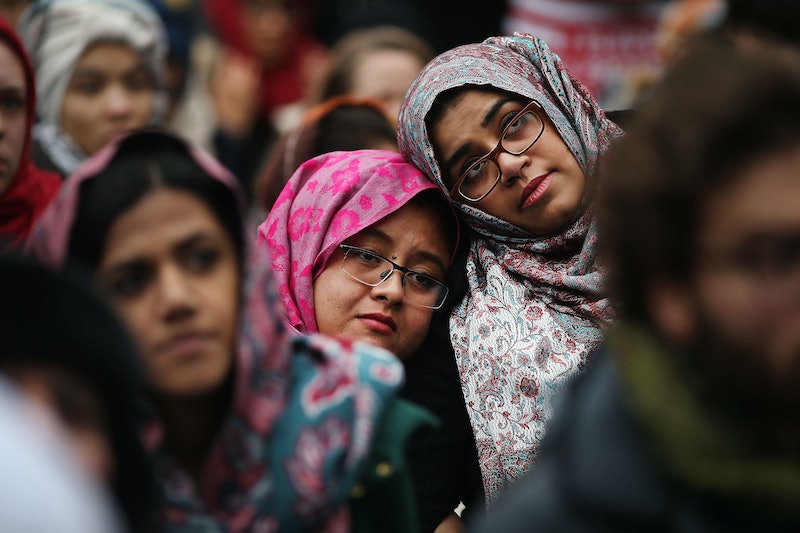 Islamophobia is not a new phenomenon. Muslim men and women both face a distressingly broad range of xenophobia, suspicion, and exclusionary attitudes from our society. But Muslim women in particular encounter gendered Islamophobia, wherein their perceived religious and ethnic status along with their gender becomes the target of verbal and sometimes physical attacks. In such a world, we need a Muslim Women's Day more than ever.

"It seemed natural and necessary to create an occasion like Muslim Women's Day for this Women's History Month," Amani Al-Khatahtbeh, the founder of MuslimGirl, tells Bustle. "We're on the heels of widespread conversations surrounding the Muslim Ban and even the women's movement, and it comes at a time when Muslim women are being increasingly targeted for their practice. Muslim Women's Day is a positive response to this critical moment by celebrating a marginalized community that needs the public support right now."

Anti-Muslim animus became more than evident after 9/11, but it is worth remembering that the roots of Islam in the context of the United States of America and subsequent American hostility to Muslims goes back to the time when Africans were first enslaved and forced to come to the Americas.

According to the Muslim Public Affairs Council, somewhere between 15 to 30 percent of the slaves in antebellum America were Muslims. With such a complicated and extended presence — replete with bigotry, ostracization, and many other struggles — Muslim Women's Day can be a critical moment to analyze the presence of Islam in the United States, specifically for Muslim women.

A recent survey from the Institute for Social Policy and Understanding showed that Muslim women are more likely to report discrimination compared to their male counterparts. Furthermore, they are also more likely to report heightened anxiety and fear for their personal well-being compared to male peers. After Donald Trump became president, many Muslim women feared for their safety due to the nature of Trump's campaign promises, which included a virtual ban on Muslims from certain countries coming to America.

Even in such precarious times, the report indicates that Muslim women remain exceptionally steadfast in their beliefs by being no more likely than Muslim men to change their outwardly appearance (some Muslims, out of justified fear of retaliation, often shave their beards or cease to wear religious apparel to appear "less Muslim"). Muslim Women's Day is a great moment to highlight such unwavering commitment to self-empowerment among Muslim women.

Although there is no dearth of coverage on Islam, there is a tendency to speak about Muslim women rather than allowing them to speak for themselves. Al-Khatahtbeh is aware of this, and she says Muslim Women's Day is about passing the mic to Muslim women who can talk about their experiences.

"Muslim women have been increasingly bearing the brunt these days of anti-Muslim bigotry and Islamophobic policies like the Muslim Ban," Al-Khatahtbeh explains. "Yet we rarely center Muslim women's voices in the discourse or allow them the opportunity to represent themselves in the public space. This is a day when not only are our allies giving us the space to talk back, but also to talk about whatever we want and represent ourselves however we want."

For those wondering how they can be part of the celebration, Muslim Girl laid out three ways to participate. You can start by amplifying Muslim women's voices on social media. You can share stories that center on one of the many Muslim women experiences. And you can share a message of unity and solidarity by using the hashtag #MuslimWomensDay.

In a political climate where being visibly Muslim means there's an unfortunate possibility of hostility, Muslim Women's Day provides both Muslims and non-Muslims with the prime opportunity to open conversations with each other. Apart from establishing the need to understand and celebrate diversity, Muslim Women's Day is most crucially devoted to dispelling a variety of myths about Muslim women who are often mischaracterized as subjugated and oppressed women who lack the agency to speak and act for themselves.

Nothing could be further from the truth and Muslim Women's Day is about proving that — plus much, much more.

More like this
Mel B Speaks Out Against Domestic Violence In A Powerful Speech
By Sophie McEvoy
Chris Kaba's Family Continue Fight For Justice After Viewing Police Bodycam Footage
By Sophie McEvoy
Romance Authors Are Mobilizing For Reproductive Rights
By Natalia Perez-Gonzalez
Bustle Daily Newsletter: October 4, 2022
By Hayley Schueneman
Get Even More From Bustle — Sign Up For The Newsletter