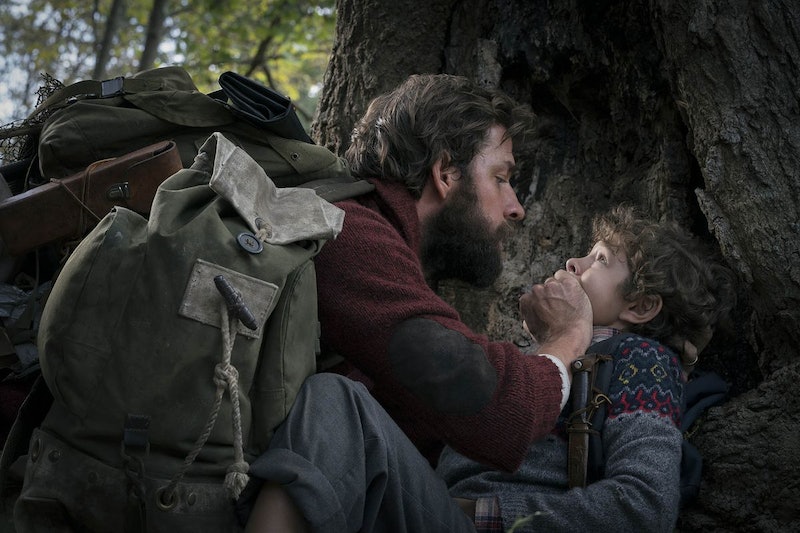 The best horror movies take something simple, even primal, and turn it on us. It Follows transformed fears surrounding sexual intimacy into a literal, unshakeable killing curse. The Texas Chainsaw Massacre applied the casual brutality of farm slaughter directly to humans, to devastating effect. And A Quiet Place, the new film from actor and director John Krasinski, takes one of humanity's main means of communicating and understanding the world, merges it with that conditioned dread of cinematic silence, and flips sound itself into a source of fear. In A Quiet Place, silence is terrifying, and the reason why that is is even more chill-inducing.

It's a common conversational trick that if you want to get someone to spill their guts, don't talk — just listen. They'll do the rest, chatting nervously just to fill the space. We live in a saturated world with a constant bombardment of audiovisual stimuli and distractions, and when we're surrounded by noise, silence and pauses can feel unnerving and unnatural. Movies, especially horror films, have conditioned us to dread silence; with blasting soundtracks designed to crank emotions to their hilt and plenty of screaming, silences are the calm before the storm, the short respite designed to make the following sudden pounce or scare heightened by contrast. So when that absence hits, like it does in A Quiet Place, our brains go on high alert, waiting for the drop.

Small spoilers ahead. Starring Krasinksi and real-life wife Emily Blunt, the new movie, out now, quickly establishes high stakes for both the characters' family and the audience. After a wordless pharmacy raid and careful tiptoeing through a ravaged town, the couple's youngest son sets off a toy that lands like a grating bomb after the stillness. He's quickly surrounded by monsters, who, in the vein of other excellent creature features like Alien and Predator, are intelligent, aware, and able to hunt humans mercilessly down with their adaptation. Here, blind and with a giant membrane acting as enormous eardrum, the creatures' extremely sensitive hearing lets them snatch anyone making the slightest noise.

A Quiet Place's gimmick plays on taking sound for granted. The entire family is conveniently fluent in sign language, as their oldest daughter is deaf. Played by Millicent Simmons, who in real life has been deaf since infancy, the movie toes the line between stunt casting and acknowledgement of audio presumptions; it makes visible the inconveniences (now life-or-death matters) that able-bodied people would normally never think of unless it affected their lives directly.

Other movies and shows have used omission of sound to similar amazing effect, most notably Buffy The Vampire Slayer's iconic episode "Hush". As author Amy Pascal noted in Business Insider, writer Joss Whedon had to expertly "strip away a form of communication we often misuse and take for granted and explore how easy it is to slip into isolation without it." The silence of the hour forced both audience and actors into different modes of expression and storytelling, and it made for a terrifying, exhilarating hour.

As Dolby reports, George Lucas famously said that sound is 50 percent of movies; Danny Boyle topped that by claiming it was 70-80 percent. Even before taking a soundtrack into consideration, audio mixing of dialogue and sound effects literally shapes a movie, something understood since the dawn of cinema.

Even so-called "silent movies" were intended to be seen with sound accompaniment, which makes A Quiet Place's intentionally mute opening scene all the more eerie. As reviewer K. Austin Collins pointed out in Ringer, "Krasinski’s film dares to spend its opening five or so minutes basked in complete silence, when candy wrappers in the theater are still being shredded open and the dozens of busy hands grabbing popcorn by the fistful can practically be heard out in the parking lot."

What we think of as silence is really a lack of intentional noise — talking, moving, scuffling. We've all been that person coming in late to a live performance, squeaking down the aisle, painfully aware of our every movement and the entire audience's (and performer's) ability to hear it. The ingenious opening of A Quiet Place forces audiences to be fully aware of their own noise and makes them complicit, a device used in classic films like Rififi, which puts the audience on the thieves' side of audio as they attempt to silently break into a bank.

A Quiet Place makes its own odd presumption, though, that there is no such thing as true silence. Numerous reviews note that even without the film's shrill soundtrack, the gentle ambient noises of leaves and wind become more prominent in the sound mix. Within the world of the film, the family's attempt to build a soundproof shelter is admirable, but nearly impossible. A complete absence of noise could only exist in a vacuum, where sound waves can't travel. The closest thing to a real-life Quiet Place is a small chamber in Minnesota at Orfield Laboratories that blocks out 99 percent of all external sound. Guinness certified it as the quietest place on Earth. And no one can spend more than an hour in there without going nearly insane.

It turns out when you remove noises, you still hear. The sounds of your own body processing become unbearably loud, and in the absence of audio stimuli, the brain begins filling in the blanks itself, causing auditory hallucinations (in small doses, this is the therapeutic idea behind sensory deprivation chambers, which also warn against negative consequences if experienced too long).

Results vary when it comes to studies on whether noise helps us focus or overtaxes the processing center of our minds. Part of the explanation is the variety of music (lyrics of any kind, especially catchy ones distract, while classical seems to encourage spatial thinking), but there's also the correlation between ADHD and autism spectrum people using music as "white noise" to cancel out other distractions, and sound being the distraction in the first place.

In an ever-busier and louder society, this could mean a volume arms race where everyone loses. With the signal-to-noise ratio growing slimmer every day, a film like A Quiet Place might just jolt us into considering the sounds we make and take in a little more carefully.

More like this
This James Bond Event At Abbey Road Studios Was A 007 Fan's Dream
By Samantha Rollins
The 'Love, Lizzo' Harry Styles Scene Is Just 1 Moment That Made Fans Feel Seen
By Brad Witter
These ‘Love Actually’ Plotlines Are “Out Of Date,” According To Director Richard Curtis
By Grace Wehniainen
This Iconic ‘Love Actually’ Scene Drove Alan Rickman “Insane”
By Grace Wehniainen
Get Even More From Bustle — Sign Up For The Newsletter