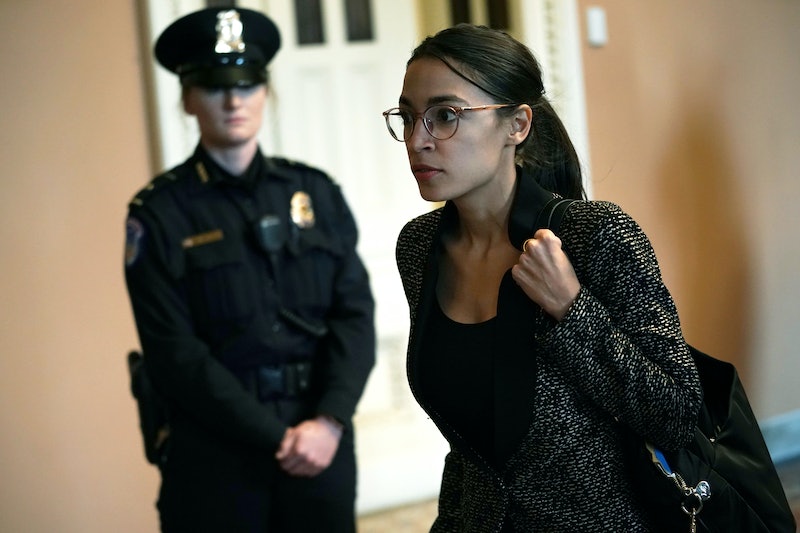 On Wednesday evening, many people might have been surprised by the news of Alexandria Ocasio-Cortez's government shutdown vote. Per The New York Post, Ocasio-Cortez was the only Democrat to vote against the short-term bill aimed at reopening the government on Wednesday afternoon — and she had a pointed reason.

In an Instagram story, Ocasio-Cortez explained her decision had everything to do with the fact that the bill funded ICE. The lawmaker said,

Most of our votes are pretty straightforward, but today was a tough/nuanced call. We didn't vote with the party because one of the spending bills included ICE funding, and our community felt strongly about not funding that.

As Huffington Post reports, Ocasio-Cortez called for the abolition of ICE at many points during her campaign for Congress.

To The New York Post after the vote, Ocasio-Cortez said, “We were having conversations with our community after we voted for DHS [Department of Homeland Security] funding the first time. We’re hearing back a lot from our local community and they’re uncomfortable with any vote on funding for ICE.”

A spokesman for Ocasio-Cortez further confirmed to the publication that the Congress member was now a "solid no for funding ICE at all," and that she would not be voting for any DHS funding that included ICE in any provision, even it meant reopening the government.

The government shutdown has now been going on for 34 days; over 800,000 federal workers have not received a paycheck in just under five weeks.

In an appearance on The Late Show with Stephen Colbert on Monday, Ocasio-Cortez got candid with the talk show host about what it was like to be an elected official during the shutdown.

She said, “We can’t properly set up our district offices, we can’t get laptops delivered, we can’t start doing the work that we were elected here to do. It takes the green stuff and those workers are furloughed.”

Ocasio-Cortez then added, jokingly, "The bright side is that it gives us a lot more free time to make trouble.” She then told Colbert about her now-famous attempt to track down Mitch McConnell with several other Democratic lawmakers, in the effort to get him to call for a vote in Congress to reopen the government.

On Wednesday, in addition to voting no against the Democratic resolution to reopen the government, Ocasio-Cortez also took the time to call out Sen. Lindsey Graham for his statement that Nancy Pelosi's decision to block POTUS from giving the SOTU was a "new low."

Ocasio-Cortez tweeted, "According to @LindseyGrahamSC, the President failing to condemn neo-nazis, forcing thousands of federal workers to go to food pantries,& risking all their credit scores is whatever, but not letting the President march down the House Floor until we pay people first is 'a new low.'"

Graham responded to Ocasio-Cortez in a series of tweets that made light of climate change and suggested that the freshman Congress member wanted the United States to be transformed into a country of "Venezuelan socialists."

For now, Ocasio-Cortez remains one of the many politicians who has established a steadfast position about what she is and isn't willing to compromise on, in order to reopen the government. Only the coming days will tell if a compromise across the partisan aisle will be reached.