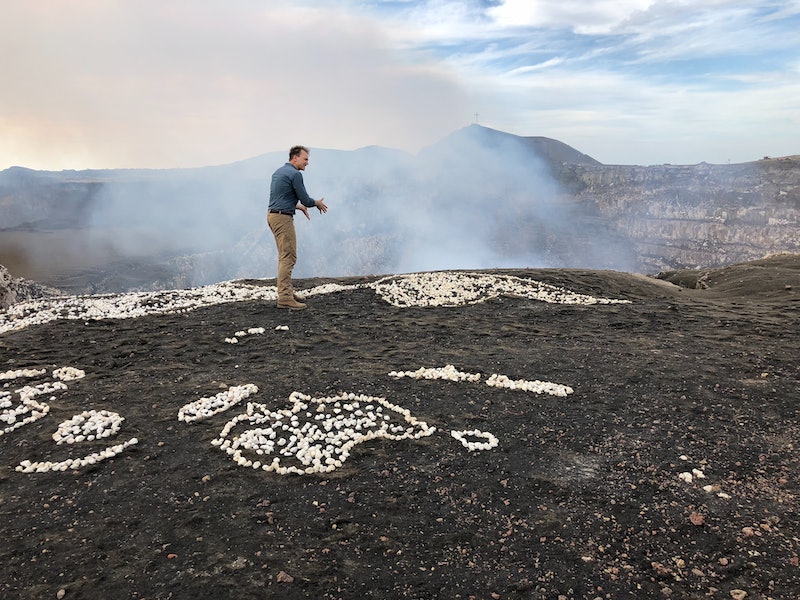 Phil Keoghan can't believe that I'd never left America before this trip to Spain. We're sitting in the lobby of a hotel designed to look like the bottles of cava (the country's delicious take on sparkling wine) made on the premises. In the last 24 hours, I've had a crash course in traveling abroad. I flew nearly 15 hours and landed in a country whose language I didn't know but whose culture I was eager to learn about. It's fitting that the purpose of my first overseas trip is to witness the filming of National Geographic's Explorer, which Phil Keoghan is taking over hosting for the show's 31st year on television. And while exploring may be new to me, it's old hat for Keoghan, who also hosts The Amazing Race and has traveled to over a hundred countries.

"I’m so excited that this is your first overseas trip," he tells me. And he means it. There are few people as earnest about travel as Keoghan: He once road-tripped across America while listening to audiobooks about the areas he was driving though. So even though he's a seasoned world traveler, he's always eager to learn about a new place as a first-time visitor. It's this never-ending thirst for knowledge that makes him the perfect host of Explorer.

"Phil brings so much passion and energy to every shoot and to the show in general," executive producer Gretchen Eisele says. "He has a natural curiosity that’s right in line with what Explorer is as a series ... He just likes to soak up the world."

And when Explorer premieres Nov. 12 at 10 p.m. on the National Geographic Channel, you'll want to soak it up with him — especially if you're already a fan of The Amazing Race. Here's why Explorer is going to be a must-see.

The Explorer series is close to Keoghan's heart — and it shows

Keoghan says that way before he came to America from New Zealand and landed his gig on The Amazing Race, his dream hosting job was Explorer. "Growing up as the son of a scientist, I grew up exploring the world with my parents... so the love of travel and adventure and meeting people, all of that was in me," he says.

He loved the series so much that he and his then-girlfriend, now-wife Louise Rodrigues pitched a segment to the producers when they were in their 20s. It didn't turn into anything at the time, but Keoghan says two decades later, when he signed on to host Explorer, the location he and Rodrigues had pitched was on the call sheet — as a sheer happy coincidence.

Especially since the series is so close to his heart, Keoghan says it's not enough for him to show up and say lines and be a talking head host. On both The Amazing Race and Explorer, he researches, writes, and uses his producing skills alongside his hosting ones. If anything, he's even more involved on Explorer, because he's doing the exploring that's usually left to contestants on The Amazing Race. Speaking of which...

There are spectacular stunts, and this time Keoghan is doing some

The Amazing Race is known for the death-defying challenges its contestants compete in. The show has never met a zip line, sky dive, or bungee jump it didn't love. Explorer has plenty of that kind of stuff, and this time Keoghan's right in the thick of it. In the premiere episode, he descends into a Nicaraguan volcano known as the Mouth of Hell, which is quite a way for him to start his hosting run.

Over the course of the series, he'll also dive with whale sharks in Mexico, head into a hibernating bear's den in Maine, and help build a human tower in Spain (below, circled in blue), among other adventures.

No matter where he goes, Keoghan's not afraid to insert himself in the center of the action, which Explorer producer and National Geographic correspondent J.J. Kelley appreciates. "For Phil, it’s not fake. He’s a real adventurer. He’s done incredible adventures around the world," Kelley says. "[He's] authentic and real, and I always think that comes across to the viewer. If you bring in some pretty face or some recognizable name and they don’t fit, it doesn’t work. And Phil works."

You'll learn a ton of new things and be inspired to explore, too

Keoghan wants to make explorers out of all of us. It's why he was so excited to hear I was finally traveling beyond my country's borders. And even if you're unable to physically travel to the destinations on his shows, Keoghan has always made sure that the broadcast also brings the world to you. His famous line on The Amazing Race is, "The world is waiting for you." Though that show is mostly about competition, viewers learn a lot about new places along the way — including fascinating information about local culture, traditions, and customs.

"There’s this whole world out there that most people don’t know about. It’s not just waiting for those people that are about to go race, but it’s waiting for the audience," Keoghan says of his Amazing Race catchphrase. "There’s all these incredible things for us to discover about the world that’s just waiting out there for you. I love being a conduit for people sitting at home [to] then inspire them to want to go and search out new frontiers and to have a pioneering spirit."

That mentality is also evident in Explorer, as each episode is filled with smaller stories that traverse the globe. According to a NatGeo press release, 53 individual segments were filmed with an array of correspondents across 26 countries and 27 states. Where Amazing Race serves as a tantalizingly brief taste of the countries around us, Explorer gives viewers a deeper understanding of places around the world. And Keoghan hopes that learning about these stories will expand people's minds about their global neighbors.

So while you're waiting for The Amazing Race to return for Season 31, give Keoghan's Explorer a chance, too. It's proof that there is always something new to learn about our world. So go watch, learn, listen, and explore — the world is waiting for you.

More like this
What’s New On Netflix: Ana De Armas’ 'Blonde' & A Nick Kroll Special
By Arya Roshanian
What’s New On Netflix: Meet 'The Real Bling Ring'
By Arya Roshanian
15 Piping Hot Behind-The-Scenes Secrets From 'Great British Bake Off'
By Emily Dixon and Darshita Goyal
Every ‘RuPaul’s Secret Celebrity Drag Race’ Contestant’s Identity Has Been Revealed
By Brad Witter
Get Even More From Bustle — Sign Up For The Newsletter