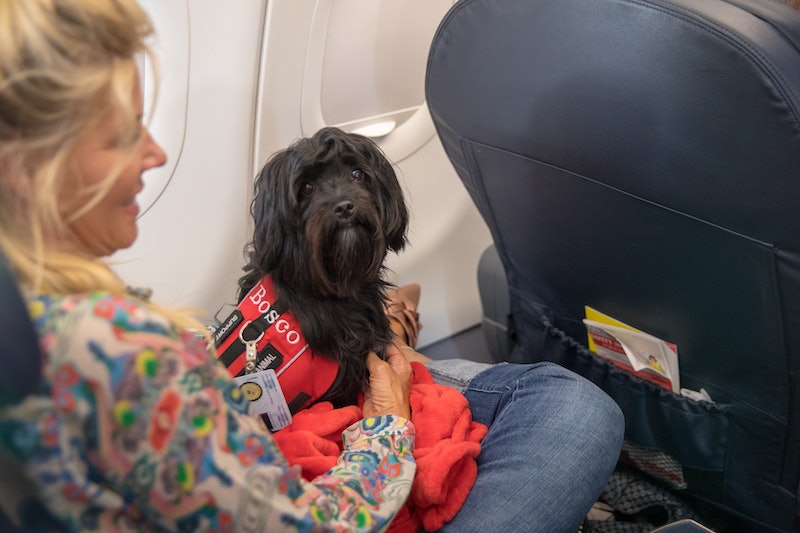 "Peacock barred from plane." "Miniature horse takes first flight." You may have spotted these kind of headlines more and more in recent years. But, although centred on animals big and small, these stories aren't anything to laugh about. They're all about on emotional support animals (ESAs): pets that help people with mental illnesses just by being there. Legally recognised in the U.S., ESAs have no such rights in the UK. And this lack of legal protection can have a big impact on people's lives.

It's easy to confuse ESAs with assistance or guide animals (usually dogs). But while the latter require specialist training to help people with disabilities and other medical conditions, ESAs don't have to undergo courses or assessments to be of use. Their mere presence is enough to assist. Plus, stories from across the pond have shown they can be from any domesticated species (an issue that's causing lawmakers some concern, per AP.)

"Emotional support animals can be a powerful part of a robust treatment plan for those suffering from anxiety, post-traumatic stress, depression, anxiety, bipolar disorder, and phobias," explains psychologist and psychotherapist Natasha Tiwari. Joe Nutkins, director of Dog Training for Essex & Suffolk adds: "Having an emotional assistance animal can help provide something positive to focus on, allow feelings of calm, and also offer some normality in strange situations."

In the U.S., there is no official way to register a pet as an ESA, per the New York Times. But airlines and landlords will generally accept a letter from a doctor or therapist confirming the need for a support animal. In the UK, however, there is zero guidance for ESAs. Assistance dogs, on the other hand, have official legal status. Under the Equality Act 2010, owners of these dogs are entitled to the same level of services by restaurants, shops, and the like. They cannot be barred from public places, and are allowed to fly in aircraft cabins.

56-year-old Tess trained Kratu as an assistance dog to help with her autism and mental health. ("He is six now, and [training is] always ongoing," she says.) Under the Equality Act, his assistance dog status means he can accompany her in public places, unlike dogs under the emotional support title.

"Kratu succeeds where the system fails me," she explains. "Where I was isolated, lost, and lonely, he has brought companionship. Motivation to look after him and his welfare makes me face my issues and get through them as his wellbeing is vital to me."

One of the most important abilities Kratu has is the specific tasks that he's trained in to support Tess. He assists with the likes of anxiety in crowds and with communication. "I am often misunderstood and offend many," Tess says. "Kratu reads me, and is there by my side."

A campaign is underway to give ESA owners the same support. In the UK, ESAs are not entitled to enter indoor public spaces or to fly in the cabin with their owners. (Some non-UK airlines allow this at their discretion, notes the BBC.)

But it's not just travel and social occasions that can be affected. Housing, too, can be a big problem, explains Emotional Support Animals UK. Renters often find a "no pets" clause in their tenancy agreement, meaning only registered assistance dogs will be allowed. Little legal protection exists to help ESA owners fight back.

"Fundamentally, the fact ESAs are not currently legally recognised is a reflection of the fact that mental illness is still not given the same weight as physical illness in the eyes of the law," Tiwari says. "For those suffering with anxieties and fighting an internal war in their minds, the sense of emotional support, love, and safety that an ESA can provide is exactly the same as an assistance dog will do for someone who is physically challenged."

The grass is slightly greener on the other side, but not entirely so. U.S. law has allowed both emotional support and service animals to fly for free since 1986, reports the Guardian. The country's Fair Housing Act also forces landlords to make "reasonable accommodation" for ESAs. But, per the Guardian, emotional support pets aren't entitled to access all U.S. public spaces.

ESA supporters tend to look to the U.S. as a shining example but increasing ESA declarations and the arrival of pigs and peacocks in airports has led to fears that people are trying to scam the system. After United Airlines reported a 75% rise in support pet requests, per the BBC, it banned all animals — except dogs, cats, and trained miniature horses — from travelling in cabins.

Similarly, reports the Guardian, a new U.S. government proposal would allow only trained dogs to be registered as service animals on flights, stopping people listing regular pets as ESAs in order to cut travel costs.

A different type of scam has cropped up in the UK, according to Emotional Support Animals UK. Instead of affecting businesses, these schemes hurt owners by advertising paid ESA registers that are not legally recognised. Owners receive ESA cards, believing these will allow them to take their pet wherever they please. Sadly, this is not the case.

A petition for ESA legal recognition in the UK has received over 16,000 signatures. But, thanks to the aforementioned U.S. government proposal and a series of state laws aiming to reduce ESA fraud, per the New York Times, it's possible the UK government could see more drawbacks than benefits. "We don’t have any plans to introduce emotional support animals as an alternative therapy, or for them to be legally recognised," the Department of Health and Social Care tells Bustle.

Tess knows all too well the benefits of canine company, and thinks "emotional support dogs should be available." "Sadly," she adds, "there is a lot of conflict in the assistance dog world. If the charities could work with each other and support each other, then maybe this is something that [could] become possible."

Experts think there's an easy way to alleviate ESA concerns. Strict guidelines stating which animals can be certified and who is entitled to have one would help. (In the U.S., for example, owners can receive an ESA letter from a medical professional online, rather than having a face-to-face appointment, states the Guardian. Critics argue this doesn't constitute a proper assessment.)

And "ensuring the ESA is under control to keep themselves and everyone else safe is just as important as being able to bring the ESA in the first place," states Nutkins, who advises that all support animals undergo training. This is especially pertinent after reports of untrained ESAs biting people and relieving themselves in public spaces, per AP.

Training "doesn't need to be costly or time-consuming," Nutkins adds. Recommended teachings include only sitting on a sofa when invited, learning how to stand and lean on their owner to give comfort, and fetching the likes of tissues.

Courses to train a dog as an emotional support animal already exist in the U.S., Nutkins points out. (A miniature horse was also recently trained, per the Independent, but other species may not respond so well.) So, when it comes to our canine friends specifically, Nutkins sees "no reason why [ESA assessments] cannot be continued here."