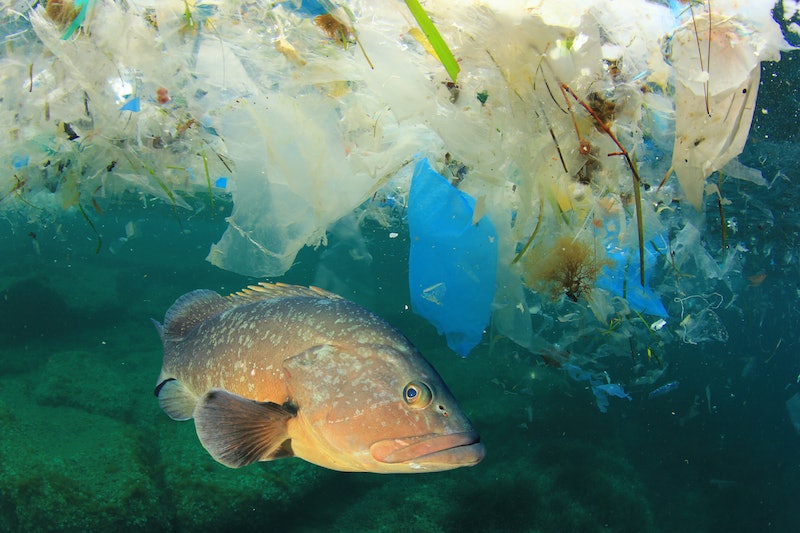 They may be incredibly small, but they can affect the environment — and possibly humans — in a pretty enormous way. Microplastics, according to the National Oceanic and Atmospheric Administration (NOAA), are tiny pieces of plastic less than five millimeters long. Though further research needs to be done to realize their full impact, the general consensus is that microplastics are real bad news in more ways than one.

As NOAA noted, microplastics come from many different sources, and occur when large pieces of plastic break down into much smaller pieces. Moreover, they can also be present as microbeads (for exfoliating purposes) in a variety of health care and beauty products, NOAA said. Notably, microbeads are banned to varying degrees in several countries because of their negative environmental impact, the New York Times reported. The paper also added that microplastics are found in many other products like tires, chewing gum, cleaning supplies, and clothing.

As CNN described, there are a variety of problems associated with microplastics, some of which scientists are just beginning to understand. Lots of microplastics end up in global water systems after people wash their clothes or rinse off hygiene products that contain microplastics, according to the outlet. And once microplastics are in bodies of water, aquatic animals sometimes mistake them for food — which can have dire consequences.

In fact, Dr. Peter S. Ross, Ph.D., the vice president of research at Ocean Wise, a marine conservation organization, tells Bustle that "Ocean Wise scientists have conducted research that shows microplastics can be found in our oceans from pole to pole, and that tiny crustaceans called zooplankton are mistaking them for food." Ross stresses that "zooplankton form the base of the ocean food chain, so their health is fundamental to a productive ocean and our ocean food supply. Microplastics can be carried up the food chain to other animals that eat zooplankton."

Nicholas Mallos, the senior director of Ocean Conservancy’s Trash Free Seas program, shares similar thoughts with Bustle, noting that "Microplastics make plastic accessible to the entire food chain, starting with the tiniest zooplankton to the largest whale." Mallos adds that " ... while scientists are still piecing together what that means for ocean and human health, studies show that plastic can impact reproduction and feeding behavior in fish and transport toxic chemicals, among other effects ..."

In May 2019, National Geographic reported that scientists have documented digestive tract blockages and altered feeding behaviors in fish that consume microplastics. The outlet noted that these behavioral changes can decrease a fish's ability to grow and reproduce, threatening the health and maybe even survival of that species. This, in turn, can affect the health of many other ocean species, because of the interconnectedness of the marine food chain. In fact, the outlet said, if smaller fish reproduce at a lower rate because of microplastic consumption, fewer large fish will exist — and the makeup of the world's oceans could start to look very different.

Moreover, there's also concern that microplastics could be harmful to humans who consume seafood — something which scientists are just beginning to investigate, National Geographic noted. Indeed, a 2018 study published in Current Environmental Health Reports indicated that "microplastics [ingested by humans] may cause harm to humans via both physical and chemical pathways" and stressed that it's imperative to do more research into the effects of microplastics on human health. "We know that humans ingest microplastics," the study asserted. " ... The toxicity associated with consuming microplastics is likely dependent on size, associated chemicals, and dose."

That being said, the World Health Organization (WHO) recently released an assessment concluding there's no evidence that microplastics in drinking water can hurt humans, The Guardian reported. “Based on the limited evidence available, chemicals and microbial pathogens associated with microplastics in drinking water pose a low concern for human health," the assessment stated. However, it stressed that more research is needed, regardless of the findings.

Beyond consumption, an August 2019 study about microplastics' presence in the Arctic (including in snow), has raised concern that microplastics have also polluted the Earth's air, in addition to its waterways, the Los Angeles Times reported. As CNN highlighted, these new findings raise additional concerns about how microplastic air pollution could threaten human health.

Overall, microplastics are already profoundly impacting marine life — and they may have consequences for human health as well. As scientists continue to examine the effects of microplastics in humans, we'll get a clearer picture. For now, it looks like we're just scratching the surface.

More like this
Kate Middleton & Prince William Were Booed & Mocked On Their U.S. Visit
By Jake Viswanath
All The Most Stylish Winter Wardrobe Staples You Can Buy On Walmart.com
By Jessie Quinn
Here’s How To Make The TikTok-Viral Sushi Bake
By Alexis Morillo
December's Full Moon Is Bringing Extra Drama For These 3 Zodiac Signs
By Nina Kahn
Get Even More From Bustle — Sign Up For The Newsletter