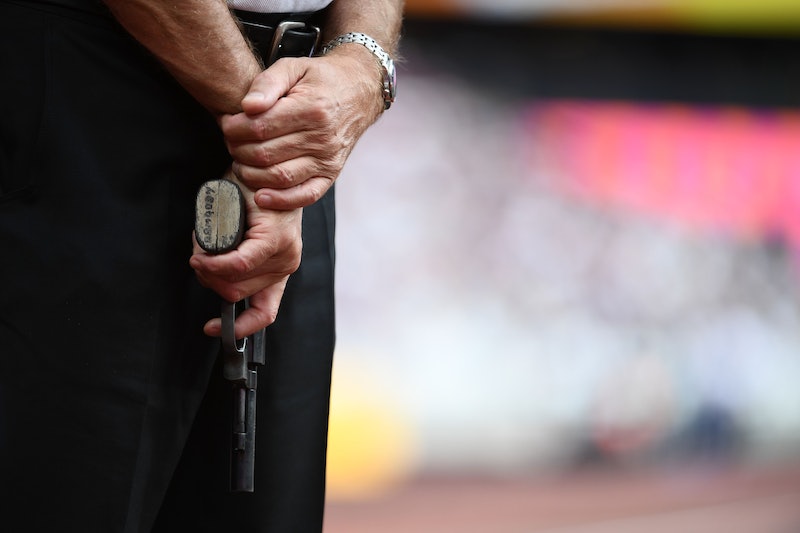 We often think of millennials as being more liberal than older generations, usually based on their voting patterns. But when it comes to individual issues, millennials can't all be painted with a uniformly left-wing brush. One such issue is gun control. In October 2015, a Gallup poll found that, while 57 percent of 30-49 year olds and 56 percent of 50-64 year olds support stricter gun laws, gun control was only supported by 50 percent of people aged 18-29. (Millennials, in case you forgot, are technically people 35 and younger.) It's a mistake to think that all pro-gun or anti-regulation millennials are men; millennial women are buying and using guns, too. Bustle talked to a few of them to figure out why.

The amount of women with guns in general is substantive enough for there to be a big industry in "concealed-carry" female accessories. Pew Research data from 2017 reveals that 22 percent of American women own guns, but that they tend to buy them later in life; the average age of first gun ownership for women is age 27, compared to an average age of 19 for men. While that's a distinctly different life stage, it's still well within the millennial age range. So why do some of the women in a young, relatively liberal generation feel invested in the idea of gun ownership?

The National Rifle Association has been looking to a new generation of young women to boost gun ownership, as a $6.5 million ad campaign in 2016 targeted at millennial women demonstrated. But manufacturers have also increasingly geared advertising toward women, marketing special firearms models with smaller frames, custom colors (pink is a favorite), and accessories like the “concealed carry” leather handbag in “salmon kiss” offered by Cobra Firearms, or the leopard shooting gloves and Bullet Rosette jewelry sold by Sweet Shot (“Look cute while you shoot!” is the company’s motto).

Millennial women interviewed by Bustle tended to have grown up with guns. "I've grown up shooting firearms both recreationally and for hunting, my entire life," Taylor Giardina, who currents resides in Texas, tells Bustle. "My family always did this together as a family activity, and I was taught a lot about gun safety and ownership rights at a young age."

Shea Drake from Salt Lake City tells Bustle, "I grew up in a hunting family, and while I haven't gone hunting in about 10 years, I still target shoot fairly regularly." But it's not just about culture; it's about security.

Drake, who owns three guns (a .22 pistol, a .22 rifle, and a 20 gauge shotgun), says, "I am lucky that, so far, I haven't had to use my guns for self-defense. But, I am glad that I know what to do if such a situation were to arise thanks to regular target practice. There is a sense of security in having a gun in my home, and knowing how to use it."

That feeling of empowerment was echoed by Giardina. "Though I have not had to use [a gun] for self defense, I am happy to know I have one," she says. "When I moved out on my own in college, I never worried about lack of a security system because I know how to use a firearm. It was a very empowering experience to know I can protect myself."

Statistics about gun violence against women in particular can go both ways in arguments about gun control. The revelation in July that guns are used in over half of all homicides of women in the United States, according to the Center of Disease Control & Prevention, has encouraged gun advocates to argue for women arming themselves — but like other statistics of its kind, it's also used by gun-control activists to point out that guns in American homes are often used against women, not to protect them. Violence against women using firearms is particularly notable when it comes to intimate partner violence. People with a history of domestic violence are five times more likely to commit murder when a firearm is present in the house, while a gun's presence in a domestic violence situation raises the woman's likelihood of murder by 500 percent, according to research from the American Journal of Public Health in 2003.

A lot of women's gun ownership across the United States is based around defense, if the Pew research is to be believed. 27 percent of women say defense is the only reason they own a gun at all, rather than for sport-shooting or target training. Nearly a quarter of Americans who own only handguns are women in urban areas. Founder of the She Can Shoot shooting league Tina Wilson-Cohen told the New York Times in 2013 that 90 percent of the women who joined the organization were motivated by the fact that “they’ve been a victim at one point of their life, of stalking or date rape or domestic violence, or they have just felt so vulnerable, and they want to feel competent and like they can protect themselves.”

However, self-defense is more complicated than it seems; a report from the Violence Policy Center in 2016 found that women defending themselves from sexual assault using a gun is so rarely reported it's basically non-existent, and that only 15 women used a firearm to kill a man in self-defense in 2014. But for Shea and Taylor, the possibility of aid in a difficult situation is worth the risks.

It's also a mark of empowerment. Stereotypes about guns being "unfeminine" crop up across the United States, and both Giardina and Drake enjoy flouting them. "Some people only think that old men, or rednecks enjoy firearms, and see no reason for a young woman to carry one," Giardina tells Bustle. "I've taken many girlfriends shooting and they have really enjoyed it." Drake adds that she's heard that "women are worse at shooting than men," noting that "men tend to jerk their finger on the trigger, pulling the aim off. Women, on the other, tend to be more cautious and slowly squeeze the trigger instead, which doesn't pull as much." It's perhaps no accident that the most successful female Olympic shooter, Kim Rhode, is an American, or that the first gold medal awarded at the 2016 Rio Olympics went to Virginia Thrasher (who is, you guessed it, from Virginia) for the 10m Air Rifle.

Millennial gun ownership is lower than other age groups. A Pew study in 2014 found that only 26 percent of people in the 18-26 age bracket own guns. One reason for this, it seems, is expense: guns aren't cheap, and neither is ammunition. But women make up a larger proportion of that number than you might think, and our perceptions of gun ownership as largely old and male seem to be based on outmoded ideas. People believe that "women are clueless about guns", Drake tells Bustle. "Guys always seem surprised that I don't need help loading my guns. People assume my husband got me into guns, when it's actually the other way around." In a world in which incidents of violence against women make headlines every day, it's perhaps unsurprising that millennial women are reaching for something that will help them feel a little more protected.

More like this
Beyoncé & Madonna’s “Break My Soul” Remix Honors A Group Of Black Icons
By Stephanie Topacio Long
Your Daily Horoscope For August 15, 2022
By Mecca Woods
25 Things I've Reduced My Life To, In Addition To WFH In My PJs
By Ginny Hogan
The Spiritual Meaning Of The August 2022 New Moon
By Nina Kahn
Get Even More From Bustle — Sign Up For The Newsletter