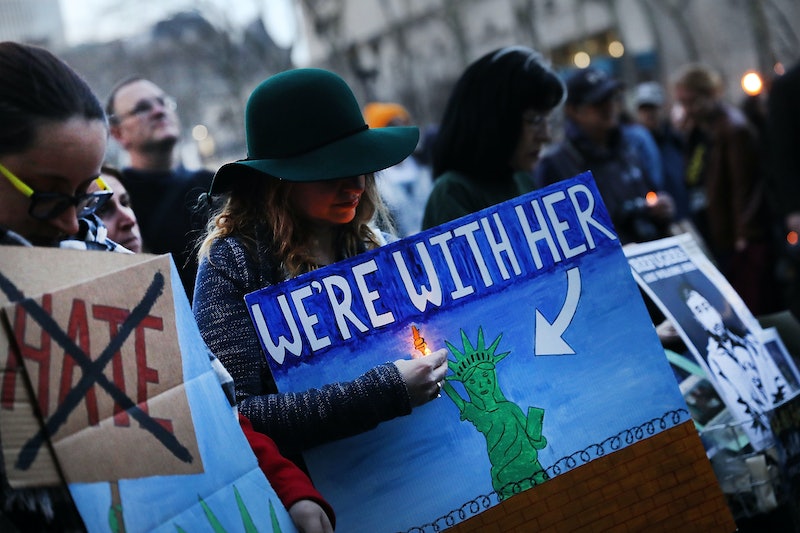 If President Trump thought he would get a break from news about protests just because the weekend's over, then he'll be disappointed to read the news on May 1. If you haven't heard why people are protesting on May 1, don't be ashamed. These protests aren't expected to be quite as big as some of the other ones that the Trump administration has witnessed in its short span — but you can help change that. The May Day protests will broadly call for immigrants' rights and other civil rights, fighting against the anti-immigrant atmosphere that Trump has created in his first few months in office.

These protests will be a repurposing of May 1, or May Day, which has played the role of Labor Day in many countries across the globe for over 100 years. Otherwise known as International Workers' Day, it has also been called "Loyalty Day" in the United States as a reaction to the communist countries claiming International Workers' Day as their own. Trump, like many presidents before him, released a statement about the day, asking Americans to "honor the United States of America and those who uphold its values." The loose coalition of groups organizing the May 1 protests is certainly doing that — even if they likely see American values a little bit differently than Trump does in his Loyalty Day statement.

The organizers of the protests haven't defined them specifically as protests for immigrant rights, although that will be a core feature of many of them. They're also in support of all the communities who have felt threatened or marginalized by the new administration — or, in other words, they're promoting an "inclusive society." The Shut It Down May 1 website explains the movement's mission.

We will defend our communities until immigrant families do not fear the violence of deportation, until every child gets a good public education, every family has quality healthcare and childcare, and every senior can retire in dignity. We will advance justice until every woman and girl is safe, until Black people can walk down the street without fear of police terror, and until working full-time is enough for a family to live out of poverty.

They're encouraging people not to go to work on that day, in another iteration of the Day Without An Immigrant protests — and many employers across the country have been supportive of the idea. If you can't take the day off, there are other ways to show your support, even if it's just by spreading the word to someone who might be able to go to one of the many protests or go on strike themselves.

Like the society that these protests are fighting for, you can show up with whatever goal you want and whatever cause that you'd like to support. The important thing is just that you participate in whatever way you can.