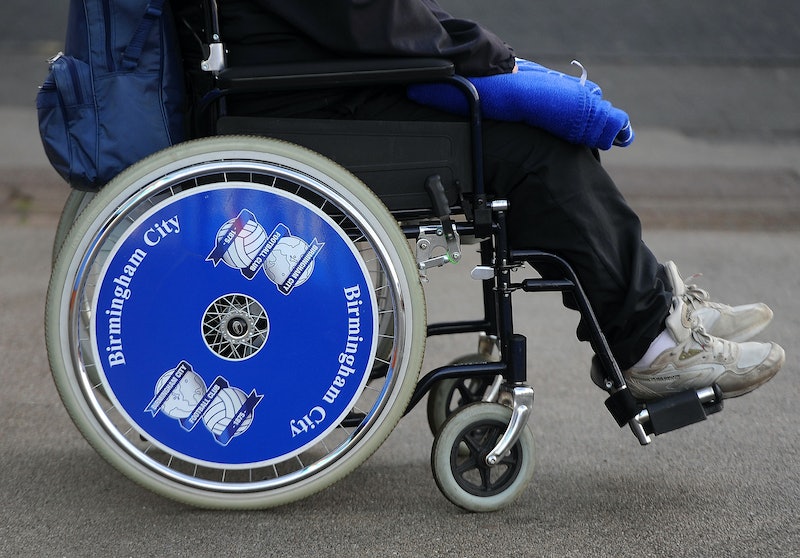 Like reproductive health care access, the environment, and immigrants' rights, disability protections are at risk under the Trump administration. Almost 27 years after the Americans with Disabilities Act (ADA) was signed into law by former President George H.W. Bush, a new law has been proposed that threatens to limit the protections provided by the ADA.

Under the ADA, a person with a disability currently has two choices if they encounter a barrier to accessibility at a business. They can file a complaint with the U.S. Department of Justice, or they can file a lawsuit in court. If they choose to follow the DOJ path, the DOJ would investigate the potential ADA violation and possibly pursue mediation procedures with the business and the person making the complaint until a low-cost solution is found. In either case, the ADA makes it much more likely that barriers to accessibility are quickly resolved.

The ADA Education and Reform Act of 2017 — also known as H.R. 620 — would change that, according to Rewire's Robyn Powell. According to the text of the proposed act — which was introduced back in January by the GOP — a person with a disability would have to provide a business owner with a written notice if they encountered a barrier to accessibility. This notice would have to be "specific enough to identify the barrier." After that, the business owner has up to 180 days to resolve the problem: 60 to acknowledge that the problem even exists, and a further 120 to progress toward its resolution.

Whereas the ADA tries to ensure that violations are quickly corrected through efficient and low-cost methods, H.R. 620 would make people with disabilities wait much longer just to have their rights respected. In response to the proposed act, the Consortium for Citizens with Disabilities and its allies wrote and signed a letter to members of the House Judiciary Committee, urging them to think carefully before passing legislation that would restrict people's rights. The following excerpt from the letter makes it clear how H.R. 620 would threaten the access rights of people with disabilities:

H.R. 620 would create significant obstacles for people with disabilities to enforce their rights under Title III of the Americans with Disabilities Act (ADA) to access public accommodations, and would impede their ability to engage in daily activities and participate in the mainstream of society. Rather, the burden of protecting the right to access a public place is shifted to the person with the disability, who first has to be denied access; then must determine that violations of the law have occurred; then must provide the business with specific notice of which provisions of the law were violated and when; and finally, the aggrieved person with the disability must afford the business a lengthy period to correct the problem.

H.R. 620 — which has 18 co-sponsors, according to Powell — is currently sitting in the House Judiciary Committee. If this bill is successfully passed, it would essentially transfer the burden of correcting accessibility violations from businesses to people with disabilities.

H.R. 620 is not the only threat to disability protections under the current administration. Donald Trump's proposed budget would cut $72 billion from two major disability protection programs, Social Security Disability Insurance and Supplemental Security Income, over the next 10 years. If Trump's budget is passed, the nearly 9 million workers with disabilities who currently rely on SSDI would be at risk of losing crucial protections.

The Trump administration is skilled in the art of distraction, with the most recent one being the "covfefe" debacle. But when millions of people find their civil rights at risk, it is important to stay focused on what really matters.