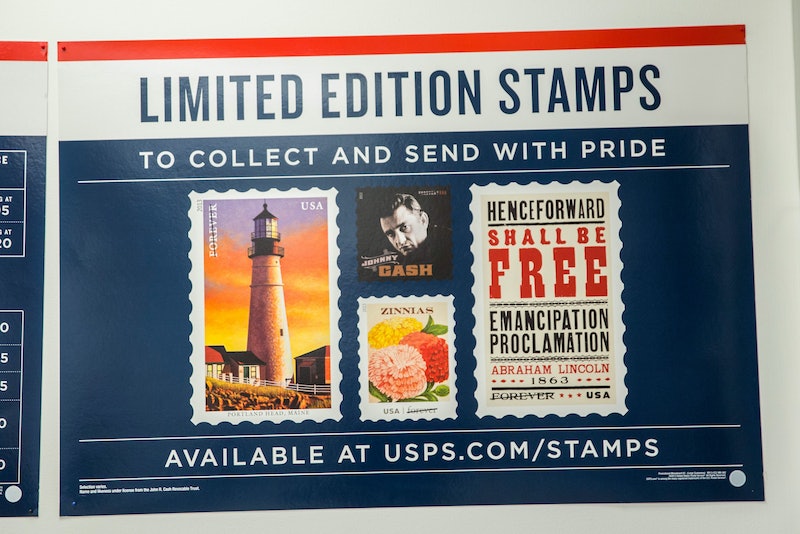 On Sunday, the United States Postal Service announced the largest price increase for stamps since 1991, according to The Hill. But why are stamp prices going up now, and which stamps does it effect?

The Hill reported that during the 2018 fiscal year, USPS had a net loss of $3.9 billion. "The Governors believe these new rates will keep the Postal Service competitive while providing the agency with needed revenue," USPS wrote in a statement when the proposed price increase was first announced in October. "The Postal Service receives no tax dollars for operating expenses and relies on the sale of postage, products, and services to fund its operations."

Priority Mail flat rate mail — those iconic red, white, and blue boxes and envelopes — will also increase by 5.9 percent, according to USA Today. For example, a small flat rate box will now cost $7.90 as opposed to $7.20, according to a list from USPS.

The "forever" stamps were initially introduced in 2007 for 41 cents, according to ForeverStampValue.com, a website that tracks the prices of these stamps. The stamp's price has increased by 1 to 5 cents regularly since then, according to the site. NBC News reported on Sunday that previous "forever" stamps will still be valid for mailing purpose, despite the price increase.

Despite the 10 percent increase in package deliveries in 2018, USPS still lost roughly $4 billion, according to Reuters. In 2017, the loss USPS reported was $1.2 billion, the wire service reported. Reuters attributed the losses to "rising pay and benefits and higher transport costs." USA Today reported that this is the 12th consecutive year USPS recorded a loss.

Postmaster General Megan Brennan told Reuters in November that USPS has limited options as the agency's rates are set by the Postal Regulatory Commission, not the agency itself — or even Congress. "The flawed business model imposed by law continues to be the root cause of our financial instability," Brennan told Reuters.

The price change is important to remember if you're labeling your packages or letter at home, according to USPS officials. "If you come to the post office, we'll weigh it and put the correct postage on. If you're at home, that could create a problem if you don't have enough postage on there," said USPS San Diego District spokesperson Eva Jackson told NBC Bay Area.

Brennan, the postmaster general, said the agency's mission remains the same: Get your mail to you in an efficient manner. "We will take all appropriate actions within our control to ensure that we can continue to fulfill our primary mission to provide prompt, reliable and efficient service to American businesses and consumers in all communities in our country," Brennan said in a statement to USA Today in early January.