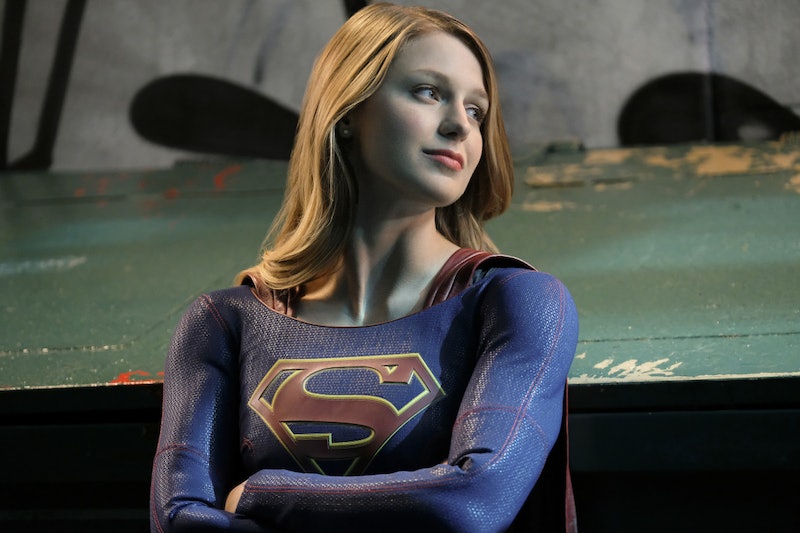 Well, that's not how I expected Kal-El to return to Supergirl, especially in the middle of an alien invasion. Something is happening between the Krypton family in the May 15 episode. Why are Superman and Kara fighting on Supergirl? Turns out that Rhea was holding one heck of a trump card, and the cousins are in for an unexpected showdown in the upcoming Season 2 finale.

Superman was missing for most of the episode. Kara wouldn't regularly call on Kal-El, but the Daxamite siege required all hands on deck. So it's unfortunate that when that superpowered hand did show up, it's slapping Kara to the ground. What's going on? What did Rhea do to him? Is she threatening him, the way she threatened Lena Luthor with the children's hospital in the episode, or working some kind of alien power of suggestion? You'd think she would have used brainwashing powers earlier and on, oh, everyone if she had them. Is that really Superman to begin with? Maybe it's a shapeshifter. I'm not sure that I will entertain the thought that Clark Kent turned evil on his own.

The details will matter later. Contriving face-offs between superheroes who don't necessarily need to face off is the stuff that comic books thrive on. Even if Clark and Kara are family and love each other, I'm not against seeing them punch each other a bit.

So maybe Rhea didn't get to marry her son off to Lena Luthor. She still seems pretty in control of the situation. I'm pleased that "producing an heir" on Daxam just means clipping locks of hair and using test tubes. We won't have to worry about a pregnant Lena storyline in Season 3 — someone has read (or watched) The Handmaid's Tale.

Even if he's on the wrong side of the fight for whatever reason, it'll be good to see Superman in the Supergirl finale. Hopefully he'll snap out of it in time to meet Lena and Mon-El. I'd be interested to see how he gets along with Kara's newest companions. That might be the real conflict, let's be real.