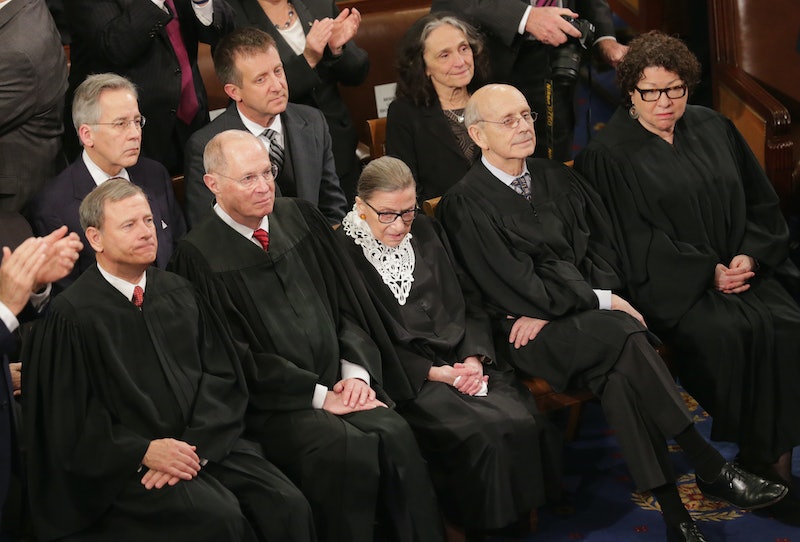 After several months of controversy and multiple weeks of delay, Brett Kavanaugh's Supreme Court nomination could be decided as early as Saturday. If the judge is confirmed, he will be the fifth staunch conservative on the bench, which could shore up several decades of conservative legislature. If you're wondering why there are nine Supreme Court justices, as opposed to an even number, the answer isn't necessarily rooted in reason.

Of course, it helps to have an odd number of justices, ensuring that there's never a dead tie in a legal debate. But the nine seats on the Supreme Court bench aren't exactly a staple of traditional American legal policy. In fact, there is nothing in the Constitution that stipulates how many justices should be on the Supreme Court.

Originally, George Washington personally appointed six justices to the court. Because the number was even, votes had to be made by a 4-2 margin in order to be settled as law. Over the next 200 years, the number of justices varied from six to 10. The current number of nine justices was set by the Judiciary Act of 1869. But it's just that: a legal act, which could be overturned or amended by Congress.

In the last few weeks, anti-Kavanaugh protesters have traveled to D.C. in droves, in the hopes of convincing U.S. senators to vote against Kavanaugh. But others have begun to talk about what types of strategies should be pursued if Kavanaugh does receive the appointment. One of those strategies is focusing on flipping partisan control to the Democrats in order to "pack the court."

"Packing the court" would mean changing the number of justices that sit on the Supreme Court at any given time. So if Democrats took control after midterms, instead of waiting for a justice to retire, Congress could simply pass a new act mandating 11 (or 13, or 15, and so on) justices on the bench, rather than nine.

This might sound kind of revolutionary, mostly because of the stigma around the Supreme Court as an institution that is above partisan politics, not to mention the notion of justices having life terms on the bench. But the number of Supreme Court justices isn't a foundational American tenet, like termed presidencies. It's just a law — and more and more, intellectuals and thought leaders are raising the idea of packing the courts as the only solution to ensuring the continuation of progressive legislation in coming years.

Indiana Law professor and podcaster Ian Samuel tweeted, "'Pack the courts' should be a phrase on par with 'abolish ICE.'"

Jonathan Turley, a legal scholar and Professor of Law at the George Washington University Law School, argued in the Guardian, "I believe a 19-member court would be ideal – roughly the average size of a circuit court ... This would allow a broader range of diversity and more consistent opportunity for each president to add members to the court."

Mehdi Hassan, a British political journalist, suggested in a piece for the Intercept that Democrats not only pack the court, but use it as an opportunity to create more accurate representation within the court by prioritizing women, particularly those of color. Hassan was quick to point out that though this would be a political strategy, Supreme Court nominations are inherently (and always have been) political strategies.

There's significant precedent in American history for the changing of the number of Supreme Court justices as a means for a political end. But that doesn't necessarily mean it's always wrong. After all, Abraham Lincoln added a 10th Supreme Court justice in order to ensure the abolition of slavery.