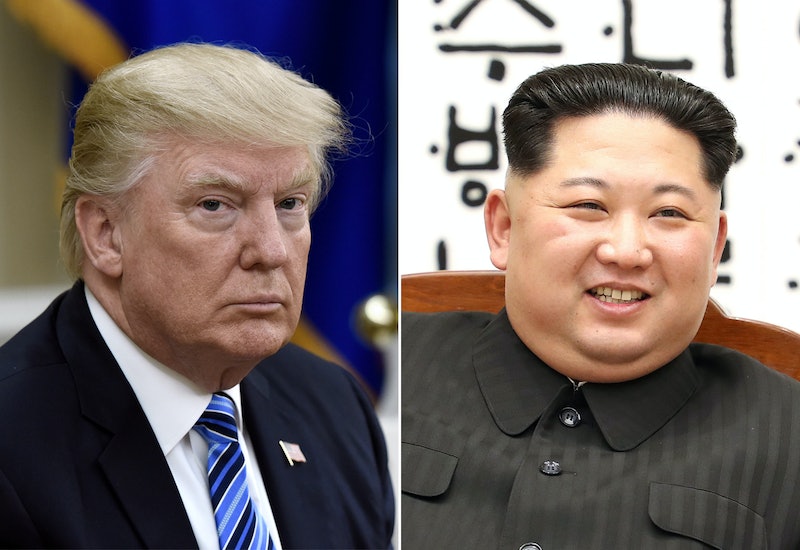 In an announcement Thursday morning, President Donald Trump revealed the date and location of his meeting with Kim Jong Un. The meeting between the U.S. president and North Korea's leader will take place on June 12 in Singapore, but if you're wondering why Trump and Kim Jong Un are meeting in Singapore, there are actually a few reasons.

Trump shared the news via his go-to medium of Twitter. The president wrote, "The highly anticipated meeting between Kim Jong Un and myself will take place in Singapore on June 12th. We will both try to make it a very special moment for World Peace!"

According to CNN, the choice of Singapore to host the historic meeting stems from a few of its defining traits. While Trump had publicly mentioned the demilitarized zone separating North and South Korea as a potential location, U.S. officials generally preferred Singapore for its distance from the heavily state-controlled North Korea. Singapore is also an independent city-state that has much more liberal and capitalist economic policies than many of its neighboring countries. The Independent also reports that Singapore provides a more neutral location, something both sides would ostensibly value.

But Singapore does appear to offer some benefits specific to Trump. James Poulos argued at The Orange County Register that Singapore is "firmly in America's camp." nation has traditionally been an ally of the United States, and allows the United States to operate out of the Sembawang Naval Base.

North Korea may like the fact that, as Kaitlan Collins and Kevin Liptak reported at CNN, Singapore is one of just 47 countries that hosts a North Korean embassy.

Announcement of the summit comes on the heels of the release of three Americans held as prisoners in North Korea. Kim Dong-chul, Tony Kim, and Kim Hak-song were greeted by President Trump himself early Thursday morning when their plane landed in Maryland. The New York Times' Katie Rogers noted that the secured freedom for the three Americans removes a "difficult obstacle" to the upcoming June summit between Trump and Kim.

The administration's goal has been a complete denuclearization of North Korea. Josh Rogin reported last April for The Washington Post that Trump was not interested in "simply a halt or freeze of some of North Korea’s tests or other illegal activities." To that end, the Trump administration has implemented its "maximum pressure campaign" to diplomatically push North Korea toward ending its nuclear ambitions.

Former Secretary of State Condoleezza Rice also issued a warning about previous attempts to negotiate with North Korea. She told Bloomberg, "The North Koreans have a history of, when they're under sanctions and they start to bite, coming to the table, making promises, and then not carrying through with them. So beware."

It's a possibility Trump seems to be aware of himself. The president on Wednesday repeated twice that "everything can be scuttled." But he voiced cautious optimism on Thursday. The New York Times reports Trump said of the three Americans' release, "We’re starting off on a new footing. ... I really think we have a very good chance of doing something very meaningful.”

With the meeting between Trump and Kim set for June 12, whether or not "something very meaningful" can indeed be achieved will likely become more clear in coming weeks.