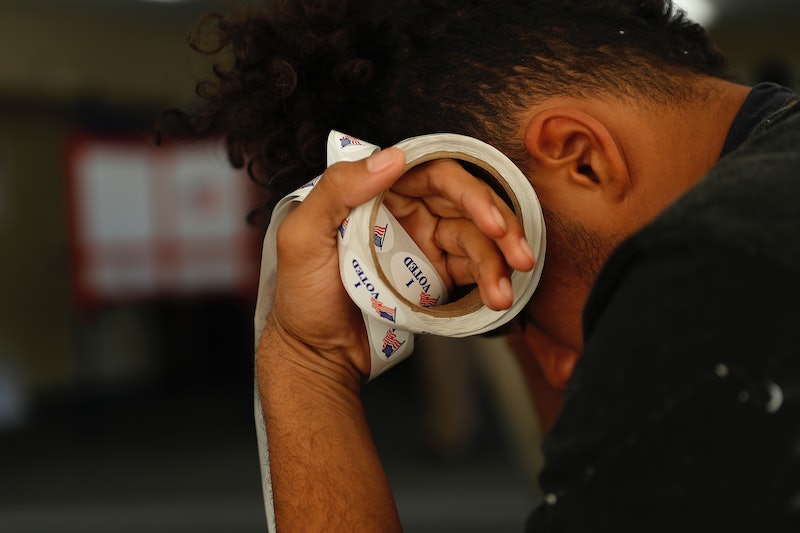 As just about everyone in America knows, presidential elections can really drag on. Candidates often announce their campaigns well over a year before election day, there are multiple primary debates the year preceding an election, and speculation over who has a shot at winning begins even earlier. This begs the question of exactly why U.S. presidential elections are so long, and according to elections experts, there are several answers to that question.

According to Chapman Rackaway, chair of the Political Science Department at the University of West Georgia, one of the biggest is that America, unlike parliamentary democracies, holds popular primary elections to determine its candidates. Primaries account for the majority of time during any given campaign cycle, and are one of the biggest culprits in stretching out U.S. elections.

"If you look at where we're at in the presidential election for 2020, we'll only have a four- or five-month general election," Rackaway tells Bustle. "But we'll have nearly a year and a half of this pre-primary and primary phase of the election."

Primaries are a relatively recent invention. The U.S. Constitution says nothing about them (or political parties at all, for that matter), and according to Vox, the first presidential primary wasn't even held until 1910. Early primaries weren't even binding, meaning they were essentially opinion polls that had no direct effect on the actual nomination process. But Democrats instituted a series of reforms in 1972 that required delegates to vote in accordance with the results of their state's primary elections for the first time. The Republican Party soon followed suit, and the modern primary was born.

"Primaries have done more to elongate the cycle than anything," Rackaway says. "And the reforms that Democrats thought would make elections better in 1972 — making primaries binding on their delegates to the national convention — also helped elongate the cycle."

Another huge factor in the length of American campaigns is the fact that America holds its general elections on a fixed, unchanging date: Every four years, on the first Tuesday after the first Monday in November. This means that everybody knows several years ahead of time when an election will be held, giving candidates a theoretically unlimited time to campaign.

"The terms for federal office are set in the U.S. Constitution," Ciara Torres-Spelliscy, a law professor at Stetson University and fellow at the Brennan Center for Justice, tells Bustle. "Even if a lot of people would love for there to be a presidential election this year, instead of next year, tough luck — it's Constitutionally-mandated. We're not a parliamentary system, so we can't declare snap elections the way you can in Canada, or the U.K."

Rackaway notes that in parliamentary systems, snap elections tend to be held "fairly quickly — between five and 12 weeks" after they're called. This creates brief, sudden election cycles. But because Americans "always know when our election days are coming, we have this thing where the elections tend to stretch out to reflect that," Rackaway explains.

In a more general sense, Rackaway cites the lack of voter engagement in politics as a driving factor in the length of elections, arguing that protracted campaigns are necessary to sustain voters' attention.

"Our population just doesn't pay a lot of attention to politics," Rackaway says. "So you have to be very aggressive, as a campaigner, and sustain that aggressive outreach to get people to pay attention and engage in an election."

But America's protracted elections may be having a negative effect on general voter engagement: A Pew Research study found that in July 2016 — when the two parties were just beginning to formally nominate their presidential candidates — 59% of voters already had election fatigue.

It's possible that in the future, Americans will become more engaged in politics, which could reduce the pressure on politicians to extend their campaigning for as long as possible. But primary elections and fixed general election dates almost certainly aren't going anywhere — which means that, in all likelihood, American presidential elections won't be getting any shorter any time soon.