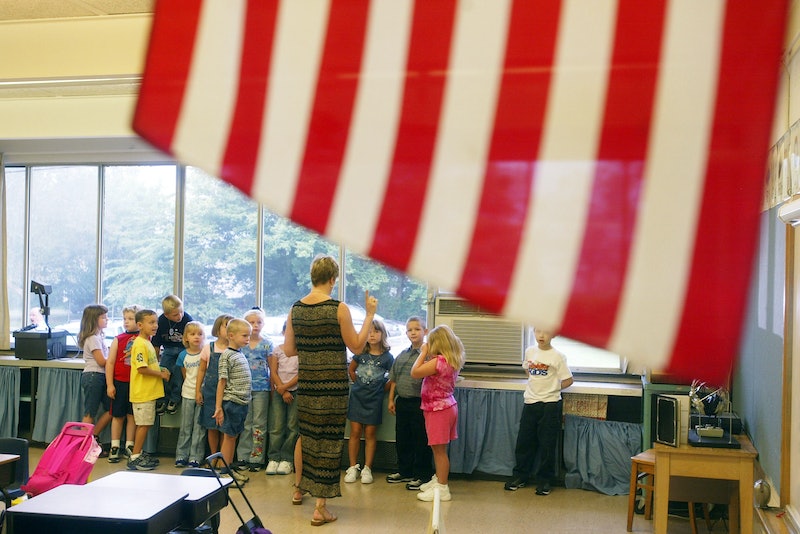 Public schools across an entire state have been closed for four days, because teachers are on strike in West Virginia. Republican Gov. Jim Justice signed legislation last week that gives West Virginia teachers a small raise, but educators in the state didn't think it was enough. Demonstrations began at the state capitol building on Thursday, and they grew into a massive picket line in Charleston, as well as individual rallies outside schools across the state.

The new legislation gave West Virginia teachers a 2 percent raise that will take effect in July, followed by 1 percent raises for the next two years. "We need to keep our kids and teachers in the classroom," Justice said in a statement after signing the bill into law. "We certainly recognize our teachers are underpaid and this is a step in the right direction to addressing their pay issue."

However, teachers' other concerns — including problems with their insurance program and the high cost of health care — weren't addressed in the legislation. The employee insurance program that West Virginia teachers use covers all public employees in the state, but teachers on strike told CNN they're fed up with what they say is inadequate coverage.

Justice said on Monday that there's "no humanly way" to fix this problem in a regular legislative session. But he promised to call a special session surrounding a natural gas tax that will potentially bolster funds for the public employee insurance program.

In a statement issued Wednesday, the American Federation of Teachers-West Virginia said more work was being done to address teachers' insurance since they announced the strike, but added, "We still believe a freeze is not a fix."

Educators on strike want to be involved in improving the legislation, too. "They can bring us to the table and they can get this thing solved," said Dale Lee, president of the West Virginia Education Association, at a Monday rally. "I guarantee everyone out there would rather be in front of their students teaching today.

Along with the four-day strike, teachers have warned lawmakers that failing to meet teachers' demands will lead to educators moving to other states. A protester’s sign outside the capitol this week explained: “Country Roads: Leading teachers out of West Virginia.” Patty Hamilton, a second-grade teacher, similarly told HuffPost: "There’s just no reason to stay here, especially the ones who aren’t married."

The teachers federation is also worried about other state education legislation, including three bills proposing new charter schools and one that would lower the requirements to become an alternatively certified teacher. But Union leadership announced Tuesday that they would meet with Justice that afternoon. They told the picket line at the capitol to "keep the noise going and we'll come back and let you know where we go from there."

As HuffPost's Dave Jamieson points out, school districts could obtain court injunctions to force teachers to return to the classroom if the strike continues. He says that's not too likely, though:

"But judging from the honks of support from drivers passing protests and picket lines ― not to mention the considerable number of students who came out to protest at the capitol ― the teachers have a lot of public support behind them. They are gambling that legislators and Republican Gov. Jim Justice will make a satisfactory offer before they begin to lose leverage."

Although Justice told teachers on Monday that they "need to be back in the classroom tomorrow," they haven't indicated how long they plan to strike if no progress is made toward meeting their demands. For now, West Virginia public schools remain closed.