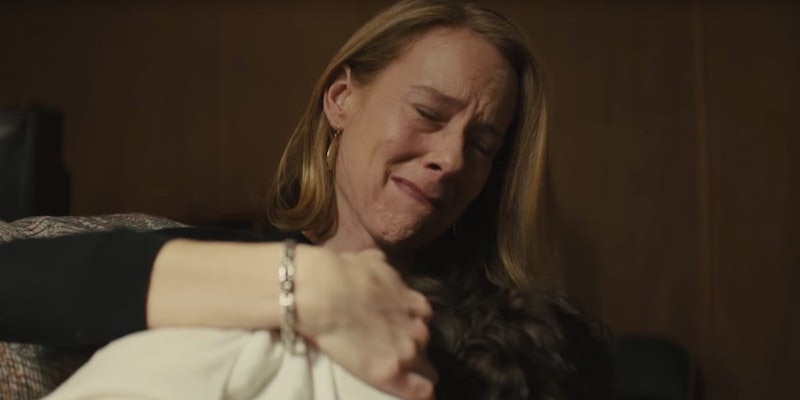 Former Office costars Steve Carell and Amy Ryan have reunited onscreen for a very different kind of project — the heartwrenching film Beautiful Boy, in which they play divorced parents to a son struggling with addiction. The film (playing in limited release now) is a brutal and unflinching look at how addiction affects not only people who get hooked on methamphetamines, but how their family and loved ones deal with the heartbreaking consequences as well. Ryan, who plays Vicki Sheff, hopes people from all walks of life goes to see Beautiful Boy in theaters, whether they directly identify with this experience or not.

"It's so beautiful," she says with a heavy sigh at the beginning of our conversation. "I'm glad you liked it – well, I guess 'like' is a funny word. But I'm glad you experienced it."

Based off the real-life memoirs of journalist and father David Sheff and son Nic Sheff, the movie is a realistic depiction of addiction and how there is no magic cure. Nic (played by Timothée Chalamet) slips in and out of rehab, flirting with sobriety each time to varying degrees of success and failure through both internal and external demons. He wants to get better — to get his life and relationships on track — but the pull of crystal meth is too strong to resist. The phrase, "relapse is part of recovery," is spoken out loud by rehab counselors and Nic multiple times. It's a narrative that has hardly, if ever, been a part of the mainstream conversation about addiction and the opioid crisis.

Beautiful Boy, while presenting extremely important lessons about addiction, is not a hard-stance, clinical PSA against drug use. It's a personal story that offers no solution but rather opens up a dialogue about what it's like for an addict and for the people who love them. There is no happy ending, but rather the implication that this is a lifelong journey for Nic and his family, which is ultimately true about addiction in real life. Director Felix Van Groeningen plays with time and memory so that Beautiful Boy is not just one linear story but rather a collection of moments strung together with a through line of the love David and Nic share as father and son.

"I was surprised by how Felix went forward in memory and backward in memory and I loved that so much," Ryan says. "That pulled me in as much as the emotions because, especially as a parent, you realize how fast time does go by. It seems like only yesterday that they were little kids. That's where the emotional punch came for me in such a personal way."

After about a decade of development, Beautiful Boy is debuting to a country deep in the throes of an opioid epidemic, so the beats of David and Nic's story ring true in a way that no one could have predicted 10 years ago.

"It's kind of a weird happenstance that it came together when it did because right now, I mean, with our own country's opioid addiction, there is no hiding this anymore," Ryan says. "That's how this film is going to resonate with people. It has touched so many lives, unfortunately. I love that the film isn't just about addiction — it's more about recovery and the family's recovery as well and how they treat it with love. I find it hopeful and I hope people do too, as much as it's a heavy watch. I find it quite uplifting."

Stories of addiction and what it can do to a person are never easy to tell, so Ryan went straight to the source material — David and Nic's memoirs — to bring authenticity to Vicki Sheff, David's ex-wife and Nic's estranged mother.

"The books by David and Nic Sheff are so rich and open and generous. They put their lives on the pages," Ryan says. "And they were so generously involved in the film. Vicki was a bit more shy about her participation but she saw the film and was very pleased."

Ryan lets out a small nervous laugh, then continues, "I drew from what was on the page in the books and our actual script and I felt like I didn't really need to go outside and do any other kind of emotional homework on it because they had given me the road map of their lives and how it was at that time."

Since Beautiful Boy isn't a traditional biopic about the Sheff family, Ryan was grateful to have some of the pressure taken off her performance. "I just tried to convey this honesty and openness," she says. "My heart just goes out to her because I can't imagine going through this with a child."

If anything, Ryan hopes Beautiful Boy helps to take away the stigma that so often is associated with talking about addiction. "You know, if you have diabetes you go get treatment," she says. "It's not a moral lapse in judgment, why people are addicted to drugs or alcohol. It really affects us all and can affect us all — it doesn't have prejudice on an economic class or race or gender. I still find there is so much shame and whispers about talking about it if it's someone in your own family or a friend of a friend or even yourself. I hope people will find ways to rid the shame out of it."

There will be tears, that's for certain. But Beautiful Boy is a film that deserves to be seen and should be seen by everyone, whether you're young, old, a parent or child, rich or poor, educated or not.

More like this
Christina Perri Had No Idea Her 'Twilight' Song Is On YouTube's Top 100 Chart
By Radhika Menon
The Biggest Differences Between 'Bullet Train' & The Book It’s Based On
By Arya Roshanian
At 14, D'Arcy Carden Was Sneaking Out To Parties & Crying Over Kurt Cobain
By Ivana Rihter
In Rap Sh!t, Social Media Has Main Character Energy
By Aramide Tinubu
Get Even More From Bustle — Sign Up For The Newsletter