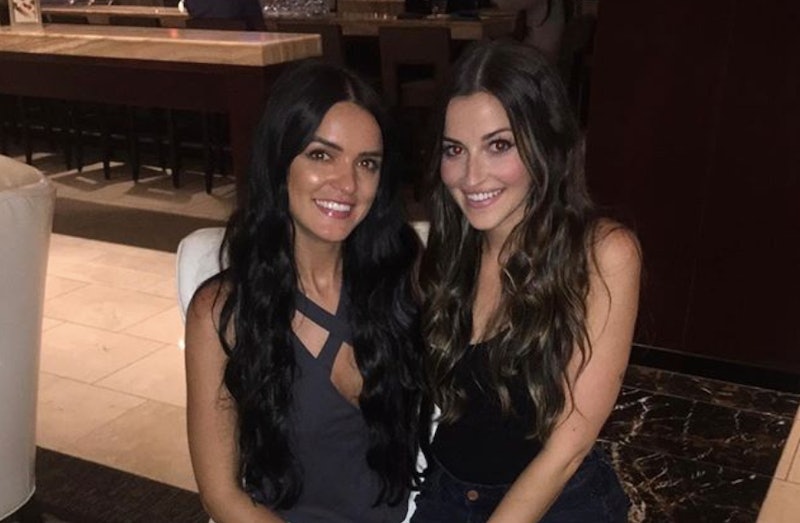 After competing on Nick Viall's Bachelor season and finding love on Bachelor in Paradise Season 4, Raven Gates knows this franchise inside and out, and she's dishing all to Bustle. Now, read what Raven has to say about the pre-hometown date drama on Arie's Bachelor season.

Things got real in Tuscany... really CONFUSING that is! Monday was the episode where we figured out who was going to hometowns and who was being sent home... or who would send themselves home? I don’t know about you guys, but this episode had many moments of confusion. What I do want to clear up, though, is that Tia isn't to blame for Bekah's Bachelor elimination. Was it a sticky, and, well, confusing situation of its own? Yes. But, I'll get into all that below.

First, we saw early in the episode that Jacqueline was questioning her emotions for Arie. Things were clearly going to have to be addressed there. But before it could get resolved, the first date went to Becca K. She had the first one-on-one date in the very beginning of the season, but time can dim a couple's fire on this show. Although, not for this pair, it seems! They headed to Barga to have a nice quiet picnic. Arie said he was looking for a more romantic connection with Becca; however, when ever they're together — be it a group date or cocktail party — they seem to have a very romantic connection already! I think maybe Arie was just confused. And, the rest of the episode proved that in many ways! But, I digress… During the night portion of the date, Becca told Arie that she was excited about the potential for a hometown and that, after their date that day, she was more comfortable with Arie coming to meet her family. I guess Arie felt the same way, because she got the rose! I’m super excited for Becca, and I can’t wait to see her in her element in Minnesota.

During Arie’s time with Becca K., Jacqueline was really questioning her relationship with him. And, then came the dreaded knock at the door... Every time there’s an unwarranted knock at the door on The Bachelor, you can expect some drama. Jacqueline found Arie in his room to tell him that she didn't trust herself or see a future with him, all while gulping down his wine. (WHICH I LOVED.) She then told him that she’s had moments of doubt on her date with him and she couldn't justify going to hometowns with him. This is where I, along with the rest of America, became REALLY CONFUSED. Was she staying? Was she going? Why were they kissing so much if she was leaving?

Arie asked her, “Are you struggling with being ready or being interested in me?” Ouch. Sounds like Jacqueline hurt his ego. I can’t blame Arie, I would ask the same thing. In any case, she left him confused, and they never really said goodbye either, they just made out... a lot. He walked her to the door and said, “If you have any regret, come back to me.” I wonder if Jacqueline was listening to her intuition that he’s not the right one, or if she was sabotaging herself. This is one question I hope gets answered at the Women Tell All.

After the Jacqueline drama, the second one-on-one went to Lauren B. They biked around the town of Luca and got some ice cream. Lauren seemed happier on this date, but she was still so quiet. I want to see Lauren get more in depth with her feelings and just conversation in general. Arie told her that he’s concerned about her being ready for hometowns. Lauren said that being vulnerable freaks her out and that she’s afraid ever since her last breakup that she’ll be let down. Understandable, but I hope she doesn’t sabotage her chance of really finding love with Arie! I have wondered if all of this closed-offness from Lauren was just a matter of editing, but Arie told us in his interview that Lauren is “hard to read." So, it’s not just us. Again, Arie was left confused.

During their night portion of their date, Arie tried to dig deeper with her. He told her he needs to know how she feels about him meeting her family. Lauren told him that it’s hard for her to connect her emotions, but that she’s falling in love with him. And……. ARIE GOT UP AND WALKED AWAY. What?!?! Now, I'm confused. Arie, isn't that what you wanted her to say all day?

Then, Lauren told the cameras that him walking away made her start to regret being that open. (Just as we'd just finally gotten somewhere!) But, just then, Arie came back and gave her a rose. Raise your hand if you’re confused. (I’m raising both hands.) In any case, I am excited for Lauren getting a hometown! I’m really curious to see if she loosens up and lets down her guard with her family there to support her. I’m rooting for you, Lauren! Don’t let past relationships get in your way with falling in love with Arie.

After Lauren's date, the third one-on-one went to Seinne. I have to say, I thought Seinne was a definite for a hometown, but there was no romantic connection on this date. So, he sent her home. I’m so sad about that, but I want Seinne to have the heart-throbbing, can’t-think-straight kind of love. Arie was not it for her.

With Seinne gone, there were two more roses to give out, and three girls going on the next group date: Kendall, Bekah, and Tia. I know all about a three-on-one. This was the kind of date I went on before getting my hometown rose and IT. IS. NERVE-WRACKING. You don’t get the kind of time the other girls on the one-on-ones got, and you’re having to have two other girls tag along on your date.

The four of them headed to Villa Royale, and Arie took Kendall aside first. I love how self-assured Kendall is. She’s not afraid of explaining her concerns, and she is confident in how she feels. Their time together went well, it seemed. Arie then took Tia aside. Now, this was kind of difficult for me to watch, since you all know Tia is one of my best friends. But, let’s get into it...

When Arie took Tia to the side, she used her time to tell Arie that she doesn’t believe Bekah is ready for a relationship, much less marriage. I don’t think that Tia was maliciously throwing Bekah under the bus — but, needless to say, there was a bus, and there was Bekah right in front of it. Under all of the pressure from this show and situation, I don’t think Tia thought this one completely through. But, you also have to understand that not all things are shown in an episode. (Filming goes on much longer than a two-hour episode.) So, I’m not sure what happened for Tia to feel like she needed to tell Arie these things.

However, I do know Tia’s heart, and Tia is not a malicious person. I think she just had a lack of judgement. If she did feel this way about Bekah, I wish she would have spoken up sooner — because now it just looks calculated.

Watching it, I was conflicted. Had Bekah said something off camera? Was Tia trying to secure a spot on hometowns by telling Arie this information? I mean, on my season, I did tell Nick that Corinne couldn’t wash a spoon, and that she wasn’t ready for marriage... But, I learned through all that, that Nick didn’t need me to tell him. He was very smart and very aware of each girl. I think Tia will have to learn the same lesson here. Arie doesn’t need her to talk about the other girls, he is aware of what's going on. He already mentioned all the time to Bekah how he was worried about her not being ready. He didn’t need anyone to tell him that. I can see how viewers might be mad at Tia, but, for what it’s worth, Tia is not calculating or malicious. Tia is blunt and has word vomit. Always has, probably always will. I wish I could go back in time and tell Tia to focus on her relationship with Arie and not to compare other relationships... but, I cant.

After that drama, Arie gave out the first rose. It went to Kendall. (And the crowd goes wild!) Now this was one moment in the episode where I was not confused! Kendall SHOULD have gotten that rose. But that left only one more rose to go. It was Bekah vs. Tia. I was rooting for my girl Tia, but I do really love Bekah as well. Although Bekah’s chemistry with Arie was undeniable, I think Arie couldn't get over the fact Bekah is 22, and he has been hung up on that since the very beginning of the season. So, Tia got the rose.

Arie walked Bekah out, and she handled herself so well. She even gave Arie a confidence boost by saying, “It’s going to end well for you, I know it is.” Then in the car, she broke down. I get it, Bekah! Believe me, I do! But, even with Bekah going home, I don’t think it had anything to do with Tia. Arie said in his interview while sending Bekah home that he didn’t see their lives meshing, but that she stole his heart. I couldn’t agree with that more. It just wasn't meant to be, no matter what anyone said or didn't say.

With that confusing episode behind us, I’m so excited to go to these girls' homes and meet their families! My hometown was one of my favorite memories with Nick and The Bachelor experience. I hope it is for these girls, too...