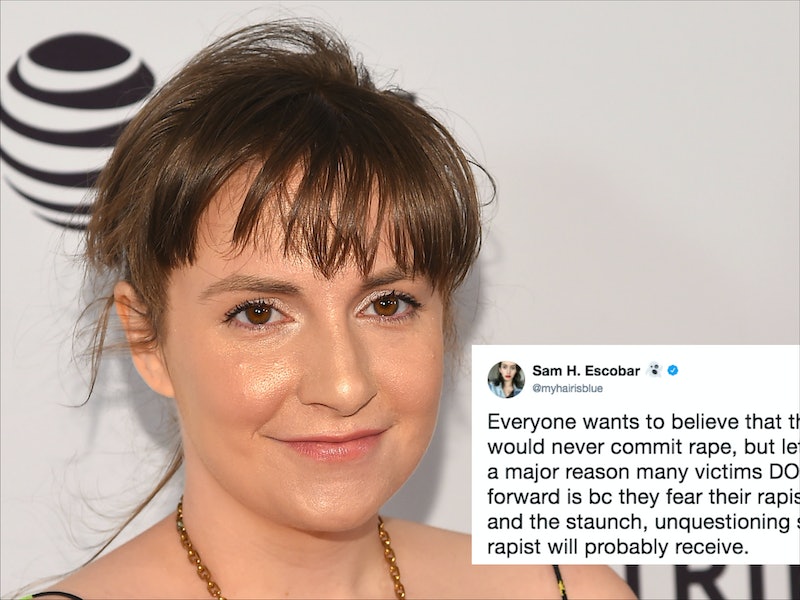 Even if the most basic tenet of your feminism is to believe women, no matter what, you could face an impossible decision: If my brother, my male friend, my husband, were accused of sexual abuse, would I believe his accuser? In the midst of a cascade of #MeToo accusations, several avowed feminists have chosen to make an exception. Lena Dunham, most notoriously, when she accused actress Aurura Perrineau of lying about being assaulted by Dunham's friend Murray Miller. Jenni Konner, who joined Dunham in doing so. Dozens of Sen. Al Franken's former Saturday Night Live coworkers, who noted in a defensive statement that Franken treated them "with the utmost respect and regard."

Let's be clear: If you choose to believe women, you choose to believe every woman. Even when it's uncomfortable. (Especially when it's uncomfortable.) You cannot pick and choose which feminist values to align yourself with. If your knee-jerk reaction is "I can't imagine it, so it can't be true," then you are allowing your privilege to get the better of you.

We'll start with Dunham, who has swiftly become the public face of the moral question. Last weekend, Dunham defended her friend Miller, a former Girls writer accused of rape by Perrineau. "Our insider knowledge of Murray’s situation makes us confident that sadly this accusation is one of the 3% of assault cases that are misreported every year," she and Konner said in a joint statement. (On Saturday, Dunham released a second statement: "I now understand that it was absolutely the wrong time to come forward with such a statement and I am so sorry.")

Why would Dunham, who tweeted about the importance of believing women as recently as August — "Things women do lie about: what they ate for lunch. Things women don’t lie about: rape" — do a one-eighty so abruptly? Dunham offered a clue in a tweet posted alongside her statement with Konner:

In short: Yes, I believe women — but not if they're accusing a man who I love, whom I trust, whom I cannot imagine assaulting a woman.

This is a privileged position. It echoes why men and women alike argue that we "don't need" feminism: Because, in their worldview, women are equal to men — and where they're not, it's women's fault. Choosing to believe a worldview that is comfortable for you, a worldview that correlates only with your personal experience — "If it's not happening to me, it's not happening" — is why men don't have any inkling of the kind of daily harassment women endure.

It's why the wealthy are more likely to believe in social mobility. It's why white people often don't believe that people of color face consistent and pervasive discrimination. It's why some cis people don't believe it's possible to not identify with the sex you were assigned at birth. Make no mistake: It is a privilege to not experience those kind of challenges. You may not have experienced these things in your life, but, dammit, they exist.

That's not to say that it's easy to believe women on principle. It would be difficult for even the most ardent feminist if your brother, your best friend, your boyfriend, were accused of sexual abuse. Even if it's just that "nice guy" you know, it'll shake you up. It's a gut-wrenching reminder that you may never be safe. That may not truly know the people you love the most.

I get it, I do. It's easy to not believe women when to believe women would be to admit those things — not only that they're real, but that you, yourself, do not truly know a person you deeply care for. It's easy to point to that "three percent" statistic and shrug off the accusation. It's easy, but you shouldn't get to do that. No women who has ever been raped gets to do that.

And if you do believe that a woman is lying? If your decision is to make an exception — to believe in the highly unlikely scenario that the accuser is lying — then there's a right and a wrong way to approach that, too. Every time you tell a friend or your Facebook feed or your millions of fans that you believe a woman has made it all up, you propagate the myth that women lie about being assaulted. You make it harder for victims of sexual abuse to come forward. You force people who have already been deeply traumatized to fear your wrath, as well.

I shouldn't have to tell you how critical it is to believe women. If I did, you wouldn't be reading this article in the first place. What also needs to be made clear is that when you believe women on principle, you believe all women. No exceptions. No "what if"s. Your lived experience does not, and cannot, speak to the credibility of others' experiences. Believe that.