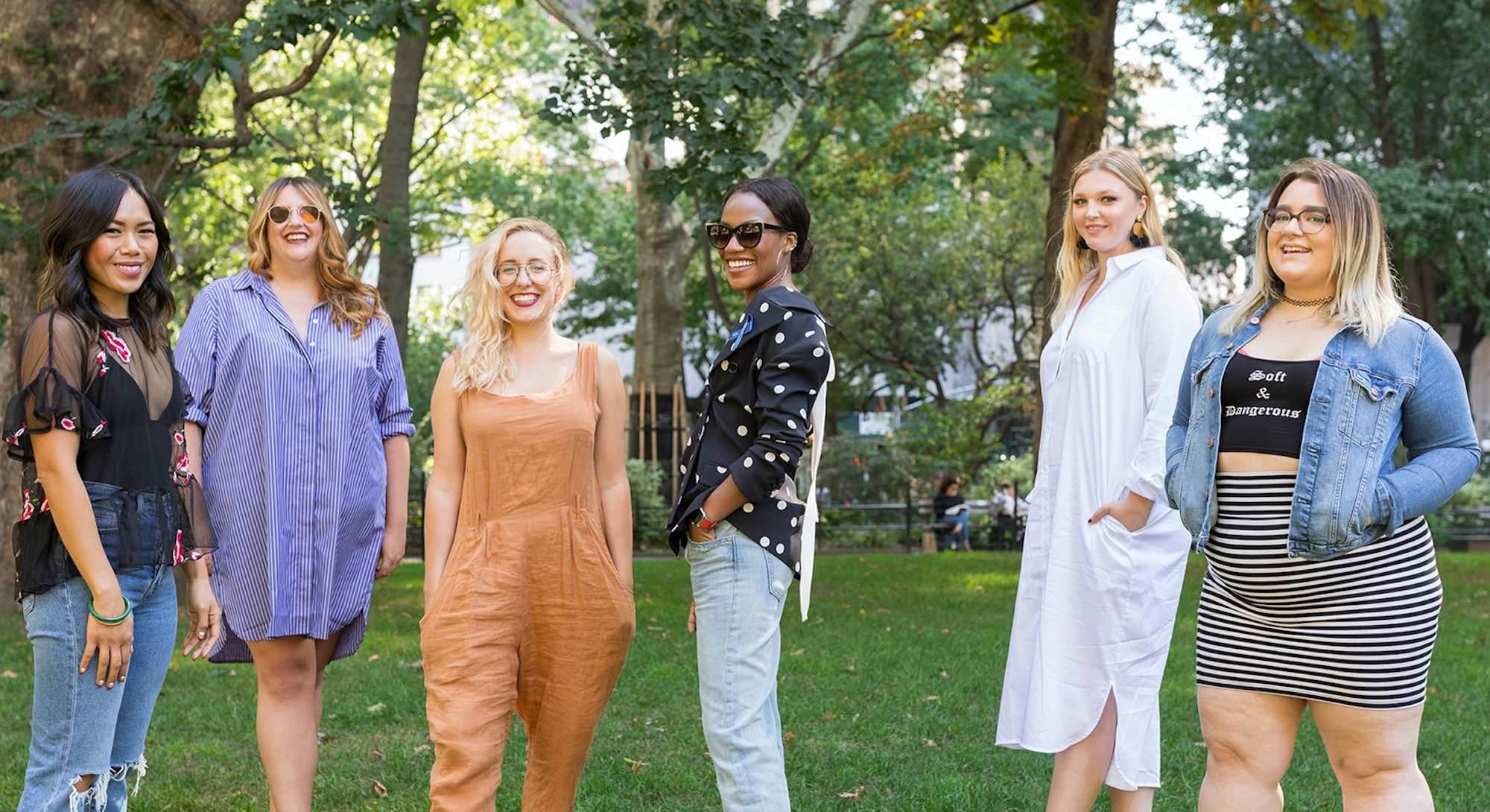 The way we talk about clothing is changing. Consumers are leading the trend conversation more than brands. The market is slowly (slowwwwwly) becoming more size inclusive. And many people are starting to reject the idea that there are a certain set of rules about what you can wear depending on what your body looks like. But even with all that progress, one longtime, subtly fatphobic trope seems to remain, especially in mainstream media and advertising: The idea that the ultimate compliment you could give someone's outfit is that it "is so flattering" on the wearer.

Members of the fat positivity movement have been suggesting we all f*ck flattering for a while now; after all, the seemingly innocent phrase is generally just a euphemism for "that makes you look skinnier" or "that makes your body look like an hourglass shape, a.k.a the 'ideal' shape of a woman." At Bustle, we've always aimed to find more creative ways to talk about clothing, focusing instead on how an outfit is crafted or how it makes the wearer feel — in fact, this guideline has been a part of our fashion and beauty coverage since 2014.

But the word "flattering" is just one example of the harmful ways society has shamed our bodies under the guise of giving a compliment or advice. The six editors on Bustle's Fashion Team all grew up in different parts of the country, under different circumstances, in different bodies — and yet, we've found common ground in our experiences with the way we were taught to interact with clothing, and how we do so now

Here's why we're officially taking a stance against the word flattering and all those other ways society has tried to shame us out of wearing whatever the hell we want.

It feels like the word flattering has been following me around since I was a kid, an obnoxious presence whose judgmental whispers dictated what I should and shouldn't wear. I was chubby and quite tall when I was young, which meant that I was all but excluded from shopping in "normal" kid stores. Instead, I was forced to go to the young women's section in department stores from the age of seven or eight, beholden to the instructions of well-meaning department store employees.

"You don't want to wear horizontal stripes, honey," they'd say as they helped my desperate mother locate an outfit for school picture day. "You'll end up looking too thick around the middle."

As I got older, flattering was something I saw in fashion magazines, on television, and heard from friends. Group shopping trips would have made a great drinking game if I had been legally allowed to drink: Drink every time you hear the word flattering in any of its forms.

"Oh my god, that is so flattering on you," one friend would say. "Do you think this flatters my ass?" said another. "Ugh I am taking this off, it is way too unflattering."

And until recent adult years, the word remained. It wasn't long ago that literally every women's fashion publication was telling you how to flatter your figure, and it felt like every clothing advertisement did, too. For much of my 32-year-old life, flattering wasn't just a word, it was a directive: A requirement for dressing, and a non-negotiable outcome.

Luckily, things have changed. I hear the word less and less now, as many publications and clothing brands are making concerted efforts to make women feel less like sh*t than they ever have before. Dressing for yourself and only for yourself is an outcome of modern feminism, one unburdened by rigid ideas of what a body should look like or how a woman should dress.

And, unlike any of those other periods of life, I feel right at home in this new flattering-free environment, like it's where I (and we) were supposed to be all along. I wear what I want, styled how I want, despite the fact that yes, I am still thick in the middle. Before, I begrudgingly accepted that my entire wardrobe should center around the word: Now, I don't allow flattering into my brain, or within A 50-mile radius of my closet.

Flattering is never a word that comes to mind when I’m putting together an outfit, nor has it ever really been a consideration of mine. I feel like building a sense of personal style is a trial-and-error thing. And there's no set time frame for it, either. With trends developing and evolving each season, I am constantly adding and getting rid of things in my wardrobe based on preference to my personal style.

I buy and wear things that I like and am drawn to, rather than things I “should buy” because they are “flattering." And yes, there are definitely pieces I have and outfits I put together that are traditionally considered to be “unflattering.” But dressing for anyone other than yourself is an unnecessary burden. It’s not realistic to dress in a way that everyone accepts. What you choose to wear should be your choice whether someone else thinks it looks good or not.

I grew up believing that my body looked a way that it didn't. I can only say that (and truly believe it) now thanks to the kind of post-adolescence clarity that getting older brings. I flatly, completely believed that there were certain things I simply couldn't wear because I was too tall, or my hips were too wide in comparison to my chest. This was perpetuated by hours and hours of watching makeover shows, and the never-ending message that learning how to "work with your body shape" was paramount to dressing well.

The idea of wearing things I love and disregarding what the proportions of my body looked like in them was completely foreign to me, maybe even laughable. Buying things that were flattering was my only option as I saw it; it was my mission. Realizing that I could simply buy clothes that made me feel good (and therefore, look good to me regardless of what society says that means) was a revelation that took many, many years to sink in. Some days, I still find myself thinking about the proportions of my body and clothes as a puzzle — that one part has to fit the other, or it doesn't make sense. But for the most part, the freedom of simply wearing what makes me feel happy has been freeing, and what makes me feel my best.

If I'm being completely honest, I never realized the word flattering was so problematic until I started working at Bustle.

Growing up, I was always the shortest and the roundest, and while my body would change a bit over the years, I ultimately only made it a couple inches over five feet with short legs, an even shorter torso, and a small chest. As a result, I would avoid wearing countless types of clothes and shoes because they "weren't meant for someone with my body type" — they were "unflattering," as magazines would call it. Magazines would also teach me that I should only wear hip-hugging, low-rise jeans, because high-waisted denim would shrink my already non-existent torso. I also remember reading that I should avoid baggy, oversized tops or sweaters like the plague as they would make me look like a child, just like wearing ballet flats or heels under three inches would.

As I grew older, I would eventually figure out that I could and should wear whatever the f*ck I wanted, Leandra Medine-style, so long as it made me feel good. It wasn't until a few years later, though, that I'd finally shake the word flattering from my vocabulary, thanks to my Bustle family.

At first, it was difficult — the word is actually everywhere — but the more I thought about it and the way flattering was and continues to be used, the angrier it made me. So many years wasted not wearing things I had always wanted to, because of one little word!

I know my experience isn't unique, but for those who are still bounded by made-up fashion flattery rules, listen up — life is too short to not wear those jeans or that dress or those boots. Forget what you were taught or what you read: Wear whatever you want because it empowers you and makes you feel confident. That's the only fashion "rule" you need to be following.

I can’t talk about my style evolution without talking about what I wear underneath my clothing. That may sound strange, but stick with me. In my mid-teens, which is when I became sexually active, I started wearing lacy underwear and thongs that made me constantly uncomfortable. Truthfully, I was giving in to this idea that to be sexually appealing to partners, I had to wear Victoria’s Secret-esque undies. But about eight years later, as I moved into my mid-20s, I decided to completely overhaul my underwear wardrobe to only include garments with comfy fabrics, full coverage, and high waistlines.

My new undies collection is more pin-up girl than VS Angel, and I wouldn’t go back. When I contemplated changing my undergarment game, I did wrestle with the idea that future partners may not find my new undies sexy. But I ultimately decided that fear was a bullsh*t reason for not doing what I wanted to do. I deserve comfort, and I deserve to make my own decisions without “sexy standards” getting in the way. My new undies make me feel comfortable in my skin, which is what I believe sexiness is built on.

Plus, if anyone ever underwear-shames you, they probably don’t deserve to be seeing your underwear in the first place.

I have very specific memories of thinking that if I wasn't cinching my waist, I was doing clothes wrong. A lot of that definitely stemmed from a show that helped women realize what they should not wear, in which the host would frequently declare that the subject had "such a cute little waist!" they were apparently "hiding" from the world in all their so-called frumpy clothes. It instilled this bizarre idea in me that, because I had naturally developed to have an hourglass body shape, I owed it to everyone around me to belt my dresses or wear tight tank tops. Draping myself in oversized shirts would have been a public disservice, apparently.

It wasn't until well after college that I felt comfortable enough to completely abandon these ideas. I discovered I preferred dressing in outfits that fit less into the traditional idea of femininity, trading in my vintage-style dresses and low rise jeans for loose trousers and baggy button-downs.

Of course, the fact that this was my dilemma shows the immense amounts of privilege I had — and continue to have. My struggle with people who teased me for being naturally thin is nothing compared to the fatphobia many other people face on a daily basis. We should all have the same opportunity to discover the types of outfits that actually make us happy, rather than trying to follow arbitrary rules made by someone else. If everyone felt they had permission to think outside the flattering box, our OOTDs would become a lot more interesting.