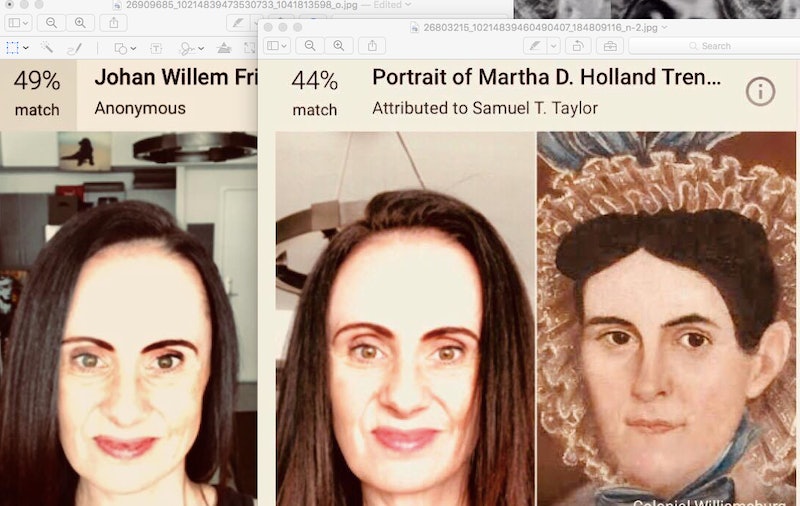 If you've tried the new museum portrait feature on the Google's latest way to send you down a rabbit hole, and you're wondering why you can't find your painting lookalike on the Google Arts & Culture app, you're not alone. Most of the results for my portrait twins noted that we are only a 40 percent match, which means maybe my museum-portrait doppelgänger isn't out there. Despite trying to find my museum-portrait lookalike several times, and matching with both men and women, I never received a match that was higher than 49 percent. And, while perusing the Google Arts & Culture tweets on Twitter Moments, I found the same result.

Additionally, the museum-portrait feature is not yet available to everyone so if you can't find it on your app, you're not losing your mind. If you do have it, and you dedicate your entire day to snapping museum-portrait selfies, perhaps you can find one that matches you 100 percent. And, while you're searching for your perfect match, keep this in mind per Twitter user Brooke Cain: "Warning: The museum portrait doppelgänger match on the Google Arts & Culture app may not be good for your self esteem."

If you do get a terrible match, like Twitter user Vanessa Salkova, who wrote: "I will not be posting about that museum self portrait app which I know is off brand but it’s to hide the fact that it’s told me I look like St John the Evangelist twice."

Perhaps this is why the matches seem to trend toward not being 100 percent identical. Google doesn't want to ruin your day. Good thing this app isn't matching your portraits up with other portraits for dates.

This one is pretty good. Twitter is literally a mix of people angry that can't find the app at all, people who are mad the app suggested they look like Ben Franklin, and people who the app clearly loves by giving them totally boss results.

But, even the museum-portrait matches that are crazy accurate still only say 49 percent.

Whether your museum-portrait results are accurate or not seems to be completely random.

And, some of the result make absolutely no sense.

I mean, how can someone look like both a young woman and an old man at the same time? I guess the vision is in the eye of the artist.

Or, in this case a child, a young woman, and an old woman. Maybe Google has stumbled on museum portrait age progression technology.

And, because the museum-portrait feature has only rolled out in select locations, other people are having major FOMO about not being able to see whether or not they look like Ben Franklin or Frida Kahlo.

But, please don't cry if you don't see it right away. First follow these instructions, then if you still don't see it let the tears flow.

If you can't see the feature on the Google Arts & Culture app, perhaps it's for the best. This guy was pretty irked with his match.

Self-conscious about what museum portrait your result might return? Have your 'rents or a friend test it out first.

If you don't have the museum-portrait feature yet, you can spend your time matching people with grumpy celebrities instead.

But, if you do have the feature on your Google Arts & Culture app, take eleventy million selfies and see how many crazy results you get. It's in no way a reflection of how you really look; it's dependent on an algorithm designed to keep you using the app all damn day, and if Twitter is any indication, it seems to be working.