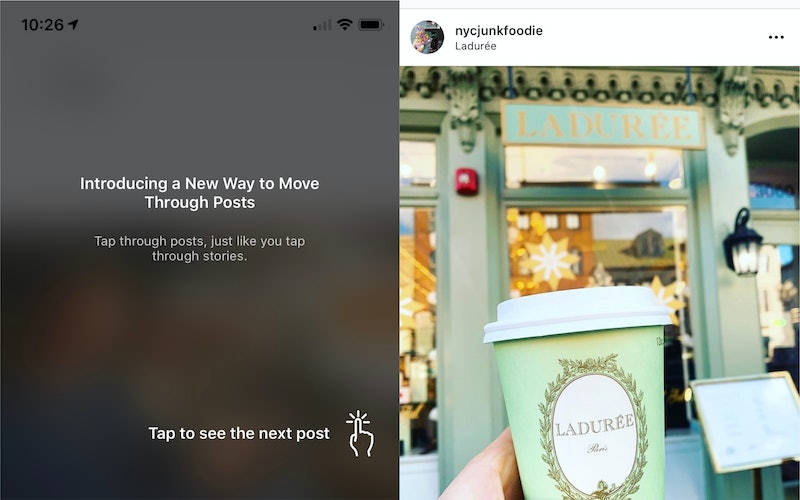 UPDATE: Instagram has responded to Bustle's request for comment with this statement: "Due to a bug, some users saw a change to the way their feed appears today. We quickly fixed the issue and feed is back to normal. We apologize for any confusion." An Instagram spokesperson confirmed that restarting the app should return it to scrolling.

EARLIER: It's that murky time between Christmas Day and New Year's where nobody's quite certain what day of the week it is or even where they are geographically, so naturally most of us are ignoring the time-space-holiday cookie continuum by doing what we do best: scrolling into an Instagram abyss. Some users, though, are likely opening their apps this morning and wondering: "Why can I scroll down on Instagram?" As many users are reporting on Twitter, Instagram is showing a message that reads "Introducing A New Way To Move Through Posts," which then instructs the user to tap, rather than scroll, to see new content — similar to the way users tap through Instagram Stories to see new content.

Bustle has reached out to Instagram for comment on the rollout, and will update this post when we hear back; in the meantime, though, there is an explanation for what's happening. In October, Instagram confirmed to TechCrunch that it was testing a "tapping" feature within the Explore page. “We’re always testing ways to improve the experience on Instagram and bring you closer to the people and things you love," said an Instagram spokesperson to TechCrunch at the time. After tweets from users who are experiencing the new update app-wide began surfacing on Dec. 27, it seemed that the feature was no longer just in testing, but rolling out to a large number of users all at once.

Here's the image that people are seeing on their screens when they log into Insta this morning.

This video from journalist Alexis Benveniste shows it in action, giving a sense for how the the "tapping" feature operates with the slideshow function.

Judging by the number of tweets rolling out from the update, it is experiencing a fairly wide rollout today; moreover, it affects the entire app, rather than just the Explore page. Bustle has reached out to Instagram to see if there's a way users can revert back to the old form of scrolling, and will update this post upon hearing back. That said, it may be safe to assume given the nature of the rollout that there won't be a way to bring back scrolling on your app — the closest you may be able to manage is looking at Instagram on desktop, which at the time of publishing still appears to be using the scroll.

But, as Josh Constine at TechCrunch points out, this change may be in the users' favor; not only is it meant to combat thumb fatigue from swiping, but it also allows users to see the entirety of content all at once, rather than only seeing bits of it while scrolling and tasking yourself with getting the full thing exactly in frame. So while it may be a bit jarring to get used to, odds are this update will be like so many other unexpected social media app updates of our past: super weird at first, but within a few weeks, it will be the new normal.