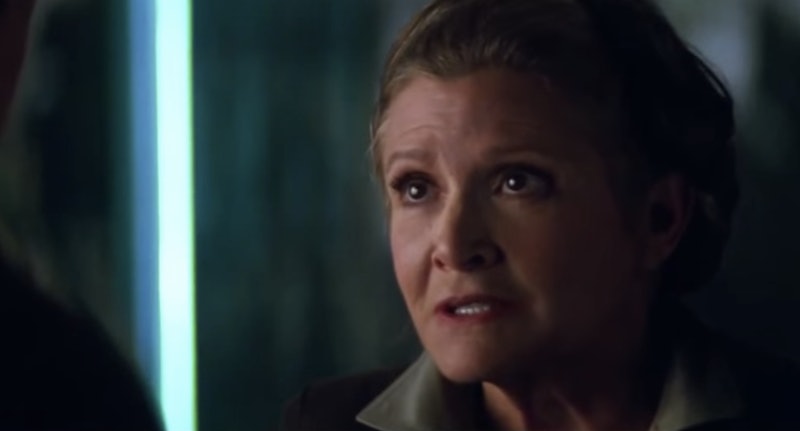 Beloved Star Wars actress Carrie Fisher died Tuesday from complications after a severe heart attack last week, and millions of fans have turned to social media to express their grief for the loss of the late star. Many people have been sharing the iconic photos of Fisher from the first iteration of the classic film series, when she was a young woman almost 40 years ago, but sharing those images of her don't do Fisher's whole life justice. Fisher should be remembered as General Organa, not Princess Leia, because she was so much more than the young woman she was 40 years ago.

Now this is not to say that young Leia wasn't also a complete badass — fans of the series can definitely attest to that. Leia survived the destruction of her planet and life as a political refugee, kidnapping, slavery, and learning the true, dark origins of her family. She let herself open up enough to fall in love, and she never let anyone steamroll her. She was a strong female role model at a time when those were far too scarce, and the millions of women across the world who were inspired by her will always hold young Leia close to their hearts.

But older Leia, like older Fisher, is the more complete story of who the character really is. Her badassery compounded upon itself as she continued to fight against the remnants of the Empire — almost 40 years in real world time later, Leia had not only stayed active in the Rebellion, but ascended in the ranks to become an important and compassionate leader. She also suffered new emotional wounds, like losing her son, brother, and husband, but didn't let those stop her either. Leia stopped being a princess as a teenager when her home planet of Alderaan was destroyed, and from that day on, she was a soldier more than a royal. The character's legacy is a fighter, not a monarch.

Likewise, Fisher's life after the first Star Wars films is a better and more realistic picture of who she was as a person. She's a woman who suffered greatly and overcame, who never lost the ability to be funny and deep, who always stood up for herself and didn't let the world take her down. She channeled her struggles with mental illness and drug abuse into writing. She raised her daughter into an educated and accomplished young woman, while being completely honest about her mental health struggles. Fisher's whole life is worth celebrating, not just a small part at the beginning.

Fisher was a passionate and vocal advocate against the ageism she faced in Hollywood, and even unintentionally perpetuating that by sharing only pictures of when she was young is a disservice to her memory. She was so much more than just her most famous character — she was a mom, a daughter, a friend, and a talented professional.

A big part of her is who she became as she got older and wiser. Tying Fisher's memory to her character is fine, especially for those who deeply love the Star Wars franchise, but never forget that Organa and Fisher were both strong, fierce, brave, incredible women, especially as they aged.

More like this
UK Viewers Will Have To Wait To Watch The Handmaid’s Tale S5
By Maxine Harrison
Lego Just Announced Its 'Black Panther' Set Release Date
By Maxine Harrison
Margot Robbie Breaks Her Silence On *That* Viral 'Barbie' Moment
By Maxine Harrison
‘RHOSLC’ Star Jen Shah’s Arrest & Legal Drama, Explained
By Brad Witter and Jake Viswanath
Get Even More From Bustle — Sign Up For The Newsletter