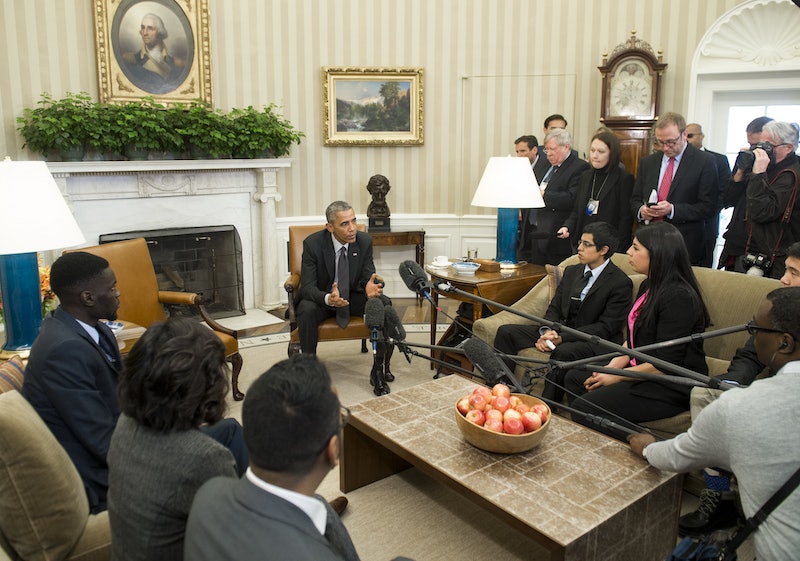 President Trump is reportedly making a decision by Tuesday on the fate of one of his predecessor's most controversial policies, the Deferred Action for Childhood Arrivals, or DACA, program, enacted through executive action. DACA allows 800,000 undocumented immigrants, brought here as children at least 10 years ago, to get driver's licenses, attend universities, and work legally without fear of deportation. But, unlike other parts of Obama's legacy, like healthcare or financial reform, President Trump can change or eliminate DACA as he pleases, because President Obama couldn't make DACA into law. Instead, it's another part of the long inability of Washington to find a solution for dreamers.

DACA, enacted in 2016, grew out of policy previously known as the DREAM Act (Development, Relief and Education for Alien Minors), which was first proposed in 2001, and would have given a path to full citizenship for those brought to the US illegally as children. The DREAM Act floated around Washington without ever getting passed. It was supposed to be part of a bipartisan immigration reform bill in 2007, but that broader law failed in Congress. The closest it got was in 2010, about halfway through Obama's first term, when a majority supported it in both houses, but it couldn't clear the 60 vote threshold to pass a Senate filibuster.

By that point, it was already clear that the Republican party was coalescing into a more hawkish stance on immigration—just three Republican senators supported its passage, and even Senator Orrin Hatch (R-UT), who devised the initial version of the bill in 2001, voted against it. After the DREAM Act failed, Obama faced a Republican House of Representatives starting in 2011, which made it unlikely for him to be able to get the bill passed.

But Obama had made a promise, back when he initially ran for president in 2008, to help undocumented immigrants who had been living in America for an extended period of time. In June of 2012, Obama announced DACA as a means of helping the child immigrants (often referred to as dreamers, after the act that never passed) through enforcement policies at the Department of Homeland Security.

After Obama announced, it was assailed by Republicans as an unconstitutional power grab by the president. They argued that the president does not have the legal authority to change laws under the Constitution without Congress. Opponents of the policy felt that the executive branch was duty-bound to enforce immigration laws, and deport people here illegally unless they were given protection by law passed through Congress. In 2013, the Republican House voted to defund the program, though the Senate didn't follow through.

The Obama administration argued that the executive branch actually has large latitude on immigration enforcement. They claimed that since Immigration and Customs Enforcement doesn't have the manpower, time, or budget to deport everyone, enforcement would have to by necessity prioritize going after certain immigrants and not others. "In the absence of any immigration action from Congress to fix our broken immigration system, what we’ve tried to do is focus our immigration enforcement resources in the right places," Obama said in his remarks announcing the program.

Obama won the 2012 election, partially with a strong showing of Latino voters, which many attributed to DACA. The Republican party in 2013 put together an "autopsy" report looking at what went wrong, and assessed that it had to reach out to minority voters, and creating a path to citizenship for illegal immigrants was an important start. Both parties worked on a comprehensive immigration reform package, known as the "Gang of Eight" bill. Gang of Eight went well past the DREAM Act and gave all undocumented immigrants without criminal records a path to become citizens, in exchange for tougher border security. It passed the Senate with a healthy margin, with 14 Republicans joining all Democrats.

But in the midst Republican leaders trying to move towards a position of helping immigrants, its own voters were rebelling. House Majority Leader Eric Cantor (R-Va), the second-highest ranking Republican in the House of Representatives, lost his primary race to David Brat, a political neophyte who attacked Cantor as soft on immigration. After a debate held in the basement of the Capitol House Republicans decided not to support the bill. Gang of Eight died, and so did most remnants of GOP support for legal status for immigrants.

In 2014, Obama tried to expand DACA to parents of children born in the United States with the Deferred Action for Parents of Americans and Lawful Permanent Residents program, known as DAPA. Several states with Republican governors promptly sued the Obama administration, arguing that DAPA was unconstitutional. In United States v. Texas, a federal court stopped DAPA from going into effect. In 2016, the Supreme Court, then missing its 9th justice as Republicans in the Senate blocked Obama's pick for the spot, sent out an unsigned 9-word ruling on the case, affirming the lower court ruling that DAPA couldn't go into effect but not ruling one way or another on the constitutionality of the program itself—and by extension, of DACA.

DACA has been left in a strange legal limbo. There is no conclusion on whether or not the Obama administration had the legal right to enact it in the first place, but it hasn't been stopped by the courts. Many Republicans have expressed support for helping the dreamers, but have stopped short of actually enacting legislation to do so, and treat DACA as unconstitutional as enacted.

But then, of course, there's Donald Trump. Trump ran in 2015 and 2016 with a platform extremely harsh on immigrants, saying at some points that all 11 million illegal immigrants needed to be deported. But when he won the presidency, though Trump said he'd stick by his promise to end DACA, he told Time Magazine, “We’re going to work something out that’s going to make people happy and proud.”

In June of 2017, 10 states warned the Trump administration that if it doesn't end the program, they would sue. One of them, Tennessee, backed down from the suit on Friday. The Trump administration is leaving the fate of the program, and its 800,000 recipients, in limbo. And Trump can do that, because no matter how much he wanted to, Obama was never able to make DACA permanent law. Numerous Republicans have suggested a solution that would make something like DACA law through Congress. But it's still unclear what that would mean. Yet again, after 16 years of trying, a solution for the dreamers seems out of reach.