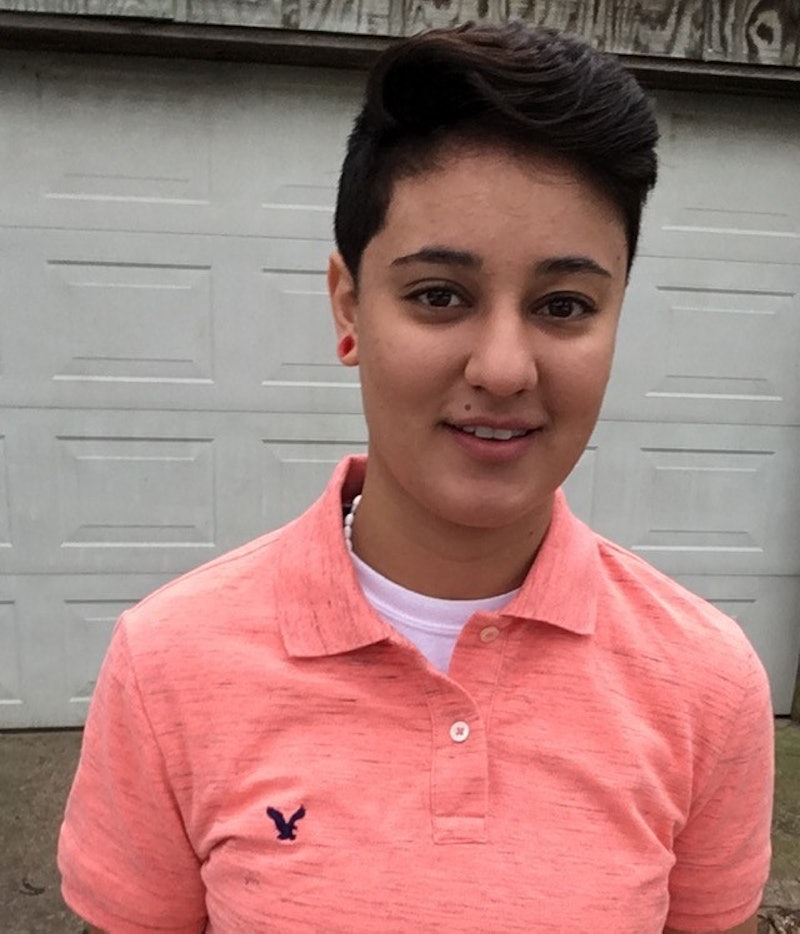 As she spoke to local reporters about her family's experience in America and how Immigration and Customs Enforcement (ICE) officers had already arrested her father and brother, undocumented immigrant Daniela Vargas had a slight but noticeable Southern accent. It makes sense, of course; Vargas was raised in Mississippi. However, the faint red state drawl was an interesting accompaniment to Vargas's speech, which was calmly pro-immigrant and implicitly anti-Trump. "A path to citizenship," Vargas said, "is necessary for DACA recipients, but also for the other 11 million undocumented people with dreams."

Vargas's Southern accent — as quintessentially American as baseball, country music, and Mark Twain — is an audible reminder of what many anti-immigrant policy advocates seem to forget: that immigrants are American too. Before her arrest attracted national attention, Vargas was a typical 22-year-old American. She manages a small Mississippi store, and hopes to be able to afford to finish college.

Vargas herself did not decide to come to the United States. Her parents brought her over from her native Argentina when she was seven years old. The family initially came to America on a three-month visa, but they stayed after it expired, and she has lived in the United States ever since. In an attempt to address the unique concerns of undocumented immigrants who came over as minors, like Vargas, the Obama administration created the Deferred Action for Childhood Arrivals (DACA) program, which protects childhood immigrants from deportation for two-year periods, after which they must apply to renew their DACA status. DREAMers is the name often used to refer to beneficiaries of DACA because of the DREAM Act (which failed to pass Congress). Pew Research estimates that over 750,000 people, including Vargas, have received permits through the program.

"This is where she grew up," Vargas's attorney, Abigail Peterson, tells Bustle. "This is where her friends are. Her writing skills are in English, so this is her home." But not everyone agrees with this sentiment, including the president.

"DACA is a very, very difficult subject to me," Donald Trump said in February when a reporter asked whether he would end the program, promising to handle the issue "with heart." During his presidential campaign, however, Trump promised to end the program "immediately," and the Los Angeles Times reports that his administration is considering more subtle ways to eliminate DACA, including a lawsuit filed by states or a Department of Justice review.

Vargas' willingness to share her family's experience with ICE was a bold, especially in a state that voted for Trump by nearly 17 percentage points over Clinton and at a time when anti-immigrant policies are on the rise. And it was perhaps a risky choice as well.

Almost immediately after speaking at the news conference and sharing her family's experience with ICE raids, Vargas was arrested by ICE agents herself. In a habeas petition filed March 6, Vargas' attorney alleged that she was arrested "in retaliation for her constitutionally protected freedom of speech." ICE released a statement in response that "U.S. Immigration and Customs Enforcement (ICE) took Daniela Vargas, 22, an unlawfully present Argentinian citizen, into custody March 1, during a targeted immigration enforcement action in Jackson, Mississippi."

At the time of her arrest, Vargas, whose DACA status had expired, was applying to regain her status. Immigration officials knew this when they arrested her father and brother, according to Vargas' attorneys, but although her DACA application status remained unchanged, Vargas was arrested only after speaking out.

Her attorneys don't think this is a coincidence.

"Their first encounter with her, they knew that her DACA had expired, they knew her information," Peterson says of when ICE agents arrested her father and brother, the event that prompted Vargas to speak at that news conference. "So knowing all of that, they still did not take her into custody. The only thing that was different [between the first encounter and Vargas' arrest] was that she has been in the news. So reasonable minds would conclude that that was the rationale behind that."

Much of the Trump campaign's anti-immigrant rhetoric centered around the idea of deporting potential criminals. Vargas, a straight-A high school student and taxpayer who reportedly dreams of becoming a math teacher, doesn't seem to fit that profile.

"She's not someone that they should be spending their resources on," Peterson says. "I'm sure that they know that, as well, and I would imagine the fact that they know that is largely the reason that she ended up being released, but she never should have been in detention."

Vargas's release from jail doesn't mean release from worry. There is "no certainty" about Vargas's future, Peterson says. As long as a removal order for her exists, she could theoretically be deported at any time.

Even if there are no further legal repercussions for Vargas, the detention has already potentially silenced DREAMers like her. If Vargas's arrest deters other immigrant children from speaking out, those stories may not get told at all.