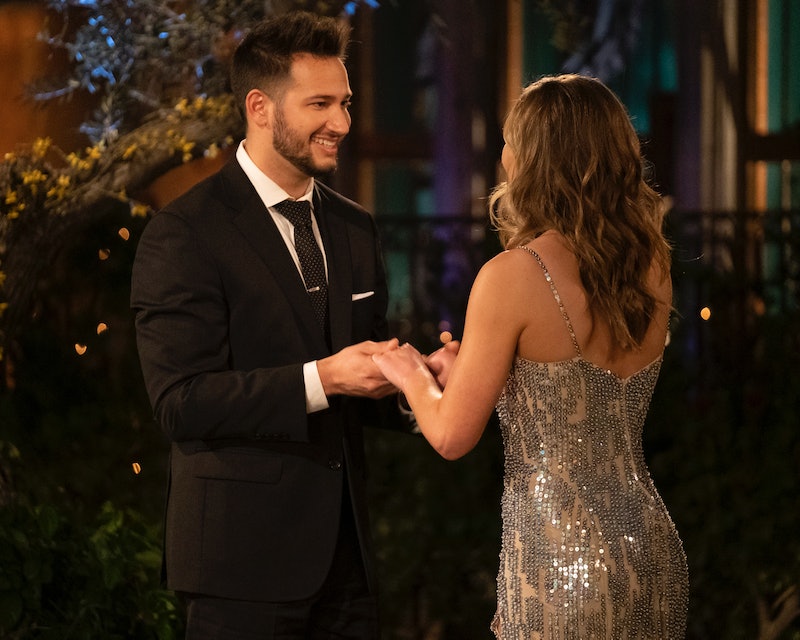 In case you missed it, Hannah's former Bachelor co-stars Demi and Katie were on deck at the mansion to spy on the contestants from a surveillance van. While there, Demi revealed that she'd received a tip on social media that Scott had someone waiting for him back home. She claimed to have read very recent messages between Scott's girlfriend and her friends in which they discussed that they were still going to be together and go on vacation after he was done on The Bachelorette. Naturally, she told Hannah, and as our Bachelorette was processing the news, Scott was hanging out inside with the rest of the guys saying that he could see himself marrying her. Oh, dear.

She immediately confronted him, and Hannah was not having it. "I knew you were nervous coming in today. It might be because you have a girlfriend." Oof. He initially denied it, but Hannah continued to press. "I've heard that you do have a girlfriend, and that you talked to her on Monday," she continued. "So I just want to understand why these things are being said about you, and exactly why you're here."

He started out pretty vague with his explanation — Scott said he "did date this girl," but he came to the show for Hannah. He did talk to the other woman on Monday, though, so this story seems fishy! Scott wasn't able to really explain the nature of his relationship with this person, and Hannah accused him of keeping a girlfriend back home in case things on The Bachelorette didn't work out.

Finally, he admitted that he was dating someone as recently as the Monday before he arrived at the mansion, but claimed the relationship was over, and seemed pretty exasperated that it would bother Hannah. "Do I think that this is someone long-term that I'm going to marry? No, I don't." That's pretty bananas, and unfair to the woman, especially since he would have applied to casting and been selected for the show much more than a week before filming began.

He even tried to turn the tables and compare him having a girlfriend to Hannah "dating" Colton recently on The Bachelorette. Dude, at some point, you need to just take your loss and walk away. Hannah called him a jerk (accurate) and said she was done. "There's no reason for you to be here if you're not serious, and it's time for you to head out." Hannah was pissed and she did not back down.

After giving Scott the boot, she invited any other men in the house who might be harboring ulterior motives to go ahead and leave, but none of them obliged. Hopefully this sets the precedent for the rest of the men that she's not going to tolerate people being dishonest, or screwing around with her the rest of the season. Reality TV is bound to have some contestants who are "there for the wrong reasons," but Scott was so blatantly disrespectful that it was a little staggering. Hannah doesn't deserve that, and neither do the other genuinely good guys whose time was stolen away.

Here's hoping that the rest of the season goes a little more smoothly, even though there's bound to be more bumps in the road.