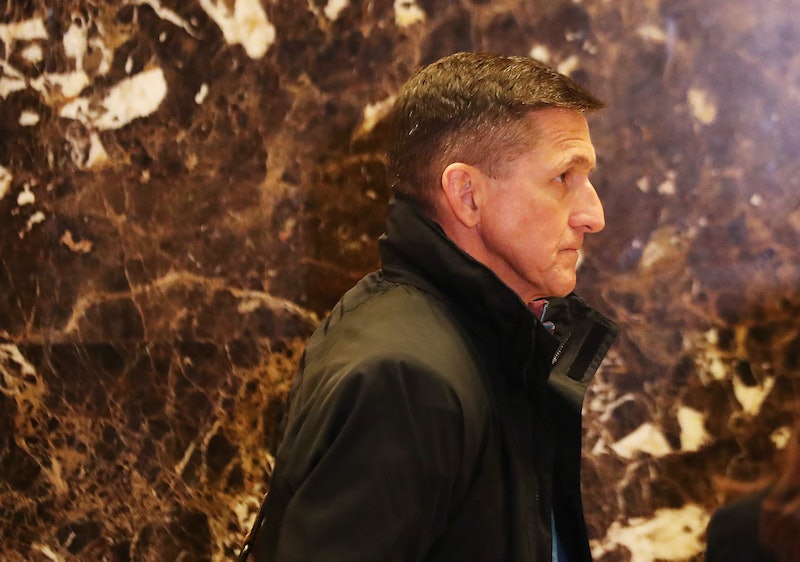 We're not yet one month into Donald Trump's presidency, yet already one of his top staff members has become embroiled in allegations and quit. If you caught the news on Monday evening, you may be wondering: Why did Michael Flynn resign as National Security Advisor?

There are a lot of elements to this story, and not all of them are confirmed. What it broadly comes down to is a series of conversations Flynn had with the Russian ambassador prior to Trump's inauguration, and more broadly, connections that Flynn may or may not have to the Russian government. Let's take it piece by piece.

After Trump won the election but before he took office, Flynn had two conversations with the Russian ambassador. This isn't in dispute — the White House acknowledged that the calls happened. Flynn made the phone calls the same day that the United States imposed sanctions on Russia for alleged interference in the U.S. elections. White House Press Secretary Sean Spicer told reporters that the only thing the two men discussed was the logistics of setting up a future phone call between Trump and Russian President Vladimir Putin. And on Monday, the same day Flynn resigned, the Kremlin denied allegations that Flynn and Russian Ambassador Sergey Kislyak had discussed lifting sanctions.

But on Feb. 9, the Washington Post claimed that during these calls, according to U.S. officials, Flynn and the ambassador discussed American sanctions against Russia. If true, that would be a major deal: Flynn was a private citizen at the time, and the Logan Act prohibits private citizens from engaging in diplomacy.

Initially, the White House had denied this. Vice President Mike Pence insisted that Flynn and the Russian ambassador "did not discuss anything having to do with the United States’ decision to expel diplomats or impose censure against Russia." And Flynn himself flatly said "no" on Feb. 8 when asked if he'd discussed sanctions with the ambassador. But a day later, Flynn backed away from this, with his spokesperson saying that, "while he had no recollection of discussing sanctions, he couldn’t be certain that the topic never came up."

Also on Monday, the Washington Post reported that in late January, the Justice Department had warned the White House that Flynn might be susceptible to blackmail by the Russian government. And although White House counselor Kellyanne Conway's claimed earlier in the day that Flynn had Trump's "full confidence," Flynn resigned Monday evening. CNN reported that in his resignation letter, Flynn wrote that he had "inadvertently briefed the Vice President-elect and others with incomplete information regarding my phonically with the Russian ambassador," and that he'd sincerely apologized to both Trump and Pence.