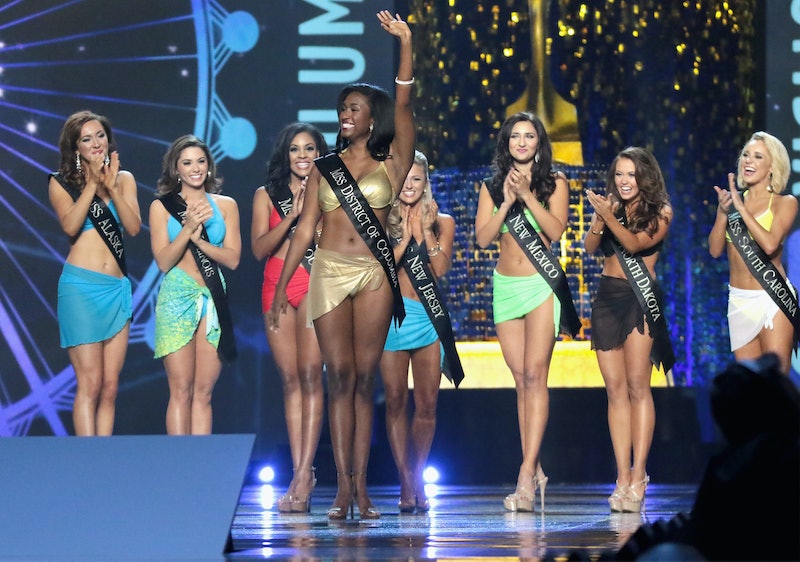 The first Miss America pageant was held on the boardwalk of Atlantic City in 1921, where it was made to keep tourists an extra day longer during their Labor Day weekend. But things have changed in the pageant since then, where most notably Miss America won't have a swimsuit competition any more.

This year, the women will no longer walk across the stage in swimsuits, mainly because the contestants will no longer be judged on their appearances.

Gretchen Carlson, the chairwoman of the Miss America board of directors, went on Good Morning America to share the news, and announced that the event will no longer be a pageant, but a competition.

"We will no longer judge our candidates on their outward physical appearance. That's huge," she said. "And that means we will no longer have a swimsuit competition, and that is official as of September 9 when we have our competition in Atlantic City."

She also mentioned they will be revamping their evening gown competition phase, where it will no longer be used as a way to judge women on how they look in their dresses, but will focus on what the contestants say during that time, instead.

"It's going to be what comes out of their mouth that we're interested in, when they talk about their social impact initiatives."

While Miss America is moving forward with this change, that does not mean Miss USA is following suit. The two, after all, are separate entities.

Carlson also said that she wants the competition to be more inclusive to women of all shapes and sizes, opening the doors to people who might not have believed they could participate thanks to the strict and narrow standards of the swimsuit portion.

In the past, when people would label the competition anti-feminist, the response back was that it offered participants scholarships and opportunities to get ahead in their education and careers. Now, with the program being restructured towards focusing more on the woman's mind rather than body, that mission rings more clear.

"At the end of the day, we hand out scholarships to these young women. Everyday when I travel this country I meet somebody who has participated in this program who benefited from those scholarships and became lawyers, and doctors, and members of Congress, and we want more women to know that they are welcome in this organization."

Carlson also mentioned that the foundation is now led by women, where not only is she the chairwoman, but roughly 80 percent of the board is made of women, and the new CEO is a woman. This, she says, has helped to usher in new change.

Back in the 1920s, there was no better hook to stay on the beach an extra afternoon than a line of beautiful women, especially if they were standing around in bikinis and waiting to be judged. It wasn't even a "pageant" at that time, but a simple swimsuit competition.

At first it was nothing more than a marketing scheme, where it helped seaside resorts book more rooms after the long Labor Day weekend, while simultaneously boosting newspaper circulations, thanks to the fact papers would run the women's pictures months ahead of time and ask readers to vote on which women would be able to go to New Jersey to compete.

Since then, that portion of the pageant has been called antiquated, misogynistic, and exploitative, where seeing women walk in stilettos in string bikinis no longer fit in with the times we were living in. While this complaint isn't anything new — people have been protesting it since 1968 — the pageant has come around and agreed with the public consensus.