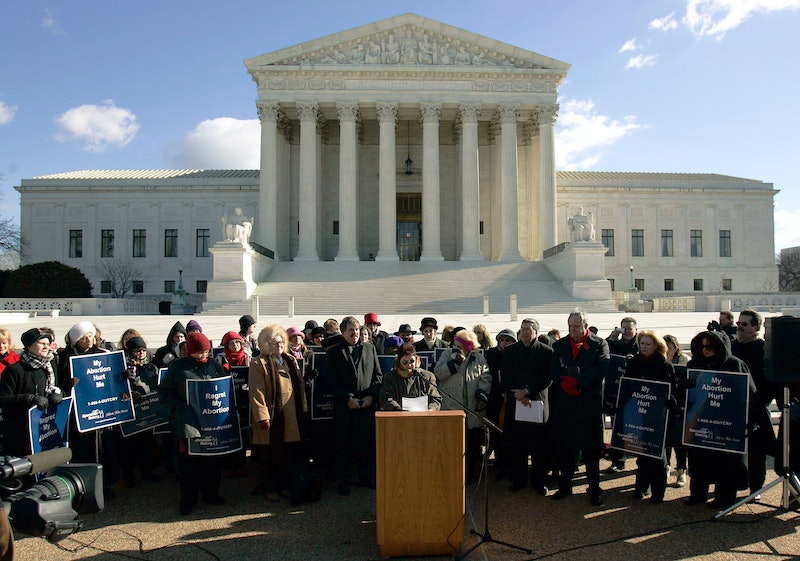 Norma McCorvey, better known as "Jane Roe" from the landmark Supreme Court Case Roe v. Wade, passed away today at age 69. McCorvey was an enigmatic person, to say the least — she went from the plaintiff in the famous court case that established a constitutional right to abortion to a fervent opponent of the very same ruling. Although she was known as Jane Roe for many years during and after her court case, McCorvey later went public with her identity. Why did Norma Jane McCorvey go by "Jane Roe" in the first place? The answer is actually pretty understandable.

McCorvey brought her abortion case to court in Texas in 1970 when she was 22 years old. At the time, Texas law prohibited abortion unless the mother's life was in jeopardy. McCorvey did not set out to become an activist when she initially brought her case to court — she simply wanted to terminate her pregnancy. Given those circumstances — and given the fact that McCorvey could not legally obtain an abortion at the time — it makes sense that she would want to protect her identity. She went by the pseudonym "Jane Roe." This has to do with the fact that "John Doe" and "Jane Doe" (the former being male, the latter being female) are placeholder names used to designate a person whose identity is unknown; the pseudonymous surnames "Roe" and "Poe" are also used to identify parties in lawsuits who wish to remain anonymous.

Although it is commonly believed that McCorvey initially wished to live in anonymity following the outcome of Roe v. Wade, a Vanity Fair piece asserts that claim is false. McCorvey publicly identified herself four days after the verdict when she spoke to the Nashville-based Baptist Press; a follow-up story for the Associated Press ran the next day with the headline "Abortion Reformer Sheds 'Jane Roe.'" However, although her true identity may have not been a secret, McCorvey led a relatively private life in the years immediately following Roe v. Wade. It wasn't until a decade later that McCorvey began lending her name to activist causes.

McCorvey became more public with her identity in the 1980s and wrote a book, I Am Roe, which was originally published in 1994. McCorvey attended women's marches and worked in abortion clinics, but her views changed in 1995, when she struck up a correspondence with the head of an anti-abortion clinic that had moved in next door to the abortion clinic at which she worked. After being baptized in 1995, McCorvey became an anti-abortion activist and dedicated her life to reversing Roe v. Wade.

Although she published two memoirs, much about McCorvey's life remains a mystery. Even after shedding the "Jane Roe" pseudonym, McCorvey remained an enigmatic and controversial figure.

More like this
Supreme Court Overturns Roe v. Wade
By Melanie Mignucci
The “Beatrice Six” Were Awarded $28 Million After Their Wrongful Convictions
By Brad Witter
It Took Investigators 23 Years To Correctly Identify Helen Wilson's Real Killer
By Brad Witter
Yinka Bokinni Recalls Terrifying Truth At Heart Of 'How To Hire A Hitman'
By Frances Stewart
Get Even More From Bustle — Sign Up For The Newsletter