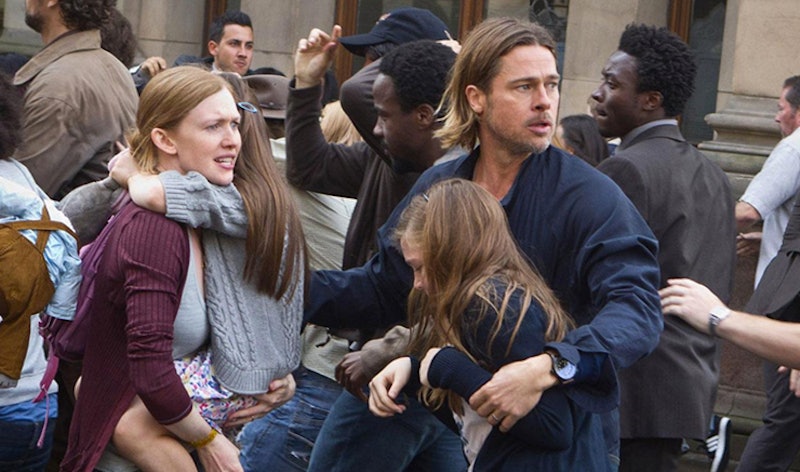 Things are looking grim for the sequel to World War Z, whose release date was pulled from the Paramount Pictures 2017 release schedule late Monday afternoon, according to Variety. Bustle has reached out to reps for Paramount, Brad Pitt, and Skydance Pictures for comment, but did not hear back in time for publication. The announcement has come quite suddenly, but it would appear in line with the beleaguered production of the sequel to a film which was itself a beleaguered production. It would appear that, as of the time this is being reported, the sequel to World War Z could be shelved indefinitely. This, in short, is not good for the film, starring Pitt.

But what exactly happened to warrant the World War Z sequel's 2017 release date getting nixed is still a bit up in the air. The move is uncommon, especially from a big studio who has the time and opportunity to simply move the release date back rather than nix a project altogether. It is interesting to note that rather than try and salvage the sequel's release by scheduling in later than the original June 9 date yet keep it on the 2017 calendar. According to The Hollywood Reporter, Paramount is considering moving it to 2018 or 2019. As The Hollywood Reporter notes, it is commonplace for studios to schedule their big tentpoles ahead of time, but this kind of hubbub so close to a planned release date is rather unexpected.

The vagueness of this entire schedule change is worrisome, especially for fans of the first World War Z installment. The 2013 zombie flick, wherein Brad Pitt fights off the undead while traveling around the world for a cure, has an infamously troubled production. Initial trouble arose around finding a director for the film and then, the film underwent last-minute re-writes and re-shoots that only caused more headaches, according to The Hollywood Reporter. Luckily for the film, it was a genuine hit, grossing more than $540 million worldwide.

This rollercoaster that the World War Z franchise has found itself on is, one might argue, less than ideal. There's no doubting that the material is exciting enough to warrant a sequel and big box office returns. If only Paramount could find a way to renew their faith in the sequel by giving it a concrete release date.