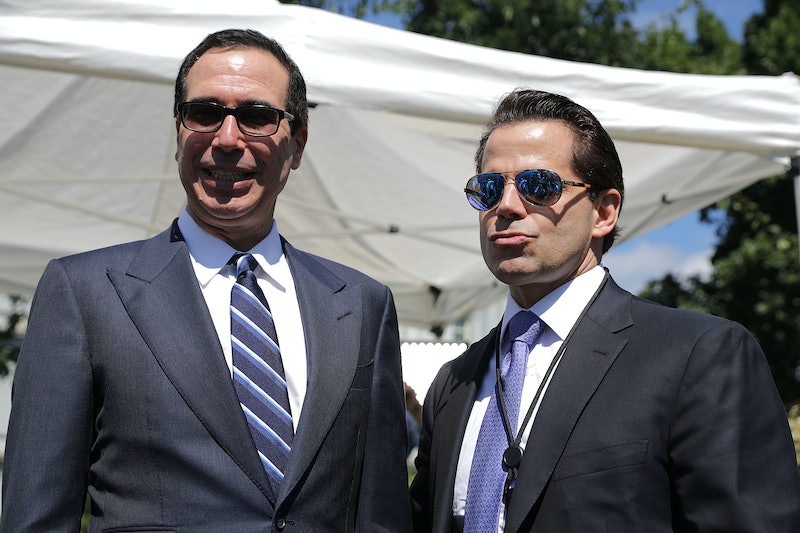 According to the New York Times, on Monday, President Donald Trump fired Anthony Scaramucci, his new communications director who had only been appointed 10 days ago, at the request of Trump's new chief of staff, John Kelly.

During his brief stint as White House communications director, Scaramucci, a high-rolling New York financier and hedge fund salesman, became notorious for his candid style. “The swamp will not defeat him,” he told New Yorker writer Ryan Lizza, referring to himself in the third person. “They’re trying to resist me, but it’s not going to work. I’ve done nothing wrong on my financial disclosures, so they’re going to have to go fuck themselves.”

Determined to prevent leaks, Scaramucci told D.C. reporters that he planned to fire any White House staffers who defied his order to stop giving private information to the press. “If they don’t stop leaking, I’m going to put them out on Pennsylvania Avenue — it’s a very clear thing,” he told reporters, according to the Washington Post. “You want to sell postcards to the tourists outside the gate or you want to work in the West Wing? What do you want to do? If you want to work in the West Wing, you’ve got to stop leaking.”

Another favorite target of Scaramucci's was recently ousted Chief of Staff Reince Priebus. “Reince is a fucking paranoid schizophrenic, a paranoiac,” he told The New Yorker. It is ironic, certainly, that Scaramucci's own firing may have been caused by the fall of Priebus, his main White House foe. The appointment of John Kelly, the no-nonsense Department of Homeland Security secretary and a retired Marine general, was the catalyst for Scaramucci's own ouster, according to the Times.

"[Kelly] strongly believes in discipline and a strong chain command," President Bill Clinton's chief of staff, Leon Panetta, said of Kelly, who was his military aide, in an interview with Politico. "He has little tolerance for chaos and people who don't follow orders." A few days ago, when Politico asked one person close to Kelly if the new chief of staff and the bombastic Scaramucci shared any traits or could find common ground, that person said: “They’re both Catholic, but that’s probably about it.”

Scaramucci's style irked other Republican leaders too. "He's off the map. For him to use the kind of vulgar language he used with respect to Reince Priebus and Steve Bannon — both conservatives and liberals in the White House — I just don't get why Donald Trump would put him, Mr. Scaramucci, into that position, given his rather reckless style," Alabama Rep. Mo Brooks told CNN.