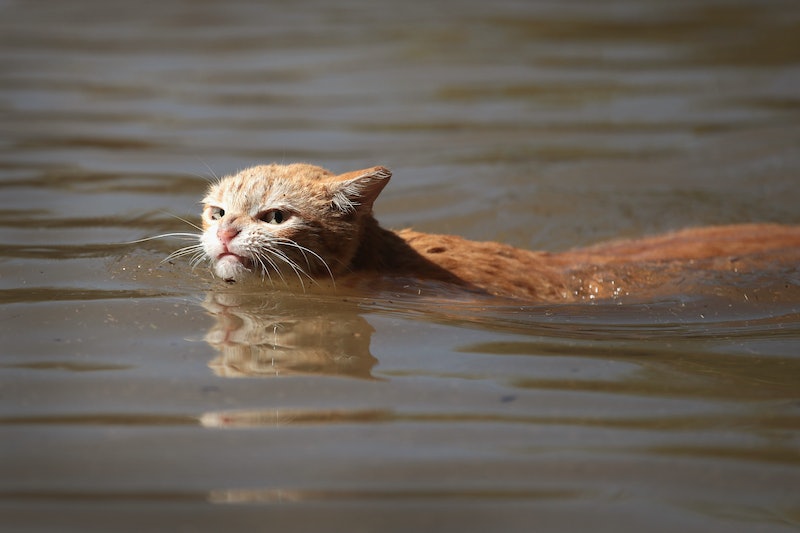 Any cohabitating companion of a feline knows that, in addition to their considerable charms and quirks, the fur babies can’t stand water; or, more to the point, they hate being wet. I had a Maine Coon kiddo once whose favorite pastime was to either drink water directly from the faucet, or to delicately dip his front paw into the running stream, and wash his ears and head with it — like, we're talking drenched kitty face. But fully immerse him in a body of water for bath time? The howls of rage and betrayal could be heard for miles. But why do cats hate water so much?

According to Catster, cats are aquaphobic because it’s in their DNA. Ingrid Johnson, CCBC (Certified Cat Behavioral Consultant) told the kitty-centric publication that, since cats most likely domesticated themselves about 9,500 years ago, the arid environment in which they evolved didn’t predispose them to jumping in the pool for a swim. And while some of their distant relatives, like tigers and sometimes lions, enjoy a dip from time to time, Felis catus, or the domesticated cat, pretty much hates it. “Some individual cats may be curious about water, but historically they evolved in a dry, arid environment,” Johnson told Catster. Johnson went on to say that “in 19 years of working with cats, I haven’t seen one that swims.” And despite the fact that YouTube is flooded with adorable would-be kitty swimming champions, as endearing and hilarious as they may be, they are more the exception to the rule, according to Johnson.

Marilyn Krieger, CCBC and author of Naughty No More! also told Catster that some breeds, like Maine Coons, Turkish Vans, and Turkish Angoras, may enjoy a splashy romp in the bathroom sink a bit more than most cat breeds do. “My cats like water,” Krieger told Catster, “and they are Bengals and Savannahs. They have a water faucet they can turn on and off themselves. Sometimes I find them sitting in the middle of a stream or lying in the sink with water cascading over them.” Be still my kitty-lovin' heart.

But Catster also reports that unlike most dog breeds, cats aren’t really physically built to like water. Johnson notes that “many dogs’ coats repel water, but cats’ coats hold water, which brings down their body temperature.” Waterlogged and chilly does not a happy kitty make.

But what about those swimming kitty YouTube sensations, you may ask? Well, according to Krieger, it is possible to acclimate a feline to water, but the process needs to start “when they’re kittens. Gradually acclimate them to the feel of the water on their fur, on their paws, and finally their whole bodies. It’s important the process is done slowly and consistently in a way that’s not stressful for the kitten,” Krieger explained.

Before you rush off to buy your kitten some millennial pink swimming goggles, however, remember that cats do have some good reasons for their notorious water aversion, and those reasons are pretty complex and sophisticated in an evolutionary sense. Mother Nature Network explains that being wet is not pleasant for cats for a variety of reasons. In addition to the body temperature drop and heavy wet coat thing, “cats have numerous scent glands that produce pheromones used for marking and communication, and water — especially scented bathwater and chemical-laden tap water — can interfere with this,” Mother Nature Network reports.

PetMD notes that while cats may enjoy water they can control, like a running stream from the sink faucet or tub, total immersion — and a loss of control over their water exposure — will likely cause a fear reaction. Dr. Katy Nelson, a medical advisor for PetMD, and veterinarian at the Belle Haven Animal Medical Centre in Washington D.C., notes that cats are “usually pretty finicky about their own appearance, and about controlling their own situations.” So rather than completely hating water, kitty water aversion is a lot about loss of control. “When it’s their idea, they’re probably a big fan of it,” Nelson explains. “But if you’re looking for someone to go swimming with you, get a Lab.”