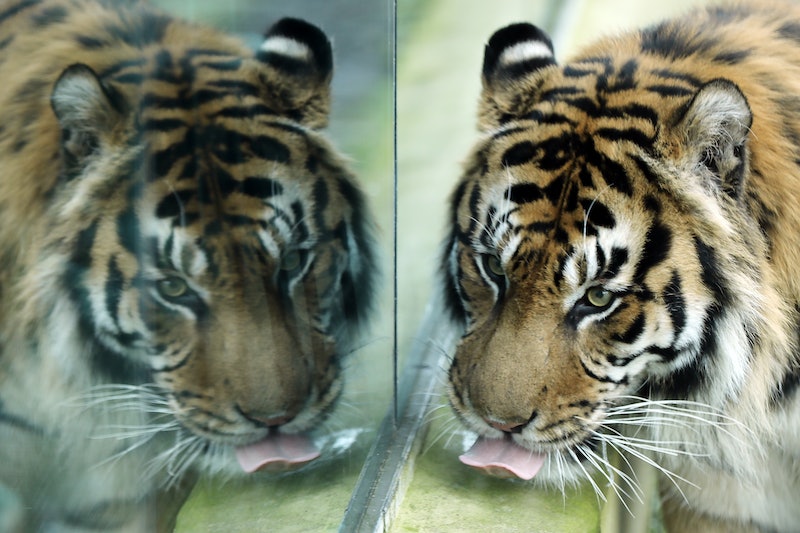 Cats always choose to clean themselves at really opportune times — when you're giving your date a tour of your apartment, or having an awkward conversation with your parents, they'll decide it's the best possible moment to sit with their leg in the air and lick their nethers. Loudly. Why do cats lick themselves? For cleaning of course, but the mechanism by which that works has long been a mystery. Now a new study published in PNAS has shown that cat tongues are unique — and that their powers are pretty spectacular.

The scientists behind the study looked at six different species of cat: the common domestic cat, bobcats, snow leopards, cougars, tigers and lions. They collected tongues from specimens and examined them closely, and also observed cat licking behavior with high-speed film. They discovered why cat tongues don't feel soft and gentle when they happen to lick you with curiosity: all cat varieties, it seems, share a particular kind of spiked tongue surface that helps keep them clean.

Cats, like humans, have small growths all over their tongues called papillae. Unlike humans, though, cat papillae turn out to be pointy, hollow half-pipes with U-shaped tips, shaped like cones. "The papillae of these cats each feature a hollow cavity at the tip that spontaneously wicks saliva from the mouth and then releases it onto hairs," the study explained. All the cats studied had these pointed cones on their tongues, and it seems that the papillae have a big role in keeping cats clean.

Unlike dogs, who need baths regularly, cats are famously self-cleaning, and the new study explains how their hygiene regime is achieved. "The papillae wick saliva deep into recesses of the fur, and the flexible base of the papilla permits hairs to be easily removed from the tongue," the scientists explain in the study. Cats are distributing their cleansing saliva into their fur in a really efficient way because they basically have water-distributing combs in their mouths, and that's an excellent way to keep clean.

The slow-motion videos they took of cats cleaning also revealed that cats actually "flare" their tongues so that the papillae stand perpendicular over their fur. "This motion helps maximize how much fur each papilla can reach," reported Science. It's also likely the source of the trademark bluck-bluck-bluck noise that cats make when they're intensely interested in licking themselves in the middle of the floor.

The scientists who conducted the study took their discovery a step further and created a 3D-printed brush that replicates cat papillae. It might possibly be used by vets as a way to distribute medicines onto cat skin, using their own technique. Sneaky!

However, licking isn't just a hygiene activity; it's a social one. Particularly in wild cats who live in groups or families, like lions, the act of grooming others cements bonds, which is why cats may also try to lick their owners. Interestingly, a study of lions in 2013 found that licking for social reasons primarily occurred between lionesses, but that doesn't appear to be the case in domestic cats. A 2003 study discovered that in household felines, there are no real gender elements to social licking; male cats in particular can form strong friendships with lots of grooming.

Normal grooming behavior doesn't mean that a cat is dirty; it's a standard part of their attitude to their bodies, and is healthy (and, with that fancy tongue, efficient). If you notice your cat's doing a lot of grooming and see bare patches appearing in their fur, that might be a sign of an over-grooming issue, caused by allergies, fleas or anxiety, and it's necessary to take your cat to a vet.

More like this
The 4 Best No-Scratch Sprays For Cats
By Masha Vapnitchnaia
The 8 Best Collars For Cats Who Hate Collars, According To A Vet
By Lauren Moison
The 4 Best Food Bowls For Dogs With No Teeth, According To Experts
By Maria Cassano
This Wi-Fi-Enabled Pet Feeder & Camera Gave Me Peace Of Mind On An Overnight Trip
By Danielle Calma
Get Even More From Bustle — Sign Up For The Newsletter