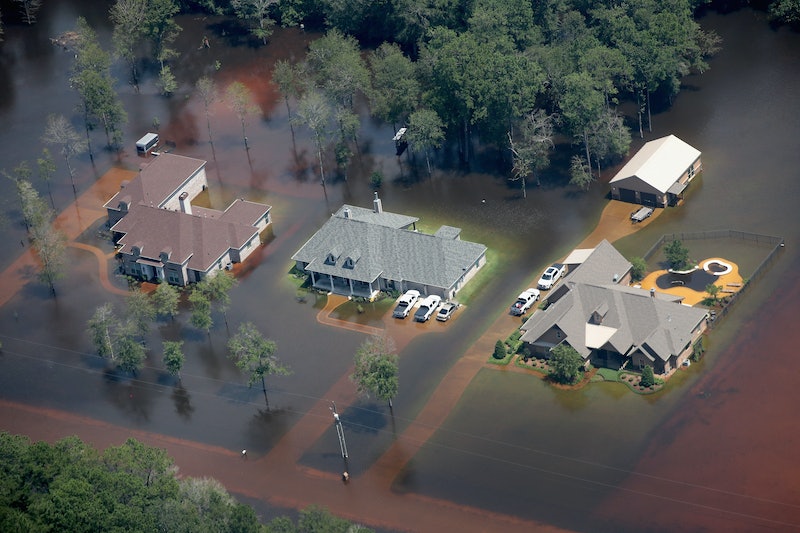 Hurricane Harvey — now a tropical depression — dumped an extraordinary amount of downpour in less than a week on the Houston area. Its death toll has climbed to at least 44, and rescue teams are still sifting through flood and debris for missing persons. Now, in the aftermath of Harvey's worst, people are questioning why hurricanes cause flash and mass flooding and how the it could get so bad in Houston.

First off, the "natural" part of the disaster: Meteorologists upgrade tropical storms to hurricane status when their winds reach 74 mph. Along with strong winds, hurricanes are all capable of producing torrential rainfall and storm surge, the rising of sea caused by wind and atmospheric pressure. The heavy rain is a result of the hurricane forcing the warm, moist air near the ocean surface upward. While flooding can be inevitable, the hurricanes alone do not determine the extent of the damage.

Houston is particularly susceptible to flooding because the city lies flat, which makes draining the water back out to sea a slow and difficult process. In an interview with Popular Science, Bob Holmes, National Flood Hazard coordinator with the Unites States Geological Survey, said to think of a major interstate down to one lane at rush hour. Similarly, Houston's floodwater must empty out through a small channel.

Man-made issues like ecologically unsound policy and urban sprawl only make matters worse. Unchecked urbanization and a boom of people flocking to the Houston area over the years has caused low-density residential development over rural land. Local officials, rejecting stricter building regulations in favor of short-term economic gains, allowed developers to pave over acres of prairie land that are crucial for absorbing large amounts of rainwater. As concrete can't absorb water, that excess floodwater ends up overwhelming the city's bayou network, drainage systems, and two reservoirs. ProPublica and The Texas Tribune pointed out these issues in an extensive 2016 report on Houston's vulnerability to flooding.

Some have asked why people didn't evacuate Houston sooner if they knew a hurricane was coming, but before judging those who stayed behind, consider two things: the city's already tragic history with evacuations and storm warnings. In 2005's Hurricane Rita, an estimated 2.5 million people attempted to make their exit from Houston at the same time, leading to gridlock traffic and more than 100 deaths. In comparison, storm casualties at the time amounted to less than 10.

Harvey had escalated to a Category 4 hurricane just four hours before it hit the Gulf Coast on Friday, Aug. 22. While flooding was expected, perhaps not everyone was aware of how destructive it would be. The enormous flood damage and resulting human suffering caused by Hurricane Harvey is a terrible tragedy. Critics of Houston's flood preparation say it didn't have to happen this way, and better policies plus government intervention can help mitigate future hurricane disasters.