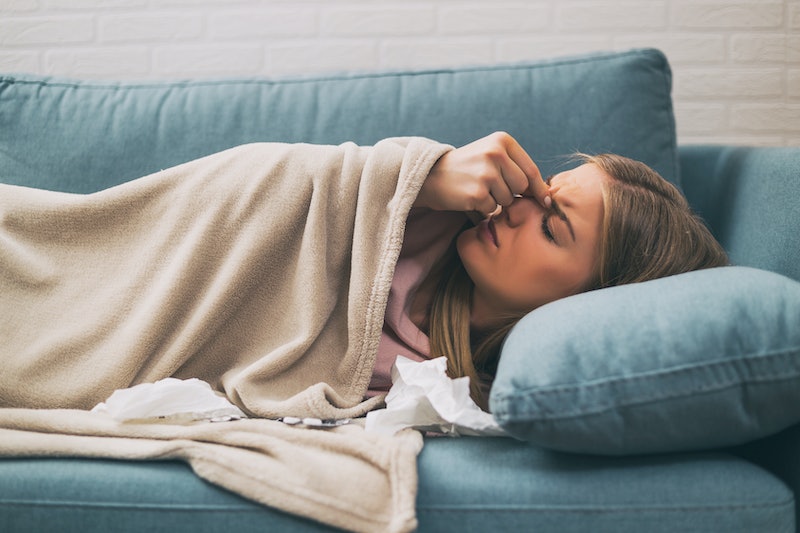 Migraines are a highly unpleasant experience in about fifteen different ways. Migraines are the third most common illness in the world, behind tooth cavities and tension headaches, and affect about 14.7 percent of the world's population, according to the Migraine Trust. And a huge number of migraineurs are women, for reasons that still remain obscure but are thought to be linked to hormones. For such a common disorder, though, they're still surprisingly mysterious. But a new theory poses a new suggestion for why we get migraines at all: There may, according to this research, be a good evolutionary reason for migraines to exist, even though they're incredibly miserable to go through.

The tendency to get migraines is at least partially genetic. If somebody closely related to you suffers from migraines, your risk of having them increases three-fold, according to neurology professor Jonathan H. Smith, writing for the American Headache Society. Because of this, a lot of work has been done on trying to find the "migraine gene," to see how it's being handed down through the generations. Migraines, it turns out, are pretty complicated — tracking them in the brain has revealed that they cause changes in blood flow and electrical activity, and make the brain stem light up like a Christmas tree.

And migraines get no less complicated when you look at their genetics. At least 12 genetic "loci" (locations of specific genes on chromosomes) have been shown to have strong relationships with migraines; if you look at those loci on a person who has migraines, chances are they're going to tell a very specific story.

The genetics of migraines are where this new evolutionary theory comes from. Scientists from the Max Planck Institute for Evolutionary Anthropology started poking around a previous discovery: that people with a specific variation on a gene called TRPM8 were more prone to getting migraines. But there's something else odd about TRPM8. It's designed to help humans cope with cold temperatures; it's part of how we "read" from our skin and other cells that temperatures are freezing and we should head indoors and get a hot chocolate.

Here's the part that gets into evolution. The "migraine variation" of TRPM8 doesn't just give headaches; it also helps people who have it deal with colder temperatures really well, making it an asset when you're trying to survive in, say, Greenland or Russia. The genetic benefits of a good cold detector are a big deal, and migraines might just be a nasty side-effect of what's otherwise a pretty helpful gene variation. The scientists checked their idea out, and got proof: people whose ancestors were from cold latitudes were far more likely to have the "migraine variation" than people from hot countries. According to a press release about the study's publication, 88 percent of people with Finnish ancestors have the variation, compared to 5 percent with Nigerian ancestry.

It's possible that early humans living in climates with extremely cold temperatures likely found this gene to be very helpful. The migraines may have been a literal pain in the neck, but being able to survive and thrive in freezing temperatures was apparently worth a little agony. Why this gene *also* happens to cause migraines is still up in the air, but having an understanding of the connection is a good first step to figuring it out.

So if you're prone to flattening migraines and have ancestors who specialized in ice fishing and skiing across frozen tundra, genetics say it's their fault. Sorry about that — but it may mean you'll cope better with an ice skating trip in sub-zero temperatures than your friends.