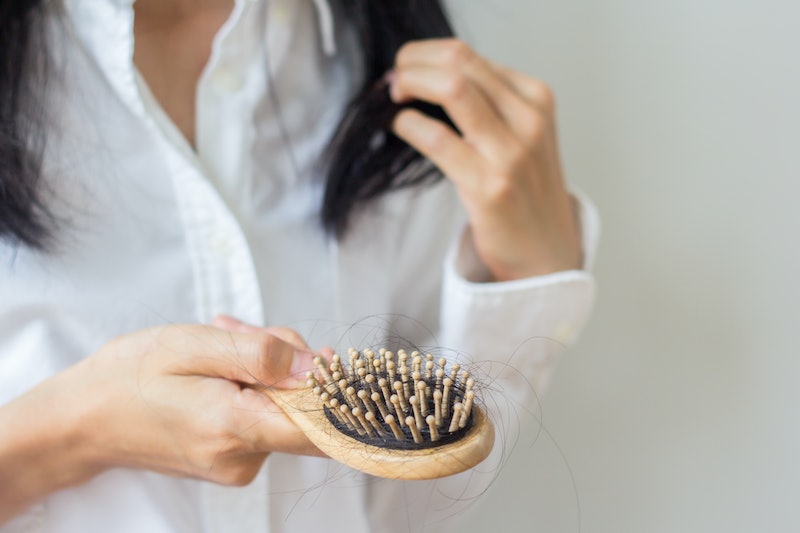 Nothing ruins a nice, hot shower like a clump of hair slithering down your leg as you rinse out your shampoo. Twenty minutes later, you're six pages deep into a Web MD spiral as you research the causes of unexpected hair loss. As it turns out, though, seasonal hair loss is actually normal in the summer and late fall. It might be a bit unsettling to look at your brush and see enough hair for a year's supply of Donald Trump's toupees, but some extra shedding in the months leading up to winter is no cause for panic. So rejoice! Barring some other medical condition, you probably aren't balding after all.

According to Dr. Angela Phipps, D.O., A.B.H.R.S., and Medical Advisor to Hair Club, hair shedding is totally normal. "One may lose anywhere from 50 to 100 strands of hair per day. New strands of hair, which have an average life cycle of two to six years, replace those that we lose daily. Each hair follicle produces a new hair, which then grows in successive cycles before falling out," she tells Bustle.

The life cycle of a hair is divided into three phases: anagen, catagen and telogen. Here's what happens at each stage, according to Phipps.

Researchers have suspected for a few decades that people shed more at certain times of the year, and several small studies have suggested that hair grows thicker in the spring and starts to thin in the fall. It was only recently that researchers set out to see if these findings apply to everyone. In a study from Johns Hopkins and Washington University, scientists looked at Google Trends data from eight different English-speaking countries across the world between 2004 and 2016, focusing on terms related to "hair loss." Clearly, as much as scientists warn us against using the Internet to diagnose ourselves (because that way lies madness and cancer scares), they also know everyone does it anyway.

Comparing search data from month to month and season to season, they found that searches for hair loss followed a cycle. People searched for "hair loss" the most often in summer, followed by fall. It was the least common in the spring, suggesting that people's hair was thickest in March, April, and May.

By the end of summer and beginning of fall, though, telogen hair loss — the phase of when your hair stops growing and falls out — is in full swing. Interestingly enough, temperature was associated with hair loss searches, but it only appeared to have a small influence.

While more research is needed to explain why people lose hair in the summer, but the authors of the study have some ideas. One of the co-authors pointed out to TIME Health that in terms of evolution, hair (and fur) provides warmth, which is "less necessary during the summer months." Therefore, it's possible that humans evolved to grow more hair throughout the winter, when it can act as a blanket against the miserable cold, and shed it in the summer, when you don't need it in the sweltering heat.

Phipps agrees. "Some research suggests that women may experience slightly higher rates of telogen during the summer month of July, [where] one then sees the affected hairs falling out around three to four months later in mid-October or November. Exactly why this happens is unclear, but some suggest that stress brought on by the summer heat may have a factor," she explains.

This has been seen in other animals, too, so humans are in good company. "What is also interesting is that seasonal variations in hair loss also occurs in animals and has been noted in studies with rhesus monkeys, cats, and dogs. In particular, seasonal flank alopecia has been described in dogs," Dr. Shawn Kwatra told Medical News Today.

As far as human hair loss goes, though, hair shedding is pretty normal. According to the American Academy of Dermatologists, most people lose between 50 and 100 hairs each day, and stressors like giving birth, losing large amounts of weight, undergoing surgery, and so on can accelerate the amount you shed. Once that stress goes away, the hair tends to return to normal.

Baldness is often considered the realm of middle-aged men or people with alopecia, but most women can expect to experience some sort of hair loss as they age. One dermatologist told Allure that 50 percent of women will begin losing hair by the time they're 50 years old.

That being said, spotting some extra strands in your hairbrush doesn't mean you're balding at this very minute, especially if it's during the summer or fall. However, if you're interested in learning how to prevent seasonal hair loss, Phipps has some tips for you.

This post was originally published on Nov 1, 2017. It was updated and republished on June 25, 2019. Additional reporting by Sara Tan.

More like this
Florence Pugh’s Flipped Bob Is Giving ’60s Bombshell
By Olivia Rose Ferreiro
Not Sure How To Style Bangs? Make These Easy Hairstyles Your Go-To
By Olivia Rose Ferreiro
This Week’s New Makeup Releases & More Beauty Headlines
By Audrey Noble
7 Hair Color Trends Of 2023 That'll Inspire Your Next Dye Job
By Jordan Murray
Get Even More From Bustle — Sign Up For The Newsletter