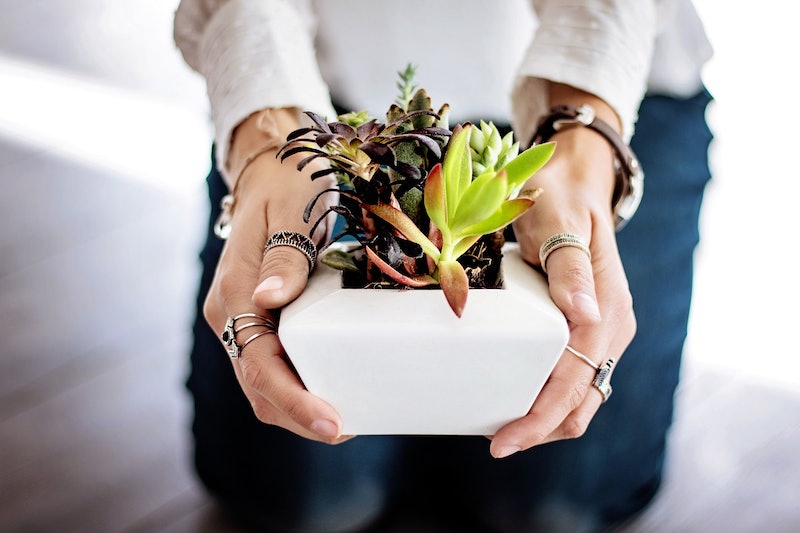 I have two dogs and a cat share with an ex, but I cannot keep a plant alive. My planticide aside, houseplants are all the rage with millennials, but why do millennials love plants? The history of houseplants might surprise you. Apparently, millennials are tending to plants to satisfying their need to nurture. And, while it might be the latest millennial obsession, immigrant communities have long grown plants for reasons entirely different reasons.

"My Japanese-American great-grandparents were farmers in California," artist and researcher Justine Lai told Cosmopolitan. "Gardening was one of the few available job opportunities and formed the basis of those early immigrant communities. So learning about plants also means learning about people and gaining historical perspective."

Whether you want to grow plants to educate yourself about cultures different from your own, you're interested in growing your own food, or you simply want to learn how to take care of a living thing, there are plenty of benefits to cultivating this practice. "Being around thriving plants boosts your mood, and having fresh vegetables around makes it easier to eat well," Camille Richman, co-founder of plant subscription service HAMAMA, said in a press release. This is something immigrants have known for generations.

"My parents had a garden, and my aunts and uncles gardened,” Sweena Varghese, who grew up in the New Hyde Park neighborhood on Long Island, told Newsday. "Coming from India, they appreciated the value of getting something they grew with their own hands — and getting fruits and vegetables they couldn’t find at the market."

If you're the grim reaper of gardening like me, but you want to experience growing your own food, proper plant care is something you can learn, and millions of millennials are interested.

A 2016 National Gardening Survey found that of the 6 million people who took up gardening in 2015, 5 million of them were millennials, many of whom have an overwhelming desire to know where their food comes from. Additionally, millennials — many of whom are delaying becoming parents, or deciding not to have kids — also see tending to plants as a way nurture a living thing. And, before you dismiss that idea as millennial nonsense, don't forget that taking care of plants is harder than you might think.

Jazmine Hughes detailed her first attempt at plant ownership as a foray into true adulting in a recent New York Times column. And her experience sounds pretty similar to my own plant growing woes. Hughes bought a rubber tree — which she named Michelle Obama — after a break up.

"Two months later, I had killed Michelle because of some combination of root rot (as per the Brooklyn Botanic Garden help hotline), overwatering (guessed my grandmother) and (in hindsight) a subconscious desire to redirect all the effort I had put into my relationship toward this plant," Hughes wrote for the Times. Afterwards, Hughes says, "a friend asked me to care for a pothos while he was traveling. He dropped it off at my apartment, I hung it in front of a sheer window curtain and then mostly forgot about it."

Because plants don't talk, at least not in a language you can hear, it's easy to forget to feed and water them in a way you wouldn't with a dog or cat. Growing strong healthy plants worthy of names like Michelle Obama takes an incredible amount of commitment.

Or, you could grow superfoods that are impossible to kill. HAMAMA, the plant subscription service, makes a kind of seed quilt that doesn't need water, and barely any sun, making it so that you can grow your own superfoods right in your apartment. The company wants to make it easier for you to get started gardening by making it easy to, you know, not kill your plants. While this is not going to help you learn to take care of something, it will give you fresh food even when you neglect it, which hardly seems fair. Eventually, you might get to where Varghese, who grew up growing plants with her family, is at. As a mom, sharing her gardening experiences with her kids is an important part of her family, Newsday reported.

"My kids love it,” Varghese told Newsday. “They eat the vegetables I make, and they pick the berries and eat them.”

If you have no plant tending experience, then a subscription service makes a lot of sense. You might also want to get another plant that is dependent on you so you can learn while you enjoy the bounty of your HAMAMA seeds. As Hughes said in the Times, it's nice to come home to something that depends on you when traditional "adult" milestones, like a living wage and home ownership, feel out of reach.

"A plant, then, is fertile ground to act out the trial and error inherent to emerging adulthood, a low-risk investment in discovering the type of person you are: It feels safe and permissible to try out authority and ownership on a being that it’s legal to kill," she wrote.

Plant-parenting really all depends on what your goals are. While I have immense appreciation for plants, and gladly accepted the bounty from my grandparents' garden for years, I am also very aware of my limitations. Seeds that don't need any water or sun are likely as far as I'll go with trying to green my thumb.