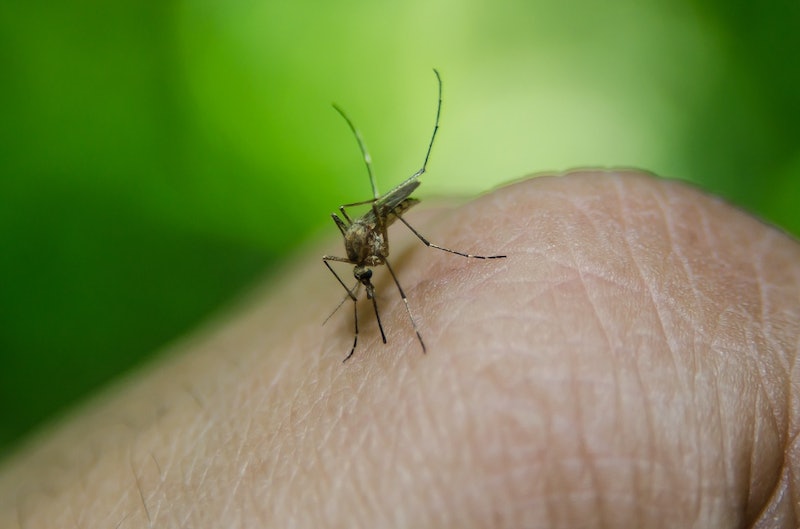 So, you're at an outdoor summer party, and you're being eaten alive by mosquitoes, but your bestie isn't. This hardly seems fair. Why are you a mosquito magnet while your friend seems to be able to don a cloak of invisibility? Why mosquitos like some people more than others is something scientists are exploring to better understand the laws of attraction between the insects and their human prey. While many of us love being the object of desire, this is one popularity contest no one wants to win.

Little is known about what makes one person an attractive mosquito meal and another person persona non grata. In order to get to the bottom of this, British researchers are launching a study to uncover the role genetics may play mosquito attraction.

The Scientific American reported that part of the study involves collecting smelly socks from 200 sets of identical and fraternal twins, and placing the footwear in a wind tunnel with the bugs and see what happens next.

Smelly socks? Sometimes being a scientist sounds like a couple of 5 year olds playing make believe. Researchers are hoping that the bodies of the owners of said socks will naturally produce attractive or repellant chemicals that could become the basis for future mosquito control efforts.

Are Smelly Feet The Future Of Mosquito Control?

The study will include 100 twins each from the U.K. and Gambia, and researchers plan to analyze clothing mosquitos zone in on for both the odor compounds in them, and the genetics of their owners, according to the Scientific American.

"We hope this study will give us more insights into the mechanisms that help change our body odors to make us more or less attractive to mosquitos,” James Logan, a medical entomologist at the London School of Hygiene and Tropical Medicine who is leading the effort, told the Scientific American. “If we can identify important genes, perhaps we could develop a pill or medication that would allow the body to produce natural repellents to keep mosquitoes away."

OK, studying smelly sock in order to develop a pill to repel mosquitos. Is it too late for me to become a scientist? I'd love to have been a fly on the wall when this idea was pitched for funding. Scientists already know that people who expel more carbon dioxide are popular targets for mosquitos, but with so many odors to examine, pinpointing the exact allure is challenging.

"There's a tremendous amount of research being conducted on what compounds and odors people exude that might be attractive to mosquitoes," says Joe Conlon, Ph.D, technical advisor to the American Mosquito Control Association, told WebMD. With 400 different compounds to examine, it's an extremely laborious process."

Maybe they can invent a pair of smelly socks you can put on when you plan to visit mosquito infested areas.

What Makes You Attractive To Mosquitos?

WebMD reported that genetics play a role in up to 85 percent of your likelihood of being a target for mosquitos, though other factors are involved in the pesky vampires choosing you for their next meal. One in 10 people are considered extremely attractive to mosquitos, and, they can smell you from as far as 50 meters away.

"People with high concentrations of steroids or cholesterol on their skin surface attract mosquitoes," Jerry Butler, PhD, professor emeritus at the University of Florida, told WebMD.

Unraveling the exact compound the bugs find so alluring is a long and complex process. Scientists are targeting odor-linked genes, but the research will take years. And, since mosquitos have inhabited the earth for more than 170 million years, and can be separated into 175 species in the United States alone, I think it's safe to say that they pretty much have the upper hand.

How To Keep The Vampires Away

Because we don't know exactly what mosquitos like, it might be easier to focus on what they dislike so you can make sure you're not a target at the next backyard barbecue.

The Farmer's Almanac suggests these natural remedies if you want to keep the bloodsuckers at bay: Rubbing lemon eucalyptus oil, baby oil, imitation vanilla extract, or apple cider vinegar on your skin. And, if you ingest enough apple cider vinegar by putting it on foods you eat, you’ll develop a body odor that will repel insects.

They also suggest rubbing garlic on your skin, similarly to how you would ward off vampires, but if you want any people to hang around with you, I'd skip that one (unless actual vampires are a real concern).