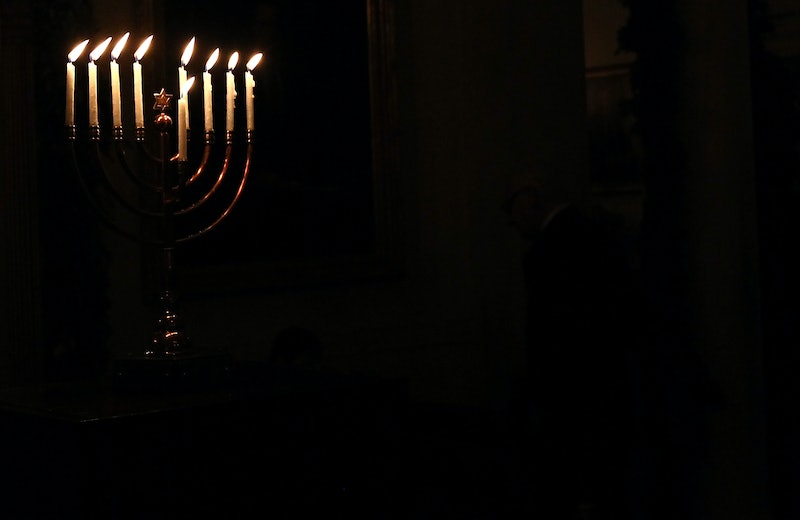 You say potato, I say latke. You know — the delicious potato pancake that nestles itself onto plates for eight nights of the year in December, usually during lively Hanukkah celebrations and dreidel games. However, considering latkes are so delicious, it's worth wondering why this food is generally reserved for the celebration of Hanukkah rather than, you know, every day. So, why do people eat latkes during Hanukkah? (And in my family's personal case, only Hanukkah?!) Well, there's actually a ton of history behind it.

It doesn't matter how you pronounce the starchy vegetable dish (potato, potAHto?), because it matters most how the dish is mashed, hashed, or frenched onto your plate year-round. But on Hanukkah, one occasion of the year's bulging holiday calendar, there's only one way to eat them — and that would be in the form of a potato pancake. And if you're wondering why this is and you haven't been to a temple service in a while — or ever — I have a little history refresher-slash-lesson for you that'll make your mother verklempt. Or, you know, impress your Jewish boyfriend's chorus of aunts (I'm speaking from experience here) at your first Hanukkah dinner.

OK, so, let's get started. In short, latkes are generally consumed on Hanukkah to commemorate the miracle of the oil lasting eight days in the story of the event Hanukkah comemorates, the rededication of the Holy Temple. The oil lasting eight days in this story is also why we have eight candles to light on a menorah. The Nickelodeon Rugrats Hanukkah special did a great job telling the story of why we celebrate these eight days (DON'T DENY THIS IS TRUE), but if you have lost all memories from its 1996 airdate, I'll do my best to relay a recap as to the part oil plays in this celebration.

Hanukkah, as a holiday, celebrates rededication to the Jewish identity after it was compromised by oppressors in 168 B.C.E. The burning of the oil (the eternal light) for eight days by those who were escaping the oppressors is considered a miracle, because it seemed there was only enough oil that could burn for a single day in the Temple. To celebrate the life of that ancient oil in modern celebrations of the holiday, we devour oil soaked dishes.

The latkes, as we know them, are potato-based pancakes constructed of salt, onions, eggs, and spices of the chef's choice. They're fried in what seems like inches of oil — or sometimes even straight-up animal-rendered fat — until golden and crisp, and it feels as if beads of grease are oozing from your pores. In a good way. They are a delight and hands down my favorite holiday-specific treat.

If you want to see these pancakes year round on plates — they're perfect for every meal of the day and then some snacks — What Jew Wanna Eat has an assortment of spruced up latke recipes to try out. For this coming Hanukkah holiday and beyond, of course.

Now that I'm an adult, I can cook latkes whenever I want them to appear on my plate whether it's in December or July. But I have to be honest and admit that there's nothing like my grandmother's oil-soaked version. That's the kind of latke I only get to chow down on and reflect over once a year. And the lot of them should be cherished and will continue to be consumed through generations.

Now that you know why latkes are such a big deal — historically and flavor-wise — I hope you have a nice holiday with family and maybe even win a few rounds of dreidel.

More like this
25 Quotes About Love To Share During Pride Month 2022
By Madeleine Aggeler and Emma Garza
Are We Drinking Rosé All Wrong?
By Sheila Yasmin Marikar
TikTok's Favorite Bartender Thinks Mimosas & Bloody Marys Are Out For Brunch
By Alexis Morillo
Here’s What Sarah Jessica Parker’s Canned Cosmo *Actually* Tastes Like
By Emma Garza
Get Even More From Bustle — Sign Up For The Newsletter