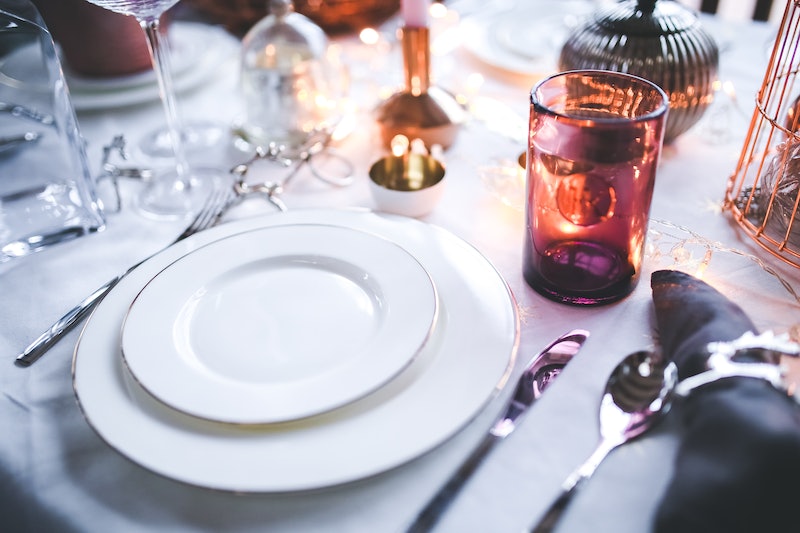 They call it Thanksgiving dinner, but on the holiday, families dive in fork first around lunch time. You might have been invited to a friend's feast and been confused when the "dinner" bell rang before 6 p.m. So, why do people eat so early on Thanksgiving? And, more importantly, do you still have to wait until 8 p.m. to devour the contents of the dessert table? If this practice seems strange to you there is actually historical context as to why people confuse dinner with lunch on Thanksgiving.

The good news about eating early is that you can get a head start on your leftover sandwiches, which you will most likely be eating for dinner. Other than that, you also have more time in the day to cater to your tryptophan induced napping. On the flip side, however, instead of a post dinner dinner snooze fest on the couch, you can just guzzle dessert and retreat to your room to sleep, for eight hours, and wake up to a leftover breakfast sandwich.

We all have our own traditions that make sense to us. And really nobody can take away how you and your family have been defining dinner time on Thanksgiving for your whole life. Whether you're new to the idea or curious as to why turkey is being carved before the first football game is over, there is reason behind the madness.

For starters, it might be because that's how they did it in the olden days. When I say olden days, I mean Medieval times. Dinner was consumed at, shockingly, 10 a.m. But who are we to judge? The term "dinner" had a different meaning. It was more like our modern day lunch. Supper was what people way, way long ago ate as their day-ending meal. That was promptly consumed before the sun went down, at 3 p.m. If you're eating around 3 p.m., it would make sense that this is happening because the sun is still up, and that's how the folks used to do it in Medieval England.

While the historical context makes sense and intellectualizes the reasoning behind a gravy lunch, there are more modern points that have been brought to light. Apartment Therapy suggests that eating while the sun is still up compliments the flow of the day. Thanksgiving usually means a lot of traffic. Not just on the road, but also in your kitchen and living room and dining room. Sitting down for an earlier dinner allows for guests to arrive earlier, sit down for the meal without a long intermission between arrival and dinner, and allow time for the feast to settle in their system before making their way back home. It also allots a lot of time and people for dish duty shifts. Just saying.

Another reason could be because of the football games. Some passionate fans might miss part of the game when they're ushered to their placemats. Eating early allows fans the chance to share what they're grateful for before socially acceptably retiring to the couch with a slice of pecan pie to catch all the plays of the game.

When it comes to Thanksgiving dinner there must be method to the madness. If that means racing the sun and smothering your mashed potatoes in gravy, so be it. At the end of the day, you're still getting quality time with your family. You're still sharing why you're grateful for each other around the dining table. And maybe most importantly, you get to eat your dessert and leftovers too all before bed time. Maybe eating before the typically scheduled dinner time isn't such a bad idea after all.