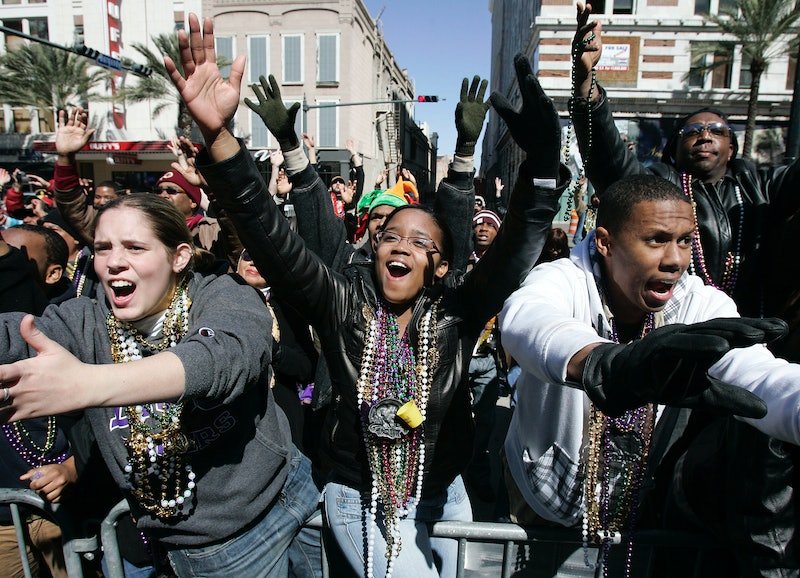 If you're anything like me, you've probably always wondered how the tradition of throwing beads at Mardi Gras came to be. I mean, it's cool — but how did that even become a thing? Well, turns out, you're not crazy to wonder: The real reason why people throw beads at Mardi Gras (as well as why many flash their breasts for beads) has never been intuitively clear. And which came first, the flashing or the bead throwing? If you stop to think about the specifics of Mardi Gras and try to really break it down, there's a whole lot of ritual and tradition that we don't have obvious answers for. And while from afar the whole thing might seem a tad random, it's all rooted in something. All of the identifiable aspects of the celebration have some sort of meaning, be it symbolic or superficial — everything has a story. So let's get to the bottom of it, shall we?

While there are no official documents that prove once and for all where the beads came from and why they were chosen, it's said that the tradition of bead throwing dates back all the way to the 1880s. The legend says that a man who was dressed up as Santa Claus tossed strands of glass beads into the crowds. They were such a hit, that people would fight for them — perhaps what inspired nearly a century later the need to win them over with a flash of skin. The original beads were glass and colorful and gorgeous, so you can see why people were desperate to get their hands on them. They weren't the same silly looking costume-like pieces we have today. Getting your hands on some beads was getting your hands on some new jewelry.

But the legend also suggests that the exchange of trinkets for a sight of flesh was not meant to be pornographic or exploitative, rather the whole celebration is meant to be a communal lifting of sexual taboo and light-hearted fun. So, it's not so much about flashing as it is about being carefree. You know, Mardi Gras, aka Fat Tuesday is the last hoorah for Christians who are about to observe Lent. It's kind of like how suburban kids go out the night before Thanksgiving and party way too hard in anticipation of being stuck with their parents for a whole weekend — except, Mardi Gras is much more interesting and culturally and historically rooted, of course.

In the '70s and '80s aluminum and plastic beads became ubiquitous at Mardi Gras parades. Logically we can assume it's because they're cheaper, easier to mass produce and less likely to injure someone when thrown from a moving vehicle. Despite the fact that a Mardi Gras parade might look like a giant free-for-all, there are actually safety regulations and guidelines for what is and is not permitted! And, it was in the '80s that woman really began to bare their breasts as part of the bead-collecting tradition. And to this day, breast-bearing for beads is most definitely still a thing, because hey, #freethenipple, women should be proud of their bodies so long as they feel safe and free-willed!

More like this
13 Summer Solstice Quotes To Celebrate The Longest Day Of The Year
By Sadie Trombetta
The Summer Solstice Spiritual Meaning, Explained
By Jessica Booth and Brittany Beringer
18 Father's Day Poems That'll Make You & Your Dad Tear Up
By Michelle Regalado and Siena Gagliano
Bella Hadid Just Wore Y2K-Inspired Pacifier Earrings
By Natalia Perez-Gonzalez
Get Even More From Bustle — Sign Up For The Newsletter