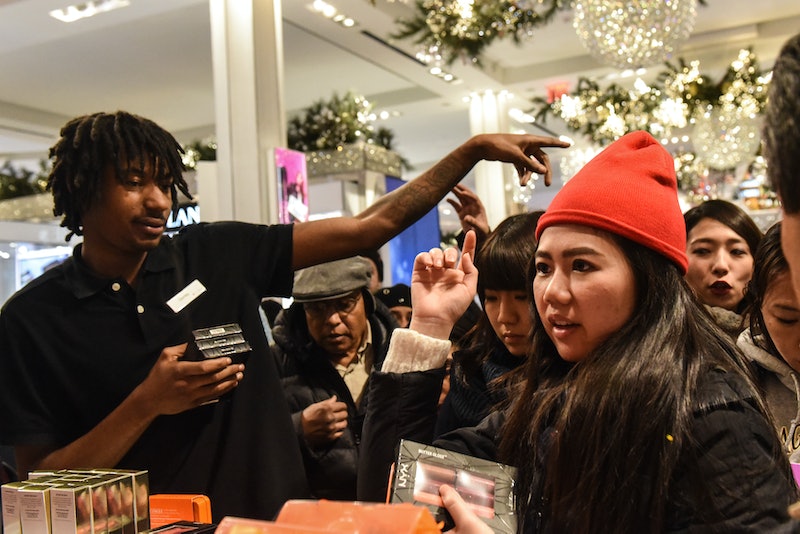 With the holiday season in full swing, you may find yourself hunting for bargains while you shop for friends and family. A lot of people get a rush when they find a good deal on an item they really wanted, but there is now evidence that bargain shopping does come with a downside you probably didn’t even realize. A new study found that people treat retail workers worse when they're looking for bargains than if they were less price conscious, and it's information we should all know as we shop.

The University of British Columbia (UBC) Sauder School of Business study, which was published in the Journal of Consumer Psychology, looked at several factors to determine how customers treated employees. One variable researchers examined was the words customers used when speaking to customer service workers, and they found that customers at the discount airline Ryanair used fewer humanizing trait words than those who were flying Lufthansa.

People flying Ryanair are theoretically more price-conscious than those flying Lufthansa, and researchers believe that plays a big part in how they treat the people who are hired to help them. "When shoppers focus only on paying the lowest price, they become less attuned to understanding the human needs of others, or even recognizing them," Johannes Boegershausen, a UBC Sauder PhD student who co-authored the study, said in a press release.

"We simply varied the brand, and found that people ascribed lower capabilities for experiencing emotions and feelings to the Ryanair flight attendant," said Boegershausen. This experiment revealed participants unconscious bias, but another experiment showed that bargain shoppers were more harsh with rude customer service representatives than non-bargain shoppers.

Study participants interacted in a live chat with a rude customer service worker and were given the opportunity to choose a punishment. Bargain shoppers were 18 percent more likely to give a rating that led to disciplinary action than those who weren’t price conscious.

Being rude to employees and seeing them as less human doesn’t just make you seem like a jerk; it can also have serious consequences for the employees themselves. A 2014 study found that customers’ behavior has an impact on employees' “stress, emotional labor, and emotional exhaustion,” which can lead to higher employee turnover.

The findings of this study can be applied to other industries like retail and hospitality. Chains like Walmart and Target are experiencing growth and dissatisfied employees can and will impact the companies negatively.

So what can you do if you’re guilty of this behavior? Boegershausen reflects on her own actions as a consumer and offers advice: "I think most consumers, myself included, are guilty of this at some point. When you really drill down, you don't really recognize that someone is fully human anymore. But it doesn't take much to be human and to let others know you recognize them as human. Everyone has the right to be considered human."

The first step in changing a behavior is identifying it, so be aware of how you’re treating store clerks this holiday season. Be sure to be patient even if you’re in a hurry, trying to finish up last minute shopping and score some deals. Employees are just as human as you and deserve to be treated with kindness and respect, regardless of what uniform they’re wearing.