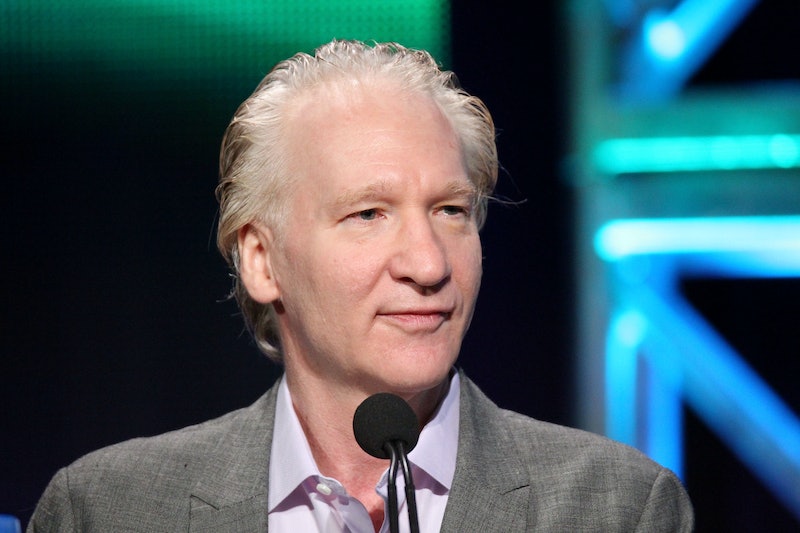 Many are calling for HBO show host Bill Maher's firing after he used the n-word during an interview with Nebraska Sen. Ben Sasse on Friday. The comment came during an exchange about the Halloween dress-up habits of adults in America — a topic relevant to the book Sasse was promoting titled The Vanishing American Adult — with Maher specifically asking if adults in Nebraska dress up for Halloween as much as those in California.

Sasse responded with, "It's frowned upon. We don't do that quite as much." Evidently liking the answer, Maher then joked about having to visit the senator's state more often. "You're welcome," said Sasse. "We'd love to have you work in the fields with us." And here came Maher's racially charged comment: "Work in the fields? Senator, I'm a house n*gger."

The host's name immediately began trending on Twitter after his comments were aired live. Prominent civil rights activist Deray McKesson promptly condemned Maher's words on Twitter and stated that they warranted his termination. "But really, @BillMaher has got to go," McKesson wrote. "There are no explanations that make this acceptable." He continued, "And why did the audience think it was okay to laugh? And Ben Sasse doesn't even flinch. What is happening in the world?"

Maher's remark is historically rooted in the distinction between "house slaves" and "field slaves" in the United States; as explained by Allison Samuels in Newsweek, "house slaves" were frequently the products of the rape of female slaves by their white male masters and therefore often had lighter skin than "field slaves." While the more physically grueling labor like picking cotton and farming was forced upon "field slaves," "house slaves" were charged with domestic duties such as cooking and cleaning.

As the backlash against Maher spread on social media, many pointed out that Friday's incident was far from being the first time the host made inflammatory comments about a minority group. Maher has a long record of lashing out against the Muslim religion and generalizing those who practice it. "Talk to women who have ever dated an Arab man," he once said on his show. "The reviews are not good." He has also been frequently criticized for making misogynistic comments — he notably referred to Sarah Palin as a "tw*t," "c*nt," and bimbo leading up to the 2012 election — and for criticizing feminism. Transphobia and homophobia are among the list of charges previously made against Maher as well.

The late-night show host was not alone in getting heat following the Friday night interview. Sen. Sasse, who didn't respond to Maher's racially-charged remark on air but who didn't denounce it either, also found himself facing backlash for his lack of a reaction. He took to Twitter on Monday in an attempt to rectify the situation, writing:

"Am walking off a redeye from LAX. 3 reflections on @billmaher. 1. I’m a 1st Amendment absolutist. Comedians get latitude to cross hard lines. 2. But free speech comes with a responsibility to speak up when folks use that word. Me just cringing last night wasn’t good enough. 3. Here’s what I wish I’d been quick enough to say in the moment: 'Hold up, why would you think it’s OK to use that word? The history of the n-word is an attack on universal human dignity. It’s therefore an attack on the American Creed. Don't use it.'”

Maher has yet to respond to the controversy.