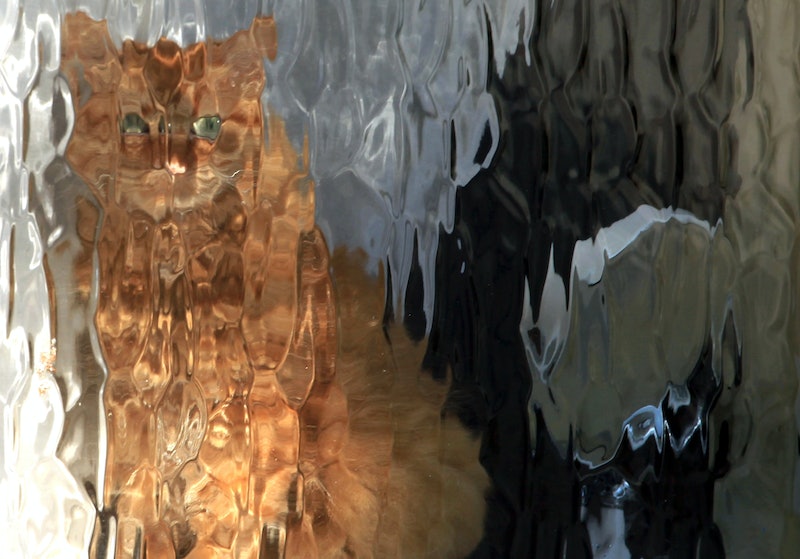 Anyone who has owned a dog or cat will at some point ask a crucial question: why on Earth do pets follow you into the bathroom while you're trying to beat that last level in Candy Crush? My own elderly cat won't bother to check on you if you've left the door open, but if you dare shut the door, she yodels until you open it again, and then patrols the entire bathroom to make sure you haven't been getting into shenanigans. This behavior can seem totally ridiculous, but pet behaviorists actually say it's pretty easy to unpack.

When it comes to dogs, the answer, according to experts, has to do with pack behavior. Dogs have evolved to be pack animals with strong bonds to those around them, and in their domesticated state, the instinct to physically stick with the members of the pack transfers to their humans. Animal Channel explains that following you into the bathroom is a symptom of pack behavior; the dog is expressing loyalty and togetherness, and dogs, like their wolf ancestors, haven't been bred to understand the idea of "privacy." Dogs are also curious; they're asking, what is the human doing in there?! But there are other explanations, too, and they're slightly less cute.

Following you everywhere all day may also be a sign of insecurity, which is not a healthy dog behavior. A dog that can't feel safe alone might develop separation anxiety whenever you have to leave it on its own or with others. It could also indicate that the dog thinks you need guarding 24/7, even when taking your ablutions — an attitude that often shows up in dogs' relationships with children. That might seem like a charming bit of protectiveness, but excessive guarding in dogs isn't healthy. Dog trainer Kimberley Mandel writes that "resource guarding" — when a dog restricts access to a person, place, toy, food or something else they think is "important," using aggression or force — can become dangerous. "Low level guarding is often treatable," she writes. "Insecure dogs are more likely to guard, because they are reacting to a fear of losing something of value to them."

On the flip side, cats aren't pack animals, so the explanation for their presence in your bathroom is slightly different. Occasionally, they're just following warmth — particularly those cats that curl up on discarded underpants or towels as soon as they're accessible. But there's another reason that's slightly more sinister.

"The various cat species tend to be solitary creatures," writes veterinarian Dr. Marty Becker for Vet Street. "Their mothers teach kittens or cubs all they can about hunting, hiding and surviving, and then send them on their way." For cats, then, their own privacy is paramount — hence why they need litter boxes placed just so — but yours isn't. Why? They need to know what's going on in their environment.

Felines are territorial animals, writes Dr. Becker. "Cats always want to know what’s going on in their territory, and they probably want to make sure you don’t do anything that might attract predators." Vet Dr. Kathryn Pimm, writing for I Heart Cats, notes, "Your home is your cat’s territory and the bathroom is within the boundary of his sphere of influence. How dare you shut him away from his own territory?" she says. "You might be hoarding resources or making friends with other cats. He can only know if he checks." In other words, if you're detecting a different attitude between your dogs and cats in their bathroom intrusions, you're correct. The dogs want to know you're OK and be wherever you are; the cats resent the closed door and want to check that nothing untoward is going on in their house.

What isn't so clear is how you could persuade these furry invaders to keep out of your space. While dogs are more easily convinced that bathrooms are no-go zones through training, it's tougher to convince cats that a space technically within their territorial area is off-limits, or that they can't have full access to it all the time. If it's becoming truly aggravating, you might want to talk to your vet or a behavioral specialist, who can suggest ways to get your cat comfortable with closed doors.

More like this
8 Money Saving Experts To Follow For Accessible Advice
By Maxine Harrison
This AI Filter Shows How You’d Look In Different Time Periods
By Alexis Morillo
If You Have Pets, You Probably Don't Realize You're Making These Common Mistakes
By Mackenzie Edwards
Here's How To Support Jewish People Amid Rising Antisemitism
By Hannah Orenstein
Get Even More From Bustle — Sign Up For The Newsletter