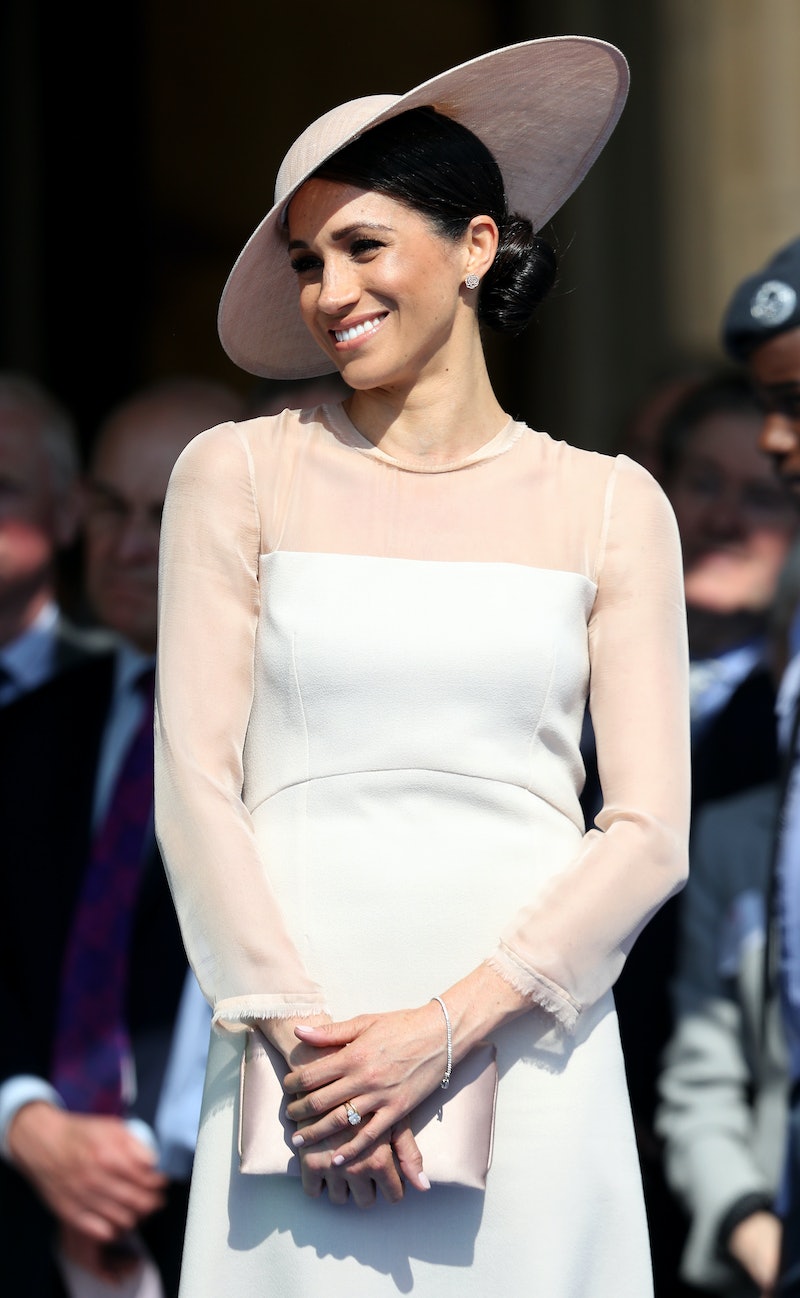 If you have been following Meghan Markle's fashion moves since she officially became part of the royal family, then you might have noticed that a lot of her outfits have been completed with a hat. Which probably made you wonder why do royals wear hats and fascinators all the time? While pillbox hats and fascinators were a daily staple in many women's wardrobes back in the mid-century, the style hasn't been as mandatory as it used to be as the decades have past. Now a person could decide whether they think a wide brim or jaunty hat would elevate their outfit, rather than having it be part of the regular and mandatory formula.

But when it comes to the royal family, the women seem to wear hats more than usual when compared to the rest of the general population. This becomes even more obvious when you take into account Markle's wardrobe before getting engaged to Prince Harry, where she had the same minimalist and timeless aesthetic, but usually walked around sans hat. Now it seems she is constantly steeping out in creative fascinators and angled, almost retro headpieces. So why the change?

It turns out it is part of royal protocol, and that protocol is inspired by the traditional rules that governed propriety back during the mid-century. Royal protocol says that women must wear hats to all formal royal occasions, an etiquette rule that dates back to the 1950s, when it was seen as improper for upper class and royal women to show their hair in public.

"Up until the 1950s ladies were very seldom seen without a hat as it was not considered 'the thing' for ladies to show their hair in public," Diana Mather, a senior tutor for The English Manner etiquette consultancy, tells BBC. "But all that has changed and hats are now reserved for more formal occasions." That explains why you will see both Kate Middleton and Markle wear hats for more special or formal occasions, but then wear their hair down and hat-less for smaller events.

Wearing a hat is also a kind of status symbol thanks to this rule, where you visually show that you are part of the elite and are abiding by the gentry's rules by putting on a cocktail hat to finish off your outfit. That and quality hats are hard to fake, which creates a classist line.

But a little less dark than that, hats aren't just a way for the royals to separate themselves from the masses they rule, or are only linked to an old fashioned etiquette rule they have to follow. Hats are also part of British culture and tradition, and a fun part of getting dressed to go to a special event.

"There has to be a hat, it's part of the social fabric," Hilary Alexander, fashion director at the Daily Telegraph newspaper, told ABC News. "For most people, the hat is quite serious and frivolous at the same time. It completes the outfit and it's a finishing touch."

But if you are a royal, there are rules to what kinds of hats you can choose with which outfits. Lisa Forde, a party etiquette expert, told Woman & Home, "If an A-Line skirt is selected, it is important to ensure that the hat’s brim width balances out the volume of the skirt. If the outfit is very tailored, a more simple hat will be selected.”

Whether it's a baptism, formal anniversary, or special royal event, you will see your favorite royals standing with jaunty hats on their heads. And while it might not be the norm in the United States, it sure is fun to see all the creative millinery the people across the pond come up with.