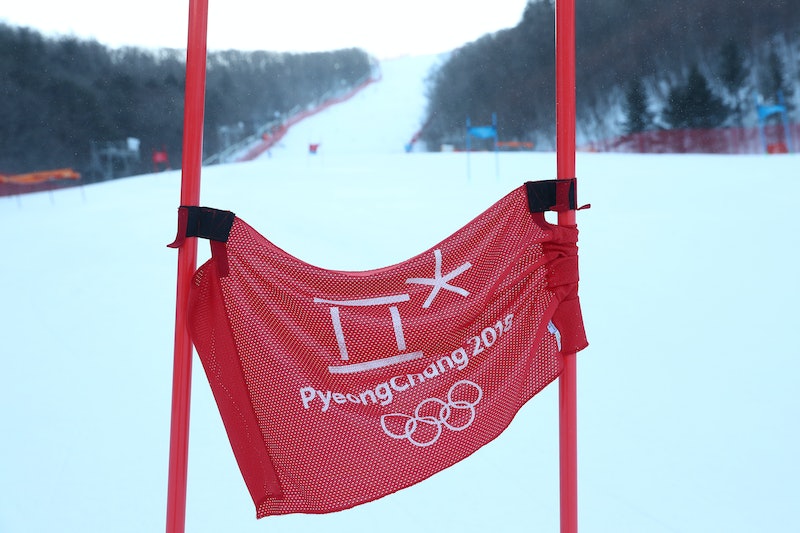 Alpine skiing is lighting up television sets all across the United States on Wednesday night, courtesy of the 2018 Winter Olympics in PyeongChang, South Korea. But if you're watching the various skiers tear down the slopes, you might be wondering: why do slalom skiers hit the gates? Do the rules of the event require them to do so, or is it some sort of strategy?

It's been a rough week for the start of the Olympic ski season. Dangerous and aggressive winds have already forced delays on multiple skiing events, and that's come at the cost of the skiers who've had their schedules disrupted, like American phenom Mikaela Shiffrin. But the weather looked picturesque when they finally hit the slopes on Thursday morning local time. So this go-around, skiers from all over the world were free to race down the track.

And if you're watching the action, there's something happening over and over again that you've probably noticed: skiers take turns so tight that they're basically running right through the inner halves of the gates, which are pairs of poles connected by flags that stud the course. Those tight turns are basically the hallmark of a quick, daring Olympic skiing run.

So, the big question, why? It's actually pretty simple, and it has nothing to do with there being a rule about having to tag them. Rather, hitting the gates lets skiers take the most direct route they can down each track, with the tightest, narrowest turns possible. The rule is that each skier must cross between each set of gates two gates on their way down the slope, and pushing through the inner-edge of the middle gate counts.

That's one of the reasons alpine skiers wear safety gear as they race, in addition to the risk of suffering an injury during a crash or fall. Shin guards, arm guards, gloves, and helmets with visors all help the skier push right through the gate with less fear of being hurt in the process.

In simple terms, that's why skier do it. The name of the game is getting to the bottom as quickly as possible, and the fastest way to do that is to clip the inner pole of the gate on the way down. Of course, this poses risks ― sometimes, alpine skiers do wipe out while doing it, and/or injure themselves in the process. But in order to be competitive in an Olympic race, there's no getting around it.

If you're excited to see who takes home the gold medal in alpine skiing, you'll want to tune into NBC's Olympic coverage on Wednesday night. At present, the second run of the women's giant slalom is scheduled to begin at 11:45 p.m. ET. on NBC, or 8:45 p.m. PT for any of you west coast viewers out there. It figures to be a dramatic event, with the 22-year-old Shiffrin vying for the first gold medal of her Olympic career.

The men's downhill ski is also being broadcast on Wednesday night, as well as speed skating, and the breathtakingly intense skeleton. In short, whatever your favorite Winter Olympic sport might be, there's a full slate of exciting events on the schedule.

As of this writing, Germany is leading the gold medal race with seven, compared to five for the Netherlands and four for the United States. Those three countries are also leading the overall medal count, with 12, 11, and seven respectively. The host country of the 2018 Winter Olympics, South Korea (competing as a unified team with North Korea) has currently secured just one gold medal, and two medals overall.