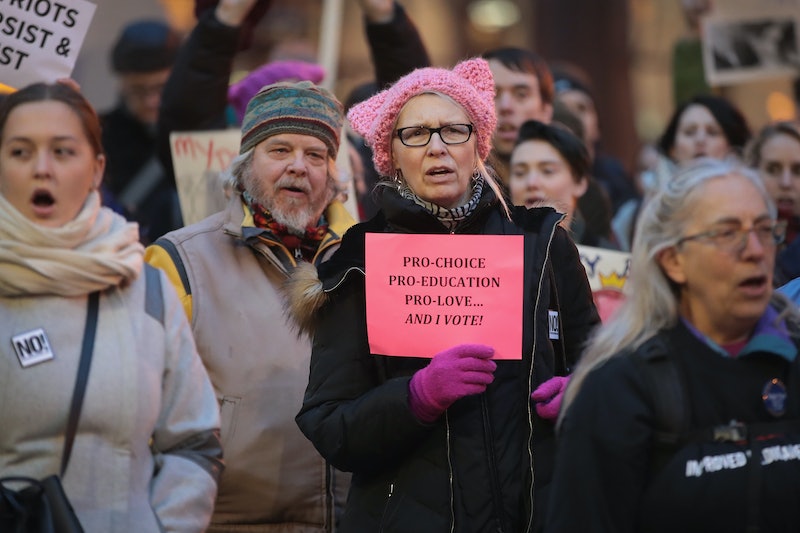 This year, International Women's Day will be especially important: The “A Day Without A Woman” strike will be held on the same day. The coinciding events will be in keeping with the powerful significance of the date — but why do we celebrate International Women’s Day on March 8 in the first place? International Women’s Day has been observed in some form for well over a century; however, its date has not always been consistent. What is now a day devoted to the continued fight for gender parity and global celebration of the achievements of women in society began as an important step towards unification in the fight for women’s rights and working rights in the industrialized age.

The roots of this special day devoted to action reach back to 1908, when 15,000 women took to the streets of New York City to march for voting rights, shorter hours, and fair pay. The rally, which took place on March 8, commemorated a similar protest held in 1857 by a group of courageous female garment workers, marching against poor working conditions and meager wages. The upcoming "A Day Without A Woman" strike will honor our foremothers as part of a long tradition of women's rights and working rights protests on March 8.

National Women’s Day was declared a holiday by the The Socialist Party of America in May of 1908. The party instructed that the day of protest should fall each year on the last Sunday in February. On Feb. 28, 1909 the first official National Women's Day was observed, months later the largest strike by women in U.S. history would take place among New York’s shirtwaist industry workers.

The idea of commemorating a day devoted to women and the fight for their demands spread internationally in 1910. During the second International Conference of Working Women, it was proposed and passed unanimously that on the same date each year, every country would honor an International Women's Day (although no specific date was determined in the meeting). The following year, the countries of Austria, Germany, Switzerland, and Denmark celebrated the very first IWD on March 19. Voting rights and the fight to end discrimination were at the forefront of most campaigns, but a mere week later, the Triangle Shirtwaist Factory Fire would kill 146 workers in New York City, shifting focus once again onto labor legislation and putting the horrific working conditions of garment workers under a microscope.

International Women's Day was observed on the last Sunday in February in 1913, with Russian women joining the fight to campaign for peace. IWD was moved to March 8 soon after, and in 1914 the date was marked with protests of solidarity for peace and women's suffrage in the time leading up to the beginning of World War I. International Women's Day would go on to be celebrated by the United Nations starting in 1975, and continue to make a strong impact in the lives of women. The Women's Strike will be held March 8, another important step in the long and arduous battle for gender equity.