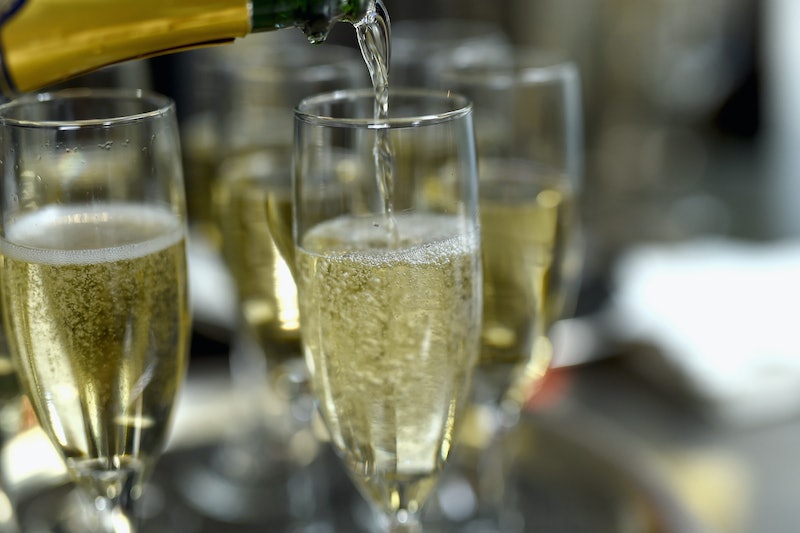 On New Year’s Eve, there are three givens: Realizing that you don’t actually know any of the words to “Auld Lang Syne,” making New Year’s resolutions that you may or may not intend to keep, and champagne. Lots of champagne. Why do we celebrate New Year’s with champagne? Why not regular wine? Or beer? Or neon, fruit-flavored cocktails? It turns out that champagne and celebration are a pairing that goes way, way back — and if you dip into the bubbly this New Year’s Eve, well, you’re only following tradition.

Champagne is associated with luxury these days, but when it was first produced centuries ago, the beverage’s telltale fizz was considered a bad thing. Early versions of champagne were produced when wine was bottled before fermenting completely; Wayne Curtis of Imbibe says that the bubbles were seen as ways to distract from less than stellar wines.

Although we tend to think of champagne as undeniably French (and, officially, sparkling wine must be from the Champagne region of France to earn the name “champagne”), a major breakthrough in champagne making came from an Englishman. In 1662, British physician Christopher Merret found a way to create sparkling wine by adding sugar to wine and inducing a second fermentation. For a long time, champagne was seen as a dangerous because bottles filled with it had a tendency to explode (In fact, in the 19th century, champagne makers had to wear metal masks to protect their faces from exploding bottles). Eventually, the development of stronger glass bottles and metal clasps to the secure corks made champagne more reliable, and less likely to destroy a cellar or take out an eye.

Despite (or perhaps because of) the riskiness of champagne, the fizzy wine became hugely popular among royals and the nobility. Louis XIV (1638-1715), the “Sun King” of France, was a huge fan of champagne, drinking it “almost exclusively,” according to CNN. This love of champagne, and its association with royalty and wealth, eventually trickled down to the middle classes, in what Curtis describes as “aspirational drinking.”

Over time, champagne became associated with celebration and was consumed at religious events like baptisms and weddings. Historian Kolleen M. Guy, author of When Champagne Became French, explained to Live Science, “After the French Revolution, it became a part of the secular rituals that replaced formerly religious rituals. You could ‘christen a ship’ without a priest, for example, by using the ‘holy water’ of champagne.” Guy notes that the appearance of champagne — sparkling, frothing over uncontrollably — is central to the perception that it is special and celebratory. “In a secular society, we want to mark both the joy and sanctity of the occasion,” she said. “Champagne does this symbolically, but also visually, since it overflows in abundance and joy.”

Champagne’s ubiquity on New Year’s Eve is also the product of savvy marketing. In her book, Guy writes that in the late 19th century,

Newspaper advertisements, particularly around holidays like Christmas and New Year, associated family gatherings with Champagne. One observer noted in 1881 that the increased use of champagne at festive gatherings was “a charming fashion that is beginning to be more common.”

By the early 20th century, champagne had become a must for New Year’s Eve; one French restaurant in New York, Martin’s, began insisting that it would only serve champagne after 9 o’clock on New Year’s Eve. (This push to get people to buy champagne was deliberate; one observer at the restaurant in 1910 said that waiters got a kickback for every bottle they sold.) Though champagne became less (legally) available during Prohibition, the fizzy wine has continued to be a staple of celebration.

It’s been a wild year, to say the least, so why not say “Goodbye” (or “GOOD RIDDANCE”) in style? Do your best impression of Louis XIV and let the bubbles flow.