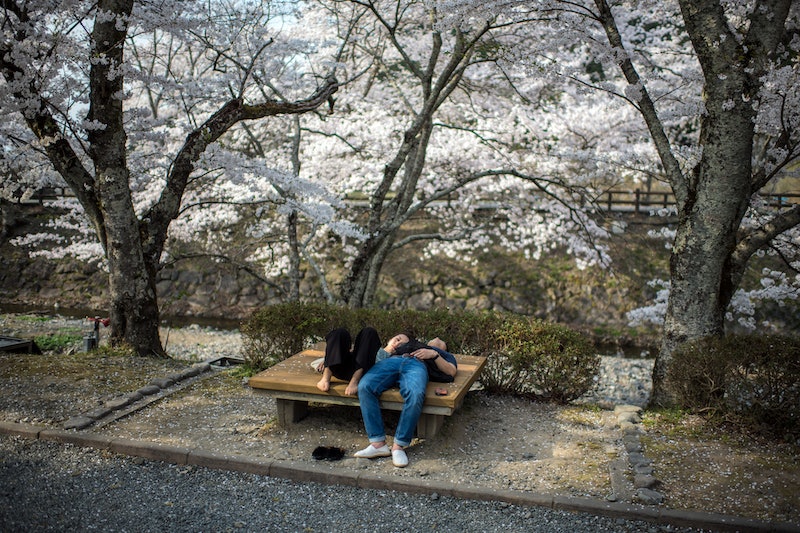 Boredom is something we all experience. The hours tick by, we're sluggish and unstimulated, and eventually we become desperate for something, anything, to break us out of our utter tedium. But defining the sensation of boredom precisely — and identifying why we get bored in the first place — is tricker than it seems. And at the roots of boredom are some big insights on human cognition and attention that might have given us a serious evolutionary edge. Yes, your inability to stay awake in math class may actually have a point to it.

Psychologist John Eastwood, a boredom expert and author of The Unengaged Mind, writes that it's “the aversive experience of wanting, but being unable, to engage in satisfying activity." It's not the same as sitting apathetically, daydreaming, meditating, or not caring about what's happening around you; it's an emotion that humans find it seriously unpleasant and try very hard to stop feeling. Studies in 2014 and 2015 found that we'll do basically anything to avoid boredom, including delivering ourselves small electric shocks (yes, really) and engaging in other self-destructive behaviors. People who are bored are very aware that they're bored, and are desperate for the sensation to stop.

Evolutionarily speaking, this makes sense. Humans, like many other animals, crave novelty; we're neophiliacs, or lovers of new things. Novelty helps us learn things, and from a very young age we seek out new experiences and things to interact with. Studies on the brain have revealed that we respond to completely new stimuli with a flood of dopamine, a "reward" that makes us feel good. It's part of the reason why humans are so curious: we're always on the lookout for things that give us that flood of good feelings. And that's been hugely advantageous to us in our history as a species. Curiosity over tens of thousands of years has helped us explore new tools, try new foods, and experiment and adapt widely. "What's that shiny thing? What can it do? Can I use it?"

From an evolutionary perspective, then, boredom is kind of a good thing — because, scientists say, it's motivational. People who know they're bored want to get out of their rut and find something to stimulate them. A study in 2011 found that people who were experiencing boredom were more likely than others to try "pro-social and meaningful behaviors." They were finding that their lives and actions lacked meaning, so they tried to do something different — and good came of it.

But it's not all about using boredom as a motivational tool. Actually sitting with boredom also has some advantages. The poet Joseph Brodsky gave a commencement address to Dartmouth College in 1995 in which he advised, "When hit by boredom, let yourself be crushed by it; submerge, hit bottom. In general, with things unpleasant, the rule is: The sooner you hit bottom, the faster you surface. The idea here is to exact a full look at the worst. The reason boredom deserves such scrutiny is that it represents pure, undiluted time in all its repetitive, redundant, monotonous splendor." And now scientists have backed up that advice. Sitting with boredom, they advise, can actually help unlock some creativity.

Often, it seems, our desperate pursuit of novelty and avoidance of boredom can lead to a depletion of our mental resources: we're focusing on twenty things at once without really giving any space to reflection. Studies in 2015 found that people who were bored actually did a bit better on creativity tests than people who felt relaxed. Giving the brain time to actually get bored, to sit and do some self-examination, and to inhabit the bored "brain-state" (scientists believe that boredom is a very distinct pattern of brain activity) appears to prompt creative thinking in some people. Some researchers think that you're more likely to get this benefit if you also possess some self-control, but there's a lot of research left to be done about how to best maximize boredom.

In an age where everything is catered to give us quick, accessible doses of novelty, it can be an interesting experiment to just, well, let yourself get bored. Sit, feel how unpleasant it is to have no stimulation, and then see what bubbles up. A long-submerged idea might just arrive at the surface.