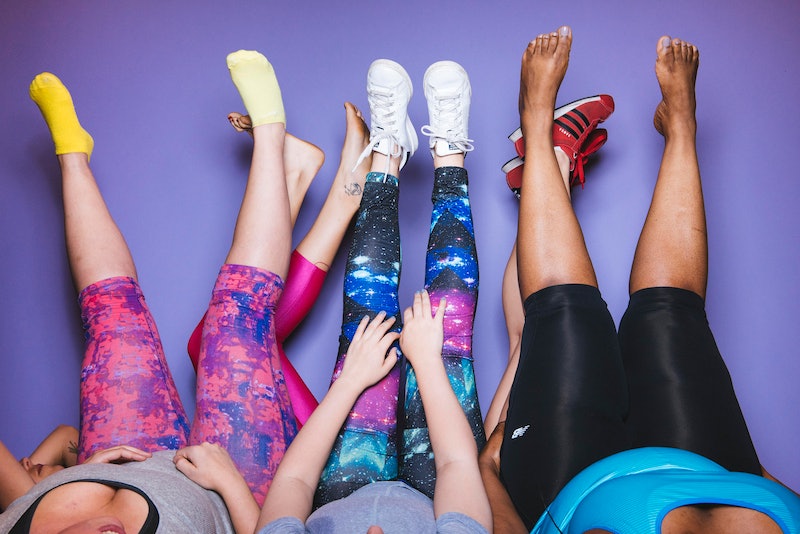 If your sibling ever annoyed you in grade school (or, heck, now) by taunting "I'm not touching you!" while holding their hand defiantly an inch or so from your nose, your discomfort, scientists say, came from their violation of your personal space. Personal space — that area around your body that feels intimate and "close" — is more complex than it seems on first glance. And various studies reveal that there's a good, evolutionary reason why we need personal space: we've established those "zones" to keep us safe.

Our definition of personal space alters depending on our interactions with others; what feels threatening or off with a stranger can feel perfectly fine with a partner or a friend — or not. And in most peoples' brains, this computation of personal space and where it stands in any given situation is happening constantly. Neuroscientist Michael Graziano told National Geographic in January, "The brain computes a buffer zone around the body, which is very flexible. It changes in size, depending on context, computed in a manner that’s largely unconscious." And the process by which we determine this space and whether somebody is "too close" is pretty fascinating.

New research published in PLOS One in March has backed up a central theory about personal space. In the new experiment, people were found to "expand" their personal space — the buffer zone that no strangers should cross — when they were exposed to the aggression of others, even if it wasn't directed at them. Participants listened to both an aggressive person talking and one with a neutral tone, and after both were played a recording of footsteps coming closer. They were told to signal when the footsteps got "too close." After listening to the aggressive conversation the footsteps felt "too close" quite far away, while the non-threatening person was allowed a lot closer. Feeling threatened means our "bubble" expands to keep people away.

This is't a surprise to researchers into personal space, because a study in 2009 found that the part of the brain that determines buffer zones is the amygdala. The amygdala is strongly related to our fear and anxiety responses, and in healthy brains, people getting too close will "set it off." This gives a clue as to the evolutionary origins of personal space. Humans have always been social animals who lived in groups, and maintaining a flexible, constant sense of personal space is a seriously good plan for being aware of threats in one's vicinity. It means we keep track of where people are and what we need to do to get away.

It's not all about fear, though. Experiments in 2017 also found that the neurotransmitter dopamine, which is associated with rewards and pleasure, had a strong role in determining if personal space was being violated. And, interestingly, the findings differed by gender. Male fruit flies needed more personal space when they had low dopamine, and less when they had a lot of it; female fruit flies, meanwhile, wanted more space whether they had too little or too much dopamine. It's not known if this happens in humans, but it may be that when we're enjoying somebody's company we let our guard down and let them closer — but that women may be less likely to feel comfortable doing this. More research is needed, however, in order to properly understand this connection.

Cultural understandings of relationships also affect how we determine our personal space. If you grew up in a culture that prioritizes family groups being all up in each others' grills all the time, or that allows for strangers to touch and greet you closely, you'll feel more comfortable and safe with small personal bubbles. If, however, your context values individual space, your own sense of safety and personal boundaries will alter, too.

And gender matters. As Graziano wrote recently in The Atlantic, personal space has huge relevance for this particular cultural moment of #MeToo. "One longstanding avenue for sexism is the exploitation of personal space for bullying," he noted. "It’s men looming in or getting handsy, pretending to own a woman’s personal space, asserting dominance." One of the biggest narratives of the #MeToo movement has been that women's experience of personal space is frequently one of violation, disrespect, and conscious or unconscious "getting too close."

The personal is political, and right now, personal space is more political than ever. So if you've ever wondered why your buffer zone is so important to you, science says it's keeping you safe — and that you're completely allowed to feel anxious around people who overstep it.